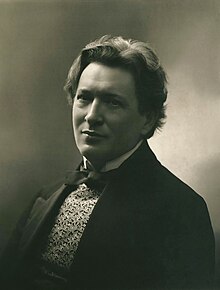 Ferruccio (Dante Michelangelo Benvenuto) Busoni (born April 1, 1866 in Empoli near Florence , † July 27, 1924 in Berlin ) was an Italian pianist , composer , conductor , librettist , essayist and music teacher . In addition to his own compositions, he transcribed and arranged numerous works by other composers. He has also published piano works by Johann Sebastian Bach and Franz Liszt . As a conductor, contemporary music was close to his heart.

Ferruccio Busoni was the only child of an Italian clarinet virtuoso and a German-born pianist from Trieste . Ferruccio grew up bilingual. He received his first lessons from his parents, who drove his early career and marketed his performances. Busoni began composing piano pieces at the age of seven - the first eight works in the Busoni Directory (BV) were written between June and October 1873. In November 1873 he made his debut as a pianist in Trieste with pieces by Mozart , Schumann and Clementi . In 1875 he appeared for the first time as a soloist in a piano concerto (Mozart's 24th piano concerto ). From the age of 9 to 11 he studied at the Vienna Conservatory . He continued to compose diligently: in the four years 1875 to 1878 he composed the works BV 15 to BV 98, including the four-movement Concerto for Piano and String Quartet in D minor, Op. 17 (BV 80) in March 1878 . In 1881, at the age of 15, he became a member of the Accademia Filarmonica in Bologna .

From 1886 Busoni taught at the Leipzig Conservatory . From 1888 he was a piano teacher at the Conservatory in Helsinki , where he a patron and friend of Jean Sibelius was. In 1890/91 he stayed in Moscow . There he married Gerda Sjöstrand (1862–1956), the daughter of a Swedish sculptor. The marriage resulted in the two sons Benvenuto and Rafaello .

After another stop in Boston (1891 to 1894), Busoni settled in Berlin in 1894 . From 1910 he lived in Berlin-Schöneberg on the fifth floor of the Viktoria-Luise-Platz  11 building, where a plaque commemorates him. He remained an Italian citizen. Italy announced after signing the secret London agreement on 4 May 1915. Triple Alliance and took effect on 23 May 1915 on the side of the Entente in the First World War one. Busoni became an "enemy alien" and therefore moved to Zurich .

In 1920 he returned to Berlin from exile and moved back into his apartment on Viktoria-Luise-Platz. Here he had a library with 5000 books, including 53 volumes with works by ETA Hoffmann and 176 Cervantes volumes. Until his death he taught a master class in composition at the Berlin Academy of the Arts .

Due to the inflation from 1914 to 1923 , Busoni lost all of his financial fortune. His health suffered from long years of copious consumption of wine and cigars. He ignored a doctor's warning that he wanted to ban alcohol and nicotine. His friend Jakob Wassermann , who last met him in December 1922 when Busoni was 56 years old, remembered him as an old man with a "rumpled" face and snow-white hair. Impoverished and aged prematurely, Busoni died at the age of 58. His grave of honor in the Schöneberg III cemetery in Berlin-Friedenau (Dept. 6–56) was designed by Georg Kolbe .

Busoni's early work shows the romantic background of composers such as Schumann , Chopin and Mendelssohn , later also Johannes Brahms , whom he initially met with respectful distance and whose F minor sonata he played in Vienna in 1884 in the presence of the critic Eduard Hanslick . The influence of the Handel Variations can be demonstrated in Busoni's early Chopin Variations op. 22 (BV 213); Brahms can also be heard in the concert piece op. 31 a (BV 236) from 1890, which Max Reger praised .

Unlike any other composer, however, Johann Sebastian Bach determined the pianistic and compositional-artistic development of Busoni, who later supervised the complete edition of his piano works at Breitkopf & Härtel and provided notes. The importance of Bach, who also worked on his own and other works, is evident in the contrapuntal structure of many compositions as well as in numerous transcriptions . The difficulty of some of the Bach arrangements is due to the high demands and sound ideas of Busoni, who wanted to raise the original compositions to the level of a virtuoso . His Fantasia contrappuntistica was seen as an attempt to “think through” Bach's work, which was probably conceived as a quadruple fugue, and to “forget” the piano in the process. Busoni replied to the criticism of his numerous changes, variants and extensions that he always considered the creative idea to be perfect, but not its musical or compositional implementation.

Already with his Elegien BV 249 , written between 1907 and 1909, a new beginning of his development is shown, which was interpreted by Busoni himself when he stated that he had put on his "very personal face" in them. With their expanded tonality and the bitonal approaches in places , they go beyond the usual functional harmonics of the time, just like the sonatinas , in which bitonal structures can also be found.

The works of Ferruccio Busoni were arranged thematically and chronologically in the Kindermann Directory (KiV), which is also called the Busoni Directory (BV).

Cover illustration for the orchestral suite for Turandot , 1906

Busoni's music theory text Draft of a New Aesthetics of Tonal Art from 1907 contains reflections on new tone scales, sixth tone systems and first glimpses of the possibilities of electrically generated sounds. The publication of the revised version in 1916 sparked heated controversy. The conservative Wagner admirer Hans Pfitzner reacted in 1917 with his polemical work Futurists Danger .

Letters from Ferruccio Busoni are in the holdings of the Leipzig music publisher CF Peters in the Leipzig State Archives .

Busoni's tomb in the cemetery in Berlin-Friedenau

Wikisource: Draft of a new aesthetic of music art  - sources and full texts