Wolpe was born in Berlin in 1902, enjoyed musical lessons at an early age and studied composition , counterpoint and harmony in his hometown . With his teachers (including Paul Juon ) he was soon bored with "constant fugue writing", so that the contact with Ferruccio Busoni, who started teaching in Berlin, must have been a revelation. A different aesthetic wind blew in his open discussion classes, giving Wolpe access to leading contemporary artists of his time, to Hermann Scherchen , the Berlin Dadaists and the Bauhaus in Weimar (where contact was made with Gertrud Grunow ).

Through Hans Heinz Stuckenschmidt , Wolpe joined the artists' association “Berliner Novembergruppe ”. a. Philipp Jarnach , Hanns Eisler and Kurt Weill were members. After some early expressionist works, Wolpe began to become politically active and wrote agitprop songs . In his work he took up suggestions from the Second Viennese School just as vitally as jazz , everyday music or later serial music . In 1926 the cabaret opera Zeus und Elida was created , which satirized Hitler's megalomania.

In 1928 Wolpe married the painter Ola Okuniewska , who from 1919 had been one of Johannes Itten's first students at the Weimar Bauhaus ; their daughter Katharina Wolpe would later become an important interpreter of her father's works as a pianist.

Politics put an abrupt end to the work of the Jews and convinced communists . Wolpe fled through various stops in Europe together with his second wife, the Romanian pianist Irma Schoenberg (later: Irma Rademacher) to Palestine , where he was not recognized because of his radical musical views. So he moved on to the USA in 1938, where he also had difficulties gaining a professional foothold. In the meantime he developed a complex dodecaphonic composition method , many of his works only bear the title music for ... or describe the composition technique ( study in the hexachord ). The union of heterogeneous elements, also in the organization of time, led to extremely difficult, rhythmically advanced works. However, many expressionist and tonal compositions were also created, such as the gigantic Battle Piece for piano written during the Second World War or the cycle of four Hebrew choirs . Wolpe felt the music of his people in "his blood", as he himself said, and was very happy about the work on this choral work, which was created for a competition. This primarily tonal music emerged like a lyrical island in the context of the style of musical simultaneity and sound-space compositions developed by Wolpe after the World War. 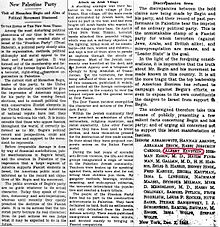 Declaration with the signatures of Irma and Stefan Wolpe

In December 1948, Stefan Wolpe, together with his wife Irma Wolpe and 24 other intellectuals, including Hannah Arendt and Albert Einstein , signed a letter to the editor to the New York Times that dealt very critically with Menachem Begin . Begin had raised money for his Cherut party and was labeled a terrorist and a fascist by the signatories.

Wolpe initially taught composition at the Music Academy and the Settlement Music School in Philadelphia . In 1948 he founded the Contemporary Music School in New York City, which taught composition for classical music and for jazz. Since the 1950s he worked primarily as a teacher in the USA, initially from 1952 at the avant-garde Black Mountain College near Asheville , North Carolina . The works Enactments and Symphony were created there . After the closure of Black Mountain College, he returned to New York. From 1952 he lived in his third marriage with the American poet Hilda Morley . His students included u. a. the pianist David Tudor and the composers George Russell , Johnny Carisi and Morton Feldman . From 1955 to about 1967 he was head of music at the CW Post College of Long Iceland University . In the 1950s and 1960s he also taught at times in Berlin and Darmstadt, there at the International Summer Institute. In 1963, Wolpe was diagnosed with Parkinson's disease , and until his death in 1972 he was only able to work in phases; Wolpe, who sat in a wheelchair, was only able to compose important late works such as Chamber Pieces No. 1 and 2, Form IV - Broken Sequences (for piano) and the quartet From here on farther (1969) thanks to new pharmaceuticals ( L-Dopa ) to be completed.

Due to his broken biography, the composer Stefan Wolpe was almost denied any meaning during his lifetime; he is one of the many German artists who went into exile in America during the Nazi era and never returned.

Wolpe is one of the most important voices of musical innovation in the 20th century. The paths that he treaded with his works are winding and varied, perhaps that is why he was denied recognition in the concert hall and among music lovers during his lifetime. Zeus and Elida had its German premiere in 2012 in the Gelsenkirchener Musiktheater im Revier .

Compositions (for example the piano work)

The piano was extremely important in Wolpe's work - piano compositions run through all creative phases and Wolpe himself was an excellent pianist with "cyclopean power" (Stuckenschmidt). He himself later combined the piano compositions of the 1920s into a cycle of six pieces. They provide information about Wolpe's sovereignty in various musical languages: Singing because I have to leave something expensive (1920) - dedicated to the Bauhaus artist Friedl-Dicker - is related to Schönberg's early piano pieces and his “colors” for orchestra, a spontaneous expressionist work.

The standing music (1925), the only surviving movement from Wolpe's 1st piano sonata, surprises with a rhythmic fireworks display that breathes the spirit of futurism and machine music - the title, on the other hand, suggests more: “[...] the concept of musical time becomes up to analyzed its limits ”(Stuckenschmidt on the idea of“ standing music ”), and the principle of repetition is the only“ theme ”of this work. The piece was premiered in a concert by the November group under the motto of "standing music". The tea served before the repetition of the works did not soothe; the destructively oriented concert, which is close to the Dada movement, turned into a scandal.

The smaller pieces Rag-Caprice , Tango (both 1927) and March No. 1 (1929) are rather sober pieces in the style of the new objectivity , abstract works in which the echoes of the original forms are reduced to fragments. A study of an all-interval series and one of his main works, the Battle Piece , written from 1943 to 1944 in the face of the war , in which Wolpe shows full emotionality, extreme images and formulates an almost half-hour indictment of solo piano accusation, later emerged .

In 1949 he was awarded a prize by the American Academy of Arts and Letters for his "original compositional work".

"... in recognition of his devotion to highest musical ideals expressed in his own music with striking originality ..."

Since 1966 he was a member of the American Academy of Arts and Letters.