Coming from a family of officers, Stuckenschmidt was the son of later major general Johannes Stuckenschmidt and his wife Clara Viktoria Helene, née Cerf. At the age of 19 he wrote music reviews as a Berlin correspondent for the Prague magazine Bohemia , then lived as a freelance music writer in Hamburg , Vienna , Paris , Berlin and Prague , advocated avant-garde music at an early age and got to know numerous composers and performers personally. In the summer of 1920 he took part in the First International Dada Fair . In 1923/1924 he led the concert cycle Neue Musik in Hamburg with Josef Rufer , lived in Vienna in 1924 and in Paris in 1925, where he became acquainted with the composers of the Groupe des Six . In 1927/1928 he helped organize the concerts of the Berlin November group , and in 1929 he succeeded Adolf Weißmann as a music critic for the Berliner Zeitung am Mittag . Many of his essays appeared in the beginning . Stuckenschmidt also had ambitions for composition, of the six short piano pieces that he wrote between 1919 and 1926, however, only two were printed in remote magazines. Since participating in Arnold Schönberg's analysis seminars from 1931 to 1933, he dealt with the composer's life and work and was the first to evaluate his estate for a biography ( Arnold Schönberg , 1951, 1957, 1974). He wrote books on Boris Blacher , Ferruccio Busoni and Maurice Ravel , among others . In 1932 he married the soprano Margot Hinnenberg-Lefèbre .

In 1934 he was banned from writing because of his commitment to new music and Jewish musicians. The trigger was a denunciation by Fritz Stege . The procedure was based, as Frank Hilberg judges, on "mostly unfounded accusations ('lack of moral maturity')". Hilberg continues: “The Nazi Fritz Stege had opened the Kesseldrive in 1933 and used all his connections to National Socialist organizations to get rid of Stuckenschmidt (and other advocates of new music). There is seldom the opportunity to understand such a process based on lies, denunciation and convictions in detail. The dimension of such arbitrary rule is oppressive - which not only lead to existential questions, but also affect family members. In 1934 Stuckenschmidt was expelled from the Reich Association of the German Press. " 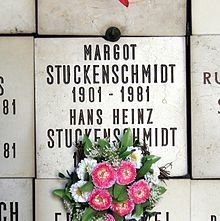 In 1937 Stuckenschmidt emigrated to Prague, where he wrote first for the Prager Tagblatt and from 1939 to 1942 for the occupation newspaper Der Neue Tag . In 1942 he was drafted into the Wehrmacht as an interpreter and released from American captivity in 1946.

After the end of the war, Stuckenschmidt became head of the new music department at the station RIAS Berlin, 1947 music critic of the Neue Zeitung , published the magazine Voices with Josef Rufer from 1947 to 1949 and was a lecturer since 1948, since 1949 associate professor and full professor of music history at the 1953-1967 Technical University of Berlin . From 1956 to 1987 he was a music critic for the Frankfurter Allgemeine Zeitung .

Stuckenschmidt received numerous awards for his work, he was a. a. Member of the PEN Club and the German Academy for Language and Poetry , Darmstadt . In 1974 he became a member of the Akademie der Künste Berlin (West), and in 1977 the University of Tübingen awarded him an honorary doctorate.

Stuckenschmidt was buried in the Wilmersdorf cemetery.

Wikisource: Deletion from the "professional list of editors"  - sources and full texts

President of the Society for New Music