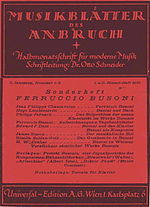 The Musikblätter des Anbruch (from 1929: Anbruch ) are an Austrian music magazine that became important for the development of new music . They appeared from 1919 to 1937 in 19 volumes with 165 issues and double issues with the Viennese music publisher Universal Edition (UE) and from 1935 with Vorwärts-Verlag .

The subtitle was bi-monthly for modern music , from 1923 issue 1 monthly for modern music , from January 1929 the name was shortened to dawn . From September 1930 the magazine was "combined" with lectern and baton without any further editorial comment. Since the January issue of 1935, the Anbruch has been listed as the Austrian magazine for music .

The first publisher, known as the editor , was officially Otto Schneider, with Alfred Kalmus being listed in the small print imprint from 1919 as the “responsible editor” and from 1920 on 16 Paul Amadeus Pisk . From 1922, issue 1, this task was passed on to Paul Stefan , who was also named editor-in-chief from volume 5 and remained so until the end of 1937.

The recipe for success consisted in letting composers write themselves and engaging leading critics - especially Paul Bekker , Theodor W. Adorno and Hans Heinz Stuckenschmidt - as well as eloquent musicologists. In the sheets, which are characterized by debates, polemics and fundamental articles, all terms of modernity are dealt with: “Music and machine”, colored light music, primitivism, folklorism, neoclassicism, atonality, jazz, world music and much more.

“Vienna 1919: still the capital, but marked with the stigma of the lost war, threatened by hunger, epidemics, upheaval, impoverishment, chaos. You save yourself for art, cling to music. ”This is how the editor Paul Stefan described the founding situation from the retrospective of 1935. The purpose of the magazine was to counter the sclerotized Viennese press - which had already expelled Gustav Mahler from Vienna - a journalistic organ . The young publishing house, Universal Edition, had signed dozens of composers from 1908 onwards who are today among the founding fathers of New Music, including: Bartók, Mahler, Schönberg, Schreker, Cassella, Webern, Zemlinsky, Berg, Szymanowski, Janáček, Krenek, Hába, Kodály, Weill, Hauer, Martinů, Eisler.

Guido Adler wrote the “escort” . And even in the first number, composers had their own say, including Franz Schreker ( Meine musikdramatic idee ), to whom the beginning was particularly closely connected: a total of 103 articles were published by and about him.

The basic structure followed the tried and tested structure of music magazines of that time and has proven to be stable, with new categories constantly being established and old ones being dropped. For the first issue and the coming editions these were: a “general part” with articles on music aesthetics ( Egon Lustgarten : Metaphysical sense of music theory ) and questions of pedagogy (Bernhard Paumgartner reform of music teaching ). A “special part” on certain works (Egon Wellesz on Richard Strauss' Frau ohne Schatten ), with memories (Oskar Fried's memories of Mahler ), festival reports ( Herbstspiele in Dresden ) and contributions by correspondents from other countries (Frederik Delius Musik in England at war ). This is followed by a glossary section (“Critique of Criticism”), “Meetings” with reviews of sheet music and books, later concerts and finally personal details. The booklets are rounded off by extensive advertising pages, mostly from the UE publishing house. Sheet music (in the first issue: Béla Bartók Allegro Barbaro ) were added irregularly .

In 1920 the special issue on Gustav Mahler was published, a 77-page book that was important for the first phase of Mahler's reception. It takes up rare aspects, for example when Alfred Roller writes about Mahler's productions, or a long article about Mahler's enemies and a short article about his friends. In the same year the important debate about Hans Pfitzner's pamphlet The New Aesthetics of Musical Impotence - A Symptom of Decay? (EA: 1919) with the contributions by Paul Bekker "Impotence" Or potency? and Alban Bergs The Musical Impotence of the “New Aesthetics” by Hans Pfitzner . Berg had already contractually agreed to work as the chief editor of the Musikblätter des Anbruch , but could not take it for health reasons.

In 1924, on the leap day [February], the magazine Der Abbruch was published, Faschingsblätter für neue Musik , a self-deprecating parody that was repeated again in 1925. The Schönberg special issue 1924 not only brings Alban Berg's famous essay Why is Schönberg's music so difficult to understand? , but also winged words like that of Hanns Eisler: "He is the true conservative: he even created a revolution in order to be able to be a reactionary."

From March 1925, the special issues were given a title graphic, but this was given up again in 1927. It was not until 1936, issue 4, that photographs were used to design the title. Most of the time, the magazine appeared with a simple typographical title page (which was only changed three times) and contained only a few illustrations and music samples. From 1926 onwards, the category “music automatons” in which records are discussed.

The year 1929 begins with a renaming: “The magazine begins its new year with a shortened name: it is no longer called 'Musikblätter des Anbruch', but just 'Anbruch'. There is no other - literary - dawn than the music sheets of which the magazine appears: in the readership, the sheet has long been known only as 'Anbruch' and there is no reason to officially call it anything other than its living name, since there is none Friend of the official. ”(1929 / H.1 / S.1) Adorno becomes a member of the editorial team from January; he immediately obliges Ernst Bloch to cooperate, who delivers a polemical essay with his essay Rescue Wagner by Karl May .

1930: “With the new rubrics 'Composition Criticism', the critical intentions of the sheet are to be accentuated more than before; the 'mechanical rubric' not only aims to journalistically follow a conspicuous trend in today's musical life, but also to shed light on what is actually meant by mechanization, to weigh up the tendencies of mechanization against each other, to influence program policy. "(1930 / H.1 / S.2)

Politics was only mentioned once in the music papers; in January 1931, Hans Heinsheimer described the cultural terror of the National Socialists in his article Neues vom Tage . Based on the schedule of the Weimar stage - in Thuringia a National Socialist interior minister ruled since January 1930 - he already casts a “look into the Third Reich”, with the conclusion that an unreasonable number of operettas and hardly any contemporaries are performed. He also reports on the dismissals of artistic staff who are not very popular and on the "pressure of fear".

Further political developments can only be read indirectly from the paper. In 1932 Josef Rufer reports on Leo Kestenberg's dismissal from the Prussian Ministry of Culture (1932 / H.9-10 / S.212), but 1933 passed without any major echo, the Reichsmusikkammer is not mentioned, “exile” is not a term. From the Austrian perspective, the Kulturkampf in Germany (with book burning, synchronization of the press, professional bans) seems to be far away and does not play a role in musical life. The "synchronization" of the dawn takes place slowly and without comment. Composers who have been cultivated for decades disappear between the lines, the longstanding editorial writers are suddenly gone. Schönberg - until then the central figure of the paper, which was not missing in any edition - is no longer mentioned after his emigration, Adorno made his last appearance in 1932, Bekker emigrated in 1933, Stuckenschmidt held out until 1934, Krenek even until 1938, the year Austria was annexed to the German Reich.

“More than before, we will endeavor to interpret the present through the past. That is why, and only because of this, we have replaced the now less informative term “Monthly Journal for Modern Music” with the more precise “Austrian Journal for Music”. It's just a label. The name remains. We still believe in the 'dawning' of something new, be it near or far and want to serve the present and the future of art. But for this will, as before, the content will have more to say than the title page. ”(1935 / H.1 / S.5).

With its best minds, the paper is rapidly losing importance. Reports from festivals, mainly the Salzburg Festival, and anniversary articles about great dead or mediocre composers replace aesthetic reflection and analytical consideration. 1936 Issue 4-5, the design is resumed with cover photos, it shows an Austrian politician, 1937 Issue 7 depicts the Salzburg Governor Franz Rehrl - whose importance for music remains in the dark. In December 1937, Stefan is optimistic about the upcoming 20th year, they have been successful and “we want to try to keep it that way for a while”. Those are the last lines, in 1938 Hitler completed the “Anschluss” and the publication of the Anbruch was stopped.