from Wikipedia, the free encyclopedia
This is the spotted version , flagged on July 30, 2020 . There is 1 pending change that has yet to be viewed. 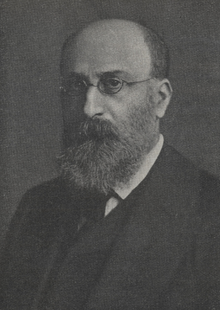 Guido Adler (born November 1, 1855 in Eibenschütz , Moravia , Austrian Empire , † February 15, 1941 in Vienna ) was an Austrian musicologist . He is considered the founder of Viennese musicology .

Guido Adler was the son of a country doctor, an older brother was director Leopold Adler . After the early death of the father of the family (1856), the mother moved with her six unsupervised children to Iglau , where Adler attended elementary school and received his first piano lessons. An imperial pardon and support from relatives enabled the family to make a living. In 1864 he came to Vienna, where from September 1869 he attended the Conservatory of the Society of Friends of Music in Vienna . His teachers were Wilhelm Schenner and Josef Dachs (piano), Anton Bruckner in harmony (as a minor) and Otto Dessoff (theory and composition). After graduating from high school in 1873, he also studied law , which he finished with a doctorate in 1878. However, he only worked as a lawyer for three months. In June 1874 he made his pianist diploma at the Conservatory. At first, however, he decided against a career as a composer .

With his classmates at the Conservatory Arthur Nikisch and Felix Mottl , he presented Richard Wagner with a trophy of honor. As the spokesman for the conservators, he addressed Franz Liszt . Adler was one of the founders of the Academic Wagner Club and, as such, held a cycle of lectures in 1875/76 on the introduction to the Ring of the Nibelung . The work of August Wilhelm Ambros , Friedrich Chrysander , Otto Jahn and Philipp Spitta aroused his musical-historical inclinations and after a short internship at the Vienna Commercial Court, he turned entirely to musicology. During his studies he was supported by the Viennese professor Eduard Hanslick .

In 1880 he received his doctorate from the University of Vienna. In 1884 Adler founded the quarterly journal for musicology in association with Philipp Spitta and Friedrich Chrysander , which he edited together with them during its ten-year existence. In 1885 he succeeded Eduard Hanslick as professor in Prague and founded the Musicological Institute of the University of Vienna in 1898 , of which he was director until his retirement in 1927.

In 1888, with a memorandum on the publication of Monumenta historiae musices on an international basis , he encouraged the editing of historical and theoretical documents and sources as well as monuments publications. It was initially limited to the monuments of music art in Austria, which appeared uninterruptedly in 83 volumes from 1894 under Adler's direction until 1938. In 1892 he organized the music history department of the International Music and Theater Exhibition in Vienna and induced the Austrian government to purchase the Trent Codices .

The Vienna Music History Institute, which he founded, became the focus of Austrian music research. The musicology studies published annually from 1913 to 1938 as supplements to the Monuments of Music in Austria brought valuable treatises from Adler's school. He organized the international musicological congresses on Haydn (1909) and the Beethoven Zentenarfeier (1927) in Vienna.

In 1927 he suggested the establishment of the International Society for Musicology with its headquarters in Basel, and served as its honorary president until his death. In the same year he resigned from the teaching post, but retained the direction of the monuments of music art in Austria until 1938 he was denied journalism.

In the time of National Socialism

In 1938 the Gesellschaft der Musikfreunde in Vienna, of which he was an honorary member, was effectively dissolved. It was first placed under provisional management and then affiliated with the Vienna State Theater and Stage Academy while retaining the name . During the time of National Socialism , his honorary membership was withdrawn due to anti-Semitic attitudes. Adler was also discriminated against in music in Herbert Gerigks Lexicon of Jews and entered there with a deliberately false date of death (December 14, 1933). His valuable library was confiscated at the instigation of his pupil Erich Schenk and assigned to the seminars he had founded without compensation to the heirs. After his death in March 1941, his daughter had him quietly buried in Vienna. This, the doctor Melanie Karoline Adler, was deported from Vienna to Minsk in May 1942 and murdered on May 26, 1942 in the Maly Trostinez extermination camp . His son Achim Adler was also a doctor and emigrated to the USA in good time.

Since the reestablishment of the Gesellschaft der Musikfreunde in Vienna in 1945, Guido Adler (like Bruno Walter , Carl Goldmark and others) has again been made an honorary member. In 1980 she was transferred from an ordinary urn field to a grave of honor at the Vienna Central Cemetery (group 32 C, number 51). In 1998 Guido Adler was dedicated to two of his own showcases by the Gesellschaft der Musikfreunde in Vienna in the exhibition “100 Years of the Institute for Musicology at the University of Vienna”.

Guido Adler was a quiet contemporary. At least that's how Gustav Mahler felt about him. Mahler is said to have said about him:

"If I want to be alone, I go for a walk with Guido Adler." 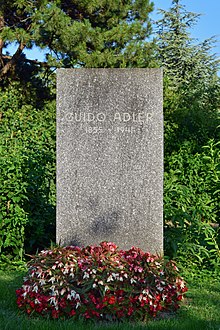 Grave of Guido Adler at the Vienna Central Cemetery