This article covers the city. For the river, see Jihlava (river) . For the Romanian community see Jilava .

Jihlava ( pronunciation ? / I ; German Iglau ) is a medium-sized town in the Czech Republic , which lies directly on the Bohemian - Moravian border. It is a center of the Vysočina region and the oldest mountain town in the Bohemian lands.

The city is located on the Bohemian-Moravian Highlands at the confluence of the Jihlávka ( Little Hedgehogs ) with the Jihlava ( Hedgehog ) River , which forms the old border between Bohemia and Moravia , about 78 kilometers west-northwest of Brno . The European route 59 (l / 38) leads through the city, which starts north of Jihlava on the D 1 / E 50 motorway .

Jihlava is an old Moravian mountain town where, according to legend, silver was mined as early as 799.

King Ottokar I set up a mountain chancellery and a mint. The city enjoyed a very early stage extensive privileges and was in 1250 by I. Wenceslas Premysl to the royal city levied.

The city and mining law Jura civium et montanorum , granted by the king in 1249, is the oldest known legal system that was enacted for a city administration whose economic basis was mining.

In the town hall there is a collection of old municipal and mining laws that can be dated to 1389. Iglau is also an old cloth-making town , whose cloths were famous for centuries.

Parts of the city fortifications have been preserved

Iglauer coat of arms in the Codex Gelnhausen

During the Hussite Wars , Iglau was - like Pilsen and Brüx - a center for Catholics. The city was spared from conquest and destruction, although the imperial-Catholic troops suffered a heavy defeat in January 1422 not far from Deutschbrod . The Iglauer Kompaktaten of July 5, 1436, a treaty with the moderate wing of the Hussites , marked the end of the Hussite Wars. This treaty recognized Emperor Sigismund as King of Bohemia, but had to make far-reaching concessions on his part.

A granite column near the town marks the place where Ferdinand I swore allegiance to the Bohemian landowners in 1527. From 1596 the town expanded its property considerably by purchasing the former Seelau monastery property on the left side of the hedgehog in Bohemia from the Trčka of Lípa . The acquired areas were combined as the New Good in Bohemia .

In 1625 the city sold the step-by-step part of the new property . During the Thirty Years War , Jihlava was conquered by the Swedes twice .

In 1742 Iglau fell into Prussian hands during the Silesian War . In December 1805 the Bavarian Army was defeated under Wrede near the city.

Before 1945, Iglau and its surroundings formed the second largest German language island in Moravia and adjacent to the Bohemian side of the border after the Schönhengstgau . In 1910 the city had 27,927 inhabitants, of which 21,756 were German or German-speaking and 5974 were Czech.

After the establishment of Czechoslovakia , the number of Czech inhabitants increased and in 1930 there were 31,028 inhabitants in Jihlava / Iglau, of which 17,968 were Czechs and only 12,095 were Germans. In the Jihlava language island and in some Czech and mixed villages in the area, a specific folk culture was preserved until the end of the Second World War. Musicians used original homemade instruments and groups of four fiddles and ploschperment . Typical dances were Hatscho / Hatschou, Indian ink and Radln . Peasant women liked to wear old “Pairic” costumes with little Šárkas , shiny dark aprons and large red scarves.

From March 16, 1939 to May 9, 1945 Iglau / Jihlava was a district town in the Protectorate of Bohemia and Moravia and the seat of a regional councilor . The German residents became German citizens, and a German local politician was appointed mayor. The aim of the National Socialist rulers was to turn Iglau into a German city . The Czech residents became members of the Protectorate .

A few weeks after the end of the Second World War , the German citizens were expropriated due to the Beneš decrees and, in some cases, were forcibly resettled on foot marches south to Austria, which were costly. The remaining German inhabitants of the Iglauer Sprachinsel were evacuated in 16 rail transports by September 26, 1946. Only a few were allowed to stay. The number of Germans from the Iglauer Sprachinsel who perished in 1945 is put at 2,000.

The assets of the Evangelical Church were liquidated by the Beneš Decree 131 and the Catholic Churches in Czechoslovakia were expropriated .

From 1951 Jihlava was the site of several communist show trials : They were directed against the influence of the church on the rural population and their cause was the murder of three local communist functionaries in Babice . In the trials, 11 defendants were sentenced to death and 111 defendants received long prison terms. Because of the speed of the trials, there is speculation as to whether the raid was commissioned by the State Security Service. All convicted persons were rehabilitated after the Velvet Revolution of 1989.

In protest against the Soviet occupation in 1968, Evžen Plocek burned himself on the market square during the Prague Spring . A plaque there commemorates his self-immolation . 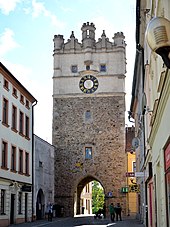 The historic city center was declared an urban monument reserve in 1982 .

The Jesuit Church of St. Ignatius with two towers and the Jesuit college next to the town hall were built by the Italian architect Jacopo Braschi between 1680 and 1727. In the nave, flat side chapels and oratorios are arranged in the typical Jesuit style on both sides.

The Mariensäule (plague column) at the Ringplatz was erected in the years 1686–1691 in place of the medieval pillory out of gratitude for overcoming the plague by Jacopo and Agostino Braschi. The statues of St. Francis Xaverius, St. Joseph, St. Sebastian and St. James are by Antonio Laghi.

The St. Jakobskirche is a Gothic three-aisled hall church with two towers, it is the main church of the city and was founded in 1243. In the south tower there is a large bell (approx. 7,400 kg) from 1564.

The Church of the Assumption of Mary is a monastery church of the former Minorite monastery near the Mother of God Gate, built in the 13th century with a three-aisled choir and ribbed vault.

The town hall was built in the 16th century through the expansion and inclusion of several houses with arcades from the 13th century, it is located on Masaryk / Ringplatz (36,653 square meters).

There are also town houses from the 13th to 16th centuries.

The city walls from the 14th century have largely been preserved. Of the original five city gates, only the Mother of God Gate remains. The fortifications were abolished in 1755.

The Mother of God Gate is the city's landmark and the only gate that has survived from the five medieval gates. It was built together with the fortifications in the 13th century and was renovated in 1853.

The catacombs make another cultural monument of the city. Its total area is 50,000 square meters and its length is 25 km, they are thus to Znojmo ( Znojmo ) is the second largest underground labyrinths in the Czech Republic. The tunnels are carved in the rock below the city on two to three floors at a depth of 2 to 14 m. Construction began in the 14th century and was carried out by experienced miners.

Other sights include the Church of St. John the Baptist , the former Dominican monastery with the Holy Cross Church, the Evangelical Paul Church , the Mount of Olives and the Holy Spirit Chapel , the Neptune Fountain and the Amphitrite Fountain on Ring- / Masaryk-Platz.

In Gustav Mahler house in the Znojmo Str. 4 (Znojemská ul.) Is Gustav Mahler grew up. There are notable tombs in the Jewish cemetery , including the gravestone of Gustav Mahler's parents.

The share of employment in agriculture has been falling steadily since the 1990s. 65 percent of the workforce is employed in the industrial sector. So he plays the most important role.

From 2018, Kronospan built Europe's first wood recycling plant in Jihlava. Here, old wood, for example from old furniture, should be prepared and processed into chipboard. In the city of Jihlava and the surrounding region, this project was viewed extremely critically, as increasing pollutant emissions from the release of formaldehyde and other chemicals in the waste wood to be processed were expected. Even before the plant was expanded, several residents complained of skin rashes and breathing problems. An increased number of cancers is associated with the Kronospan plant by the population. An environmental organization named Kronospan the second largest emitter of carcinogenic substances in the Czech Republic. In 2019 it was revealed that it is in the plant expansion Kronospans under Czech law a Schwarzbau to act. Kronospan denies these allegations. In the event of a legal violation, Kronospan would face a fine of the equivalent of 40,000 euros. In recent years, the company has had to pay twelve such fines for other offenses.

Jihlava Polytechnic , a non-university public university with around 600 students, has existed in Jihlava since 2004 .

→ Main article : List of personalities from the city of Jihlava