This article deals with the events of late 1989 in Czechoslovakia. The rose revolution in Georgia in 2003 and the revolution in Armenia in 2018 are also referred to by the term

Velvet Revolution ( Czech Sametová revoluce , Slovak Nežná revolúcia ) describes the political system change in Czechoslovakia from real socialism to democracy in November and December 1989. The term was chosen because the change, which took place within a few weeks, was largely non-violent.

On May 2, 1989, Hungary began to remove its part of the Iron Curtain on the border with Austria. The Hungarian Socialist Workers' Party had given up its claim to rule. In the summer of 1989 Hungary allowed many GDR citizens to leave for the Federal Republic .

In October 1989, up to 3,500 GDR citizens reached the premises of the Embassy of the Federal Republic of Germany in Prague ; A total of 17,000 people were allowed to leave for the West after negotiations. On November 9, 1989, Czechs and Slovaks were able to watch the fall of the Berlin Wall . A government headed by the non-communist Tadeusz Mazowiecki was already in office in Poland after the first halfway free parliamentary elections in the Eastern bloc took place on June 4, 1989 . On November 12, 1989, the Communist Party leader, Todor Zhivkov, who had been in office since 1954, was ousted in Bulgaria .

In 1988 and 1989 the first anti-communist demonstrations took place in Czechoslovakia. These include the candle demonstration in Bratislava on March 25, 1988 and a series of demonstrations from January 15 to 20, 1989 on the 20th anniversary of Jan Palach's death . These peaceful rallies were brutally suppressed by the police. 1,400 people were arrested, including Václav Havel , Alexandr Vondra and other opposition leaders .

From November 10-14, 1989, demonstrations took place in Teplice . On November 12th, a few days before the outbreak of the revolution, Agnes of Bohemia was canonized by Pope John Paul II . This event was broadcast on Czechoslovak TV . 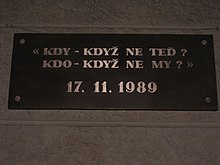 Memorial plaque in the Albertov district of Prague . When, if not now? Who, if not we?

On November 16, 1989, a student demonstration took place in Bratislava . The police did not intervene here and the demonstrators were able to roam the city unhindered. The next day, November 17, an approved student demonstration took place in Prague on the occasion of the 50th anniversary of the closure of Czech universities in 1939 , in which, according to the state security, 15,000 people took part. In contrast to Bratislava, the police broke up the rallies during the evening, injuring around 600 people. In the next few days the Prague students called for an indefinite student strike ; the actors from the Prague theaters joined them. These actions are generally seen as the beginning of the revolution.

Crowd of people on Wenceslas Square

On November 18, 1989, news spread of the brutal crackdown on the students by the security forces and the alleged death of the student Martin Šmíd, which mobilized large parts of the population to take part in the demonstrations. They called for an investigation into what was going on and those responsible to be punished. On 19 November 1989, the strikers was the mouthpiece in the Czech Republic , the Civic Forum ( Občanské fórum = OF ) and in Slovakia the Public Against Violence ( Verejnosť proti násiliu , VPN founded) to dialogue with the socialist seek rulers.

From November 20, the demonstrations gradually spread across the country. Every day there were demonstrations in numerous cities. Most of Prague's universities went on strike. The citizens' forum met to negotiate with the government. On November 21, General Secretary Miloš Jakeš announced on television that the government would stick to its uncompromising socialist line. People's militia units were drawn to Prague. The Prague Archbishop Cardinal František Tomášek called for support for the revolution. On November 22nd, two symbolic figures of the Prague Spring , Alexander Dubček and Marta Kubišová , appeared again in public for the first time in 20 years. In Prague, Bratislava and Brno there were thousands of people on the streets every day.

On November 24, Václav Havel and Alexander Dubček spoke to the demonstrators on Wenceslas Square and called for the resignation of the Politburo of the Communist Party of Czechoslovakia . On the same day, General Secretary Jakeš announced his resignation and the resignation of the Politburo. On November 25, President Gustáv Husák tried to calm the situation by granting amnesty to some political prisoners . The number of demonstrators in Prague is estimated at 800,000 and those in Bratislava at 100,000. The keychain became a symbol of gentle resistance. People held up keyrings and rattled them.

On November 27, the announced, nationwide two-hour general strike took place, which a large part of the population joined. Students in colleges and universities also joined this strike to varying degrees.

Negotiations between the citizens' forum and the government began on November 26th. The provision on the leading role of the Communist Party in the constitution was repealed on November 29th. On December 1st, a celebration of the changes took place in Bratislava, attended by tens of thousands. From December 5, the barbed wire on the border with Austria was removed, and from December 11, the border fortifications with the Federal Republic of Germany were removed.

On December 10, President Husák appointed the majority non-communist government of national agreement under Marián Čalfa for the first time since 1948 , after two governments he had appointed at the beginning of December encountered popular resistance. The new government's foreign minister was civil rights activist Jiří Dienstbier , and finance minister Václav Klaus . After the appointment of this government , Husák submitted his resignation on the same day.

On December 28th, Alexander Dubček was elected chairman of the parliament, on December 29th, 1989 the communist MPs elected Václav Havel as president. In October the communist Prime Minister Ladislav Adamec told Austrian journalists in Prague before visiting Vienna: For me, Havel is a zero . In January 1990, numerous Communist MPs resigned, most of whom were previously opposition members, so that the Communists no longer had a majority in parliament. On March 29, the democratic Czechoslovak Federal Republic was proclaimed. On June 8 and 9, 1990, the Czech National Council was freely elected for the first time. The Citizens' Forum (OF) received 49.5% of the vote and 124 of the 200 parliamentary seats.

The rapid upheaval in Czechoslovakia from a socialist dictatorship to a democracy brought difficulties on the one hand in dealing with communist officials, on the other hand in the return of private property, the privatization of state-owned companies and the transformation to a market economy . There were also major disagreements regarding the structure of the federation of the Czech and Slovak parts of the country. This dispute, known as the War of the Indents, finally led to the dissolution of Czechoslovakia on January 1, 1993 and the proclamation of the two independent republics of the Czech Republic and Slovakia .