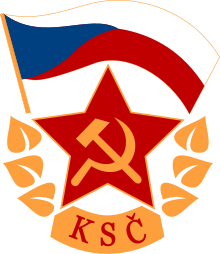 KSČ was established on May 14, 1921 by renaming a left wing that had split off from the Czechoslovak Social Democracy ( Československá sociální demokracie - ČSSD ). The first chairman was Bohumír Šmeral . In the parliamentary elections on November 15, 1925, the KSČ was the second largest party in the country after the Agrarian Party with almost 13% of the vote, 20 seats in the Senate and 41 seats in the House of Representatives .

At the end of the Second Republic (1938/39) the party was banned and continued to work illegally. An (initially) independent Communist Party of Slovakia (KSS) was founded in Slovakia . During the Second World War it initially accepted the liquidation of Czechoslovakia on instructions from Moscow. However, it later became a major force of resistance at home and abroad. 30,000 Czech communists were killed during the war .

As a resistance party, in 1945 it became part of the National Front of Czechs and Slovaks (Czech Národní fronta Čechů a Slováků , Slovak Národný front Čechov a Slovákov ) and a member of the first government of liberated Czechoslovakia. In the government, the communists had greater weight from the beginning, since the autonomous KSS was also allowed to send representatives there.

Already during the Second World War, the KSČ prepared the takeover and liquidation of the democratic parties in Czechoslovakia with the support of the Soviet Union and the CPSU .

The takeover of power began after the parliamentary elections in 1946 , from which it emerged as the strongest party. In the two multi-party governments Klement Gottwald I and Klement Gottwald II , headed by Klement Gottwald as Prime Minister, key positions in the army and police as well as the specially founded people's militia Lidové milice were filled with communists or their sympathizers. The KSČ had its agents and informants in all parties. In 1947, under the leadership of Gustáv Husák , she was able to enforce the partial dissolution of the Democratic Party , whose leadership concluded a support agreement with the representatives of the former Slovakia.

The party finally took power on February 25, 1948, the so-called February revolution . The National Assembly expressed its confidence in the reconstructed government under the leadership of Klement Gottwald with 230 votes from the representatives present.

The Czechoslovak National Socialist Party ( Československá strana národně socialistická ; not in the German “National Socialist” sense) was renamed the Czechoslovak Socialist Party and made up of supporters of the KSČ policy. Many functionaries of the social democratic ČSSD went into exile again after the coup. The remaining ČSSD under the leadership of Zdeněk Fierlinger was forcibly united with the KSČ at the so-called "Unification Party Congress on June 27, 1948 .

In the early days of the communist government from 1948 to 1954 , according to most sources, over 240 people were executed for political reasons, the numbers vary between 178 and (mostly) 246 or 248. Most of the trials were conducted before the state court established specifically for this purpose . Hundreds more died in prisons or trying to flee the country. Tens of thousands of people were imprisoned by the end of the communist regime in 1989. Unwanted citizens have been fired from their professions. A number of party members were executed in the wake of the intensification of the class struggle after Stalinist show trials , including Rudolf Slánský in December 1952 (he had been the general secretary of the KSČ from 1945 to November 1951).

Gustáv Husák , head of the Slovak state government from 1946 to 1950, was arrested in 1951 as part of the Stalinist purges. The political show trials continued after Stalin's death (March 1953); on 21./24. In April 1954 the trial of the so-called "bourgeois nationalists" took place. The main defendant was Husák. He was sentenced to a long prison term, given an amnesty in 1960 and rehabilitated in 1963.

The basic reform of the KSČ did not begin until the first half of the 1960s and culminated in the Prague Spring . Officially, the KSČ leadership strove for "socialism with a human face".

In April 1969 the reform leadership was replaced by centrists . Gustáv Husák reversed all reform projects with the help of orthodox ideologues such as Vasil Biľak . During the cleansing of the KSČ, the majority of the members were expelled. There were increased political sanctions. In particular, the persecution of the signatories of Charter 77 a few years later attracted international attention.

Successor organization to KSČ in the Czech Republic is the Communist Party of Bohemia and Moravia ( Komunistická strana Čech a Moravy , KSČM ).

In 1995 some former members of the KSČ founded a new party, initially called the Party of Czechoslovak Communists ( Strana československých komunistů ), from 1999 renamed the Communist Party of Czechoslovakia. This party's program is to restore the government that had ruled from 1948 to 1989. Its chairman (general secretary) was Miroslav Štěpán .