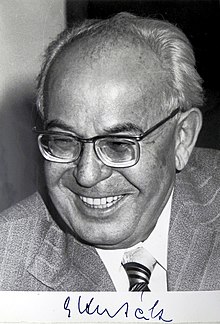 Gustáv Husák (born January 10, 1913 in Dúbravka , Austria-Hungary ; † November 18, 1991 in Bratislava , Czechoslovakia / ČSFR ) was a Slovak lawyer and communist politician . As General Secretary of the Communist Party of Czechoslovakia KSČ ( Komunistická strana Československa ) , Husák was the most powerful politician in Czechoslovakia from 1969 to 1987. He was one of the leaders of the Slovak National Uprising and was, among other things, Deputy Speaker of Parliament and Commissioner for Home Affairs. After the end of the Second World War he took on various offices in the party and was from 1946 to 1950 chairman of the "Commissioners Committee" (ie de facto the Slovak government). After he was arrested as part of the Stalin purges in 1950 and convicted of being a “bourgeois nationalist”, he was sentenced to long imprisonment (1950–1960). He was then gradually rehabilitated in the 1960s . After the suppression of the " Prague Spring ", in which Husák actively participated, he became General Secretary of the Communist Party of Czechoslovakia (1969–1987) and later became the first and only Slovak President of the Czechoslovak Republic (1975–1989); as such, he became one of the leading figures in the so-called “ normalization ”: after the “Prague Spring” he slowly but systematically restored the Moscow-loyal policy.

Party official in Slovakia, MP and loss of office

Gustáv Husák became a member of the Communist Youth Association in 1929 and of the Communist Party of Czechoslovakia in 1933 . After completing his law degree , he worked for a law firm from 1938 to 1942 , then as an employee of the Slovak Freight Forwarders Association. He continued his political activities even after the party was banned, and in the summer of 1943 he became a member of the three-man leadership body of the illegal CP, of which he was a member until the founding of the Communist Party of Slovakia KSS ( Komunistická strana Slovenska ) in September 1944. Husák appeared publicly as the leader of the Slovak communists during the Slovak National Uprising and headed the interior department of the insurgent government (1944–1945). On September 17, 1944 he was next to Ján Čech deputy of Karol Šmidke , the chairman of the KSS. From October 21, 1945 to May 16, 1946, he was initially a member of the post-revolutionary provisional National Assembly (Prozatimní Národní shromáždění) and from May 26, 1946 to May 29, 1948 a member of the Constituent National Assembly (Ústavodárné Národní shromáždění) . He then became chairman of the "Commissioners Committee" de facto head of government of the Slovak state government (1946-1950) and was a member of the National Assembly (Národní shromáždění) between May 30, 1948 and February 6, 1951 .

In May 1950 he was removed from office on charges of " bourgeois nationalism ", arrested in February 1951 and sentenced to life imprisonment in August 1954 as the main defendant in the trial against bourgeois nationalists and held in Leopoldov Prison . In 1960 he was amnestied and in 1963 fully rehabilitated . Until 1968 he worked at the Institute for State and Law of the Academy of Sciences .

Prague Spring and election to the General Secretary of KSČ 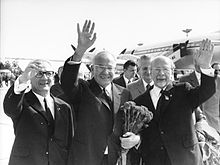 After Alexander Dubček was deposed , Gustáv Husák was elected First Secretary of the Central Committee of the Communist Party of Czechoslovakia on April 17, 1969 under pressure from the Soviet Union and gradually eliminated the reform results of the Prague Spring. At the XIV Party Congress of the KSČ (May 25 to 29, 1971), which has now been formally made up, he was elected to the renamed office of General Secretary of the KSČ Central Committee. In this capacity he was on the XV. Party Congress (April 12-16, 1976), the XVI. Party Congress (April 6-10, 1981) and the XVII. Party congress (March 24-28, 1986) confirmed as a member of the Presidium of the Central Committee and the Secretariat of the Central Committee. At the XIV Congress he thanked the Soviet Union for the “fraternal help” of the invasion to put down the Prague Spring. On November 27, 1971, he was again a member of the Federal Assembly and was a member of it until May 29, 1975. However, he was now a member of the People's Chamber (Sněmovna lidu) , to which 200 members were elected in general, equal and direct elections throughout the territory of Czechoslovakia.

Miloš Jakeš succeeded Husák as general secretary of KSČ in 1987.

On May 29, 1975, Gustáv Husák took over the office of President from Ludvík Svoboda .

A Charter 77 signed by 257 citizens on January 5, 1977, referred to the Helsinki CSCE provisions also signed by Czechoslovakia, called for the realization of documented human rights, whereupon the signatories were put under pressure by the government. In the second half of 1977 economic difficulties such as price increases for consumer goods and an energy gap put him under pressure himself, particularly from the dogmatic wing in the party. It was not until December 1, 1977 that his position was strengthened again when the new Central Committee Secretaries Miloš Jakeš , Mikuláš Beňo and Jindřich Poledník and the chairman of the Central Audit Commission, Miroslav Čapka, were transferred. In December 1978 the Central Committee of the KSČ decided under his leadership to "purge" the party again.

As General Secretary of the Communist Party, he was replaced by Miloš Jakeš on December 17, 1987. From November 17, 1989 he came under increasing pressure due to the mass protests of the so-called Velvet Revolution and finally appointed a new government under Marián Čalfa on December 10, 1989 , in which the Communist Party no longer had a majority (members included Václav Klaus and Jiří Dienstbier ). On the same day he resigned as President. Václav Havel was elected to his successor on December 29, 1989 .