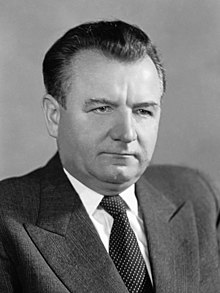 In the mid-1920s he was responsible for the so-called "Bolshevization" of the CPC, i. H. for their subordination to the Communist International (and thus the CPSU). He was chairman of the KSČ (1929-1948). From 1928 he was a member of the Executive Committee of the Communist International (KI, Comintern for short). In 1929 Gottwald was elected to the Central Committee and Politburo and General Secretary of the Communist Party of Czechoslovakia . 1929-1939 and 1945-1948 Gottwald was a member of the National Assembly. After the Second World War he was first prime minister (1946–1948) and after the February coup the first communist state president of Czechoslovakia (1948–1953).

Gottwald's Stalinist regime is considered to be the most repressive period of the communist dictatorship in Czechoslovakia. Between 1948 and 1954, 178 people were executed on political grounds. Others died in labor camps and uranium mines or were murdered by the StB secret police without trial . In addition, Gottwald took rigorous action against religious institutions and against - actual or supposed - internal party rivals.

Klement Gottwald, an illegitimate child of agricultural worker Marie Gottwaldová, attended elementary school and learned to be a carpenter in Vienna. He soon oriented himself towards social democratic youth associations. From 1914 to 1918 he served in the Austro-Hungarian army , from which he finally deserted. After the establishment of Czechoslovakia in 1918, he served two years in the new Czechoslovak Army . After 1920 Gottwald was active in the union of the workers gymnastics clubs and as an editor of local communist newspapers. At this time he held his first functions in the Communist Party, partly in Slovakia.

Gottwald was married to Marta Gottwaldová, née Holubová, with whom he had the daughter Marta; she later married the Minister of Justice and Defense Alexej Čepička .

Gottwald succumbed to alcohol in the last years of his life and suffered from syphilis . He died of an aortic aneurysm ruptured a few days after his return from Moscow, where he had attended Stalin's funeral ceremonies . His body was of Soviet experts - along the lines of Lenin - mummified and in a glass coffin in the originally for Thomas Garrigue Masaryk provided mausoleum at the " National Memorial at Vitkov Hill " (Czech Národní památník na Vítkově ) in Prague's Zizkov issued. In 1962, Gottwald's body was cremated due to the changed political situation and the abolition of the " personality cult " ( de-Stalinization ). His urn was removed from the mausoleum after 1989 and buried in the Olšany Cemetery in Prague.

After 1920 Gottwald was active in the Union of Workers' Gymnastics Clubs and as an editor of local communist newspapers in Moravia and Slovakia such as Pravda chudoby , Hlas ľudu and other proletarian press organs. At this time he held his first functions in the Communist Party, partly in Slovakia. From 1926 Gottwald worked in the Prague party secretariat and from 1926 to 1929 was head of the agitation and propaganda department of the Central Committee of the CPTsch. During this time he began to form a Moscow-oriented opposition in the party, which until then was considered relatively independent. From 1928 Gottwald was a member of the Executive Committee of the Communist International (KI, Comintern for short).

At the peak of his career, after the February revolution of 1948, Gottwald established a communist party dictatorship in Czechoslovakia and asserted himself as a dictator against his former comrades-in-arms; the historian Karel Kaplan called him the "dictator without sovereignty".

Gottwald is responsible for the Stalinist orientation of the KPTsch. The Czechoslovak Communist Party was one of the largest and strongest communist parties in Europe, but it retained a certain degree of independence and was unwilling to follow all the directions and orders of the Comintern and Moscow. From 1926 onwards, Gottwald, who saw Stalin as a role model, formed a Moscow-loyal opposition within the party. At the 5th party congress of the Communist Party of Czech Republic in February 1929, he completed the so-called Bolshevization: he and his followers, the so-called boys of Karlín (Czech "karlínští kluci" - Josef Guttmann , Jan Šverma , Rudolf Slánský , Václav Kopecký , Pavel Reiman and others), took over power in the CPC and subsequently oriented the party rigorously along the lines of the Comintern and the CPSU. Gottwald became a member of the Central Committee and the Politburo and was elected Secretary General.

In order to distinguish himself accordingly, Gottwald showed on various occasions what he was thinking and planning. In his party congress speech he described - in the spirit of the theses of VI. Congress of the Comintern - the then Czechoslovakia as an "imperialist state" and the social democrats as "social fascists" and further claimed that the domestic bourgeoisie under the leadership of President Masaryk was planning a fascist overthrow. A few months later, in his first speech in parliament on December 21, 1929, he announced: “Yes, we are learning from Moscow how to get your neck turned on”.

The consequences were grave: 14 MPs and 14 senators left the party, the Trotskyist faction with Gottwald's former friend, Július Verčík , said goodbye. From 1928 to 1930 a total of 125,000 party members left the KPC, i.e. H. five sixths. The trade union movement split. Highly valued communist intellectuals such as Ivan Olbracht , Stanislav Kostka Neumann and Vladislav Vančura wrote the Manifesto of Seven, which was highly regarded at the time, in protest against the new line .

After the Munich Agreement of 1938, when Czechoslovakia had to cede its border areas (Sudetenland) to Germany, the KPTsch was banned under pressure from Berlin and Gottwald went into exile in Moscow. Here he was at the head of the leadership bodies of the CPC until the end of the war and planned to return and take power in the future Czechoslovakia. The following decisions helped him:

After the end of the war, Gottwald was indeed able to have a decisive influence on the shaping of Czechoslovakia.

After the end of World War II and the liberation of Czechoslovakia, Gottwald took over the post of Deputy Prime Minister in the Fierlinger I government and then in the Fierlinger II government in April 1945 ; After the parliamentary elections in 1946 , from which the KPTsch emerged as the strongest party, Gottwald installed the Gottwald I government , which ruled until the February revolution of 1948. The foundations of this development, in particular the project of the unified National Front and the Kaschau program , stem from Gottwald's negotiations with the London government in exile. The National Front de facto excluded from the elections (and thus also from participation in the government) all parties that the Communist Party did not like, including participants in the resistance. “Beneš and his non-communist friends overlooked the fact that the 'limited plurality' of the national front harbors the germ of development towards totality”, or as the Czech historian Kaplan judged: The purpose of the Gottwald National Front was to provide access to communist autocracy to level. Among other things, the decision as to which parties would be admitted in the future fell within the competence of the National Front. The government program of 1945, known as the Kaschau program, already envisaged profound social changes, which ended with the establishment of a people's democracy; as a foreign policy concept it envisaged the orientation of Czechoslovakia towards the Soviet Union.

After the end of the war and up until the February revolution in 1948, the CPC concentrated on carefully preparing for the Communist takeover. In addition to the Kaschau government program and the National Front, the following specific projects were involved:

In some cases, even in this phase, targeted actions against political “opponents” that were supposed to be eliminated. This included in particular the case of the “conspiracy in Slovakia”, as the cause of the Demokratická strana (Democratic Party) was called. This party, which in the parliamentary elections in Czechoslovakia in 1946 gained twice as many votes as the Slovak communists in the Slovak part of the state with 62 percent, was accused of conspiracy and, at Gottwald's behest, gradually overthrown and liquidated.

In early 1948 there was a government crisis. The communist interior minister Nosek wanted to replace eight non-communist police functionaries in Prague with communists. On February 20, 1948, the twelve non-communist members of the government resigned in protest in the hope that this would lead to new elections. However, since the government consisted of 26 ministers, it could not be formally dismissed because the resigning ministers were only a minority, and President Beneš was also reluctant to accept the resignation. Gottwald took advantage of the situation to initiate the communist takeover, later known as the February coup. From Sunday, February 22, 1948, Beneš received reports that arming the so-called People's Militia had a number of violent consequences. These paramilitary combat units made up of members of the CPC formed from the former workers' militias. They took part in the occupations of the party headquarters of non-communist, democratic parties and in the arrests of their members, which happened under the pretext of an impending counter-revolution. On February 24, 1948, Gottwald threatened to arrest the resigned ministers in the event that their resignation by President Beneš - constitutionally - should not be accepted; At noon a one-hour general strike took place to emphasize Gottwald's demands. On February 25, 1948, Gottwald visited the president and gave him a list of ministers whom he selected for the new government. Meanwhile, a large demonstration was being prepared and around 6,000 armed militiamen stood ready to march into the center. At 4.30 p.m. Gottwald visited the president again, who accepted the resignation of the non-communist ministers - unconstitutionally - and appointed a new government that complied with Gottwald's proposals. Gottwald went to Wenceslas Square, where a crowd of around 100,000 demonstrators cheered him.

With the establishment of his Gottwald II government , which was accepted by Beneš on February 25, 1948, Gottwald laid the last cornerstone for the establishment and consolidation of communist sole rule in Czechoslovakia. After that, only the logical consequences happened:

In addition, the so-called action committees of the National Front (akční výbory Národní fronty) dominated by communists, which Gottwald launched on February 21, became the actual power-political center in the country: Their primary task was to add the so-called "anti-communist elements" eliminate.

In the period that followed, under Gottwald's state and party leadership and responsibility, a rigorous apparatus of repression was launched and expanded. On the basis of the “Law for the Defense of the Republic” (Law 231/1948 Coll.), 232 people were sentenced to death in political show trials between 1948 and 1954 before the so-called and for this purpose established Státní soud (State Court), both from October 1948. 178 people were executed (the largest number of executions in the countries of the then Eastern Bloc at the time); Another estimated 100,000 people were sentenced to several years' imprisonment (some without trial), tens of thousands of people were taken to labor camps, and tens of thousands more were obliged to do forced service in the so-called camps for military forced labor - the Pomocný technický prapor . The best-known political show trials included the trial of General Heliodor Píka , Milada Horáková and the Slansky trial of Rudolf Slansky and 13 other high party officials and members of the government, as well as crackdown on opponents of collectivization, such as the Babice and Jan Bula cases .

Banknote with picture of Gottwald

In 2005, Gottwald was voted the most unpopular Czech in an opinion poll conducted by the Czech television station Česká televize .