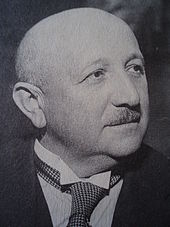 Rudolf Beran came from a small Czech family of farmers. In 1918 he was a member of the first National Assembly of the Czechoslovak Republic. Soon afterwards he became general secretary of the Czechoslovak Agricultural Party , and after the death of Antonín Švehla in December 1933 also its chairman. After Edvard Beneš's resignation as a result of the Munich Agreement in October 1938, the Czech part of Czecho-Slovakia was transformed into an authoritarian two-party state on Beran's initiative. The ruling party became the Party of National Unity . From December 1, 1938 Beran officiated as Czechoslovak Prime Minister . After the invasion of the Wehrmacht and the so-called smashing of the rest of the Czech Republic in March 1939, he initially remained in office. He was replaced by Alois Eliáš on April 27, 1939 and withdrew into private life. After the end of the Second World War , he was sentenced to 20 years imprisonment for collaboration in a trial manipulated by the Communist Party of Czechoslovakia (KSČ) before the newly established Národní soud (National Court), which ran from January 30, 1947 to April 21, 1947 . He died in Leopoldov prison in 1954 .