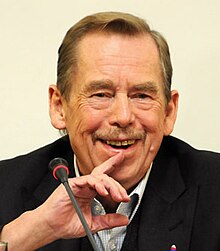 Vaclav Havel [ vaːt͡slaf ɦavɛl ] (* 5. October 1936 in Prague , †  18 December 2011 in Vlčice-Hrádeček , Trutnov District , Královéhradecký kraj ) was a Czech playwright , essayist , human rights activists and politicians who during the rule of the Communist Party of was the leading critic of the regime in Czechoslovakia and was one of the initiators of Charter 77 . He is one of the pioneers of German-Czech reconciliation. After the Velvet Revolution , in which he played a key role, he was the last (ninth) President of Czechoslovakia from 1989 to 1992 and the first of the Czech Republic from 1993 to 2003. He was also a member of the Obec spisovatelů community of writers and an honorary member of the Club of Rome . 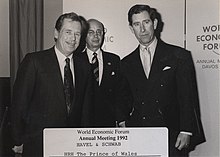 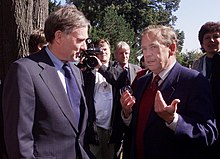 Havel came from an influential Prague bourgeois family . His grandfather ( Vácslav Havel ) built the famous Lucerna amusement complex on Wenceslas Square in Prague , and his uncle built the Barrandov film studio in Prague .

With the beginning of the communist government of Czechoslovakia in February 1948, the property of the Havel family became state property. The young Václav was not allowed to attend secondary school after completing compulsory schooling in 1951, worked as an assistant in a chemistry laboratory and completed secondary training in an evening school. He also worked as a taxi driver to finance evening school attendance. Not admitted to any humanities faculty for political reasons, he began studying economics at the Technical University of Prague in 1954, which he dropped out after two years.

After another two years, during which he did military service in the Czechoslovak People's Army , in 1959 he found work as a stage technician in two small Prague theaters, the Divadlo ABC and the Theater am Geländer , where he was subsequently a lighting technician , secretary, lecturer, dramaturge and finally “ In-House Author "became. In 1963, the first independent stage work was Das Gartenfest , the German premiere of which took place in October 1964 in the workshop of the Berlin Schiller Theater. The notification followed in 1965 , which in turn premiered there in Germany. Since he was 20, Havel has also been writing articles for literary and theater magazines. His plays and articles, which are in the tradition of absurd theater , shaped and show the atmosphere that led to the Prague Spring in 1968 .

Famous plays by Havel from this period are The Memorandum (1965) and the Difficult Possibility of Concentration (1968), which arose from the thesis of his distance learning at the theater faculty from 1962 to 1966. In 1967 at the 4th Writers' Congress in Prague, Havel first caused a political sensation when he publicly criticized the censorship and the absurdity of the Communist Party's power apparatus.

During the Prague Spring 1968 he was chairman of the “Club of Independent Writers” and became the most prominent and consistent spokesman for the non-communist intellectuals who supported the reform process initiated by Alexander Dubček .

During the so-called " normalization " after the crackdown on the Prague Spring by Warsaw Pact troops , Havel repeatedly spoke out against the regime under President Gustáv Husák and in 1977 was one of the three main initiators of Charter 77 , a civil rights movement that began in the late 1970s and in became the center of opposition in the 1980s.

During this time, Havel was arrested three times and spent a total of about five years in prison. The letters to Olga , his wife Olga, née Šplíchalová, whom he met in 1956 and married in 1964 and who was his partner until her death in 1996, are literary evidence of this period . Havel's prison sentences were not suspended until 1983 after international protests when Havel fell ill and was subsequently discharged to a public hospital.

After the occupation by the Warsaw Pact troops in August 1968, Havel opposed communist harmonization and was banned from performing and publishing in Czechoslovakia . Almost all of his works were published by Rowohlt Verlag in Germany during this time . On January 16, 1989, the 20th anniversary of Jan Palach's self-immolation on Wenceslas Square in Prague, Havel wanted to take part in a commemorative event, was arrested and sentenced to nine months' imprisonment for repeat offenders on February 21 for "hooliganism". When he wanted to receive the Peace Prize of the German Book Trade in Frankfurt am Main, he was not allowed to leave the country. The actor Maximilian Schell read his prepared speech.

Havel was one of the leading figures in the Velvet Revolution in Czechoslovakia, which was initially supported by students and artists . Before that, in the 1980s, when the political climate became somewhat more liberal, he helped initiate the petition Some sentences (“Několik vět”). Now he became the leading representative of the Občanské fórum (OF) citizens ' forum founded during the revolution (on November 19, 1989 ). The upheaval in the political situation in Czechoslovakia was practically sealed when Havel, as a candidate for the Citizens' Forum, was elected President on December 29, 1989 by the - until then communist - representatives of the Federal Assembly. In this capacity he led the country to free elections on July 5, 1990. The new parliament confirmed him as non-party president.

During his tenure as head of state of the Czech and Slovak Federal Republic - the new name of the state - the clashes and controversies between the Czechs and the Slovaks increased. Havel's attempts to maintain the Federation were unsuccessful.

In the next presidential election on July 3, 1992, Havel did not get a sufficient number of votes from the MPs and resigned, although according to the constitution at the time he could have held the government office three months after the end of his term of office. The main reason for the defeat in the vote was that he had spoken out in favor of maintaining a common state of the Czechs and Slovaks and condemned special national efforts. In the vote, therefore, he lacked votes from the Slovak MPs. 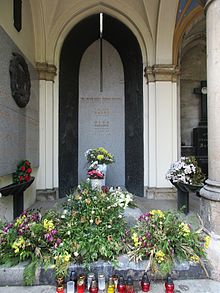 Václav Havel was a staunch European who relied on European integration. The EU summit held in Copenhagen in December 2002 laid the foundation stone for the integration of the Czech Republic into the European Union as Havel's achievement.

Since 1997 he was married to the actress Dagmar Veškrnová in his second marriage .

From 1995 to 2000 he was a member of the jury of the International Nuremberg Human Rights Prize .

Havel died at the age of 75 on December 18, 2011 at his country estate in the north Bohemian town of Hrádeček (municipality of Vlčice ) near Trutnov in the Giant Mountains as a result of a respiratory disease that he had suffered from numerous prison stays. In addition, a tumor and part of his right lung had been removed because of a diagnosed lung cancer in 1996. He was honored with a state ceremony and the urn with his ashes was buried in the Vinohrady cemetery in Prague.

Vaclav Havel is a representative of the theater of the absurd , and his stories are in its tradition.

Defining basic theme in Havel's dramatic how essayistischem work - as the cause of absurdity - was the alienation of modern man from the said by him living environment , an ideal of the people on earth. This is caused by the fact that in the enlightened progressive society science has taken the position of the highest authority, which was previously reserved for the unknown higher ( God or similar). Havel saw this alienation as the cause of the problems of modern mankind with the destruction of the environment, which was brought about by a mechanization of the economy made possible by science; but also in the former dictatorships of communism and their idea of ​​a scientifically organized, equal livelihood society ( scientific socialism ) , an extreme form of alienation. In Havel's opinion, a society based on lies , in which words lose their meaning, such as the inflationary word peace in the Eastern Bloc , which in this system of government actually only meant maintaining the status quo and thus maintaining the power of the alliance, testifies to this. In his plays, Havel showed the absurdity of this situation. The theme of alienation in the world dominated by science is consistently evident in his essays. According to his own admission, Havel was influenced in this idea by the Czech philosopher Václav Bělohradský .

Vaclav Havel is considered one of the most important advocates of German-Czech reconciliation. As early as 1990, he was the first significant Czechoslovak politician to condemn the expulsion of Germans from Czechoslovakia after 1945, which brought him hostility in Czechoslovakia . January 21, 1997, he signed together with the German Chancellor Helmut Kohl , the German-Czech Declaration to address without compensation issues which victims NS from the time of his fierce criticism of both the Czechoslovak Protectorate as well as the expellees Association of Sudeten Germans brought.

Large-scale quote from Václav Havel about hope , found on the gable wall of a block of flats in Weimar on Ettersburger Strasse (out of town, right)

Havel's literary and dramatic work as well as his lifelong pursuit of the preservation of human rights has been recognized with a number of literary awards, international prizes and honorary doctorates.

On October 15, 1989, Havel received the Peace Prize of the German Book Trade in absentia . It was not possible for him to take part in the ceremony in the Paulskirche in Frankfurt , as he was refused entry. Instead he asked his friend Maximilian Schell to deliver the speech he had written.

In 1990 he received the prize The Political Book from the Friedrich-Ebert-Stiftung . Also in 1990, Havel in Switzerland was honored with the Gottlieb Duttweiler Prize for his political work, the laudation by Friedrich Dürrenmatt shortly before his death left Switzerland deeply moving. In 1990 UNESCO awarded him the Simón Bolívar Prize . In 1991 Havel was honored with the international Charlemagne Prize in Aachen "in recognition of his commitment to the spirit of freedom and the realization of peace in his country and throughout Europe". 1993 awarded him the Theodor Heuss Foundation the Theodor Heuss Prize in recognition of its democratic commitment and his moral courage. In 1995 he was awarded an honorary doctorate from the Technical University of Dresden . In 1998 Havel received the International Peace Prize of Westphalia . He received the international Adalbert Prize in 1999. In 2000 Havel was honored with the French Prix ​​mondial Cino Del Duca , since 1991 Havel has been an honorary member of the American Academy of Arts and Letters , since 1995 a member of the American Philosophical Society and since 2001 an honorary member of the American Academy of Arts and Sciences .

In 2002 he was awarded the Hans Sahl Prize for his literary life's work and was elected honorary member of the German Academy for Language and Poetry in the same year . In 2003 Havel received the Hanno R. Ellenbogen Citizenship Award in Prague, the Grand Cross with Necklace of the Czech Order of the White Lion , the German National Prize from the German National Foundation and the Gandhi Peace Prize from the Indian government. 2004 Havel with the highest civilian award of the USA, which was Medal of Freedom (The Presidential Medal of Freedom) , and the Light of Truth Award excellent. In 2005 he received the Austrian Decoration of Honor for Science and Art , in 2006 the Bridge Prize of the City of Regensburg and in 2008 the Point Alpha Prize for his services to German unity (the laudator was previously the former German Foreign Minister Hans-Dietrich Genscher ). In 2009 Havel received the International Democracy Prize of the City of Bonn , the Quadriga Prize , and the Golden Hen , which once again recognized his services to German unity. In 2010 he was awarded the Franz Kafka Literature Prize in Prague and an Order of St. George in 2011 . In 2020 he was posthumously recognized by the Czech state as a resistance fighter against the communist dictatorship.

Havel has been nominated for the Nobel Peace Prize several times, most recently in 2004 . This was not awarded to him.

President of the Czech Republic