The Charter 77 was a civil rights movement in Czechoslovakia from 1977 to 1992, which was the center of opposition to the communist regime. This arose from the Charter 77 petition , which highlighted many grievances in the country. The Charter 77 Foundation has existed since 1978 .

In 1976, artists and intellectuals, as well as workers, priests, ex-communists and former employees of the secret service - among them the playwrights Václav Havel , Jiří Hájek and Jiří Dienstbier (politicians of the Prague Spring ) - and other common Czechoslovaks came together to investigate human rights violations to draw attention to those who contradicted the Helsinki Final Act signed by the Czechoslovak Foreign Minister .

The immediate trigger was the regime's repression against the band Plastic People of the Universe . Founded immediately after the Warsaw Pact invasion, the band had hosted several alternative music festivals since 1968. The group was an important attraction for a state-independent cultural scene and was particularly successful with younger people. At a concert in February 1976, the members of the group were arrested and many of the concertgoers were extensively interrogated. The action sparked national and international protests. Václav Havel himself saw the repression against the Plastic People as an attack by the totalitarian system on life itself, on human freedom and integrity . For Havel it was important to prevent a precedent from being set.

Charter 77 was published on January 1, 1977 and printed on January 7, 1977 in leading European newspapers such as The Times , Le Monde or the Frankfurter Allgemeine Zeitung . The text was not published in the Czechoslovak mass media. In January and February 1977 an intense state campaign against the charter began; its existence was known across the country within a few days.

The declaration, which appeared on January 1, 1977, contained the first 242 signatures, which were collected in December 1976. Their number rose steadily, in 1989 there were finally 1,900 signatories.

The main authors of the declaration and the first spokesmen for the movement were Václav Havel , the philosopher Jan Patočka and the former Foreign Minister Jiří Hájek . As early as January 1977, an international committee to support Charter 77 was founded, including Heinrich Böll , Friedrich Dürrenmatt , Graham Greene and Arthur Miller .

In terms of content, the Charter contrasts the rights granted in the CSCE Declaration and in some cases also in Czechoslovakian laws with reality. She describes the right to freedom of expression as completely illusory , hundreds of thousands of citizens are denied "freedom from fear" (preamble to the First Covenant) , the right to education is denied because hundreds of thousands of young people do not share their views or the views of their parents Studies are admitted, the freedom of belief is systematically restricted by arbitrary arbitrariness in power , overall, the instrument of restriction and often also the complete suppression of a number of civil rights [...] is a system of de facto subordination of all institutions and organizations in the state to the political directives of the apparatus of the ruling party and under the decisions of influential individuals. Insofar as claims are made, these relate solely to the fact that the Czechoslovak government will comply with the treaties it has signed, in particular the Helsinki Final Act.

The rather heterogeneous group included members of the communist party as well as people distant from it , atheists , Christians and members of other religious communities. Other well-known members were the sociologist Rudolf Battěk and the philosopher and mathematician Václav Benda .

The aim of the movement, which was represented externally by three spokespersons elected annually, was the dialogue with representatives from politics and the state. She commented on various social problems ( discrimination at work, freedom of travel, environmental issues , rights of believers, etc.) and repeatedly called for amnesty for political prisoners. She drew attention to human rights violations , documented them and offered solutions. One of the important concerns was also the reproduction of forbidden books or texts ( samizdat ): z. B. Translations by authors such as Orwell , Koestler , works of all emigrated or hushed up Czech and Slovak authors and other people.

The founding document also provides information about the intended movement itself and membership in it: Charter '77 is not an organization, has no statutes, no permanent bodies and no organizational membership. Everyone belongs to her who agrees with her idea, takes part in her work and supports her. Charter '77 is not a basis for oppositional political activity. It wants to serve the common good like many similar citizens' initiatives in different countries in the West and the East.

Other signatories included: Petr Pithart (President of the Czech Senate), Václav Malý ( Auxiliary Bishop in Prague), the sociologist Jiřina Šiklová and the author Josef Hiršal , Zdeněk Mlynář , Secretary of the Central Committee of the KSČ from 1968, and Ludvík Vaculík , Author of the Manifesto of 2000 Words , and the philosopher Milan Machovec , who played an important role in the Prague Spring.

In terms of content, the Chartists wanted to draw particular attention to individual human rights violations , stimulate general mechanisms to protect the rights of individuals on a permanent basis, and act as mediators in specific conflicts. This task was later taken over by the Czechoslovak Helsinki Committee, founded in 1988 .

The charter met with a positive response both in Western Europe (where many of its documents were published) and among dissidents in Poland , Hungary and the GDR .

In 1978, an independent group of signatories began publishing Information on Charter 77 . By 1989 Charter 77 published a total of 572 documents on human rights violations, on the situation of the churches in the Czechoslovakia, on topics such as peace, environmental protection, philosophy and historiography. The charter also made declarations on the often complicated relationship with Germany in Czechoslovakia .

A real organization that developed from the Charter was the Committee for the Defense of the Unjustly Persecuted (Czech: Výbor na obranu nespravedlivě stíhaných - VONS) in 1978.

From the mid-1980s, younger activists in particular broke with the methods of apolitical politics that had been pursued up to then and with the motto "Omnia sponte fluant, absit violentia rebus (everything flows by itself, violence is far removed from things)", which was adopted by Comenius . Encouraged by glasnost and perestroika , among other things, they also sought a physical confrontation with the Czechoslovak state.

Until 1989, the charter played a key role in informing the West , but also the Czechoslovaks themselves, about the actual situation in the country and creating a space for free discussion. It is also thanks to their commitment and reputation that the Velvet Revolution of 1989 took place peacefully, and many of its protagonists subsequently reached high political levels in the state.

Reactions of the regime

Although the charter did not define itself as an opposition and did not call for dialogue, the Czechoslovak state reacted with harshness and repression . The state's first reaction came on January 12, 1977 in the newspaper Rudé právo . Under the heading Shipwrecked and Self-Elected , the signatories were referred to as the deranged existences of the Czechoslovak reactionary bourgeoisie and those of the organizers of the counterrevolution of 1968 , who acted on behalf of anti-communist and Zionist headquarters of certain Western agencies . The document itself is an anti-state, anti-socialist, anti-popular, demagogic inflammatory pamphlet which grossly and mendaciously slanders the Czechoslovak Socialist Republic and the revolutionary achievements of the people. An intensive campaign in all media followed in January and February, in which numerous regime-compliant artists and intellectuals vehemently distanced themselves from the charter. The singer Karel Gott, for example, claimed: “There are times and situations when it is not enough just to sing. That is why my voice joins the great stream of artists who profess socialism and peace: for an even more beautiful song and an even more beautiful melody, for an even happier and more joyful life for the people of this country ”.

Signatories have been repeatedly arrested, interrogated, apparently observed, banned from their profession, or isolated from society. Václav Havel spent several months in custody . One of the three first speakers, Jan Patočka , collapsed on March 13, 1977 after hours of interrogation by the police and died. At his funeral, every mourner was photographed and filmed while a helicopter was constantly circling over the cemetery. The first official trial finally took place in October 1977. The defendants were charged with smuggling illegal literature in Czechoslovakia abroad. The maximum sentence was 3½ years imprisonment.

Several hundred of the Charter's signatories have been expatriated . The writer Pavel Kohout was refused entry into Czechoslovakia after a trip in 1979 and his citizenship was revoked. Others left their homes for fear of repression. A total of around 300 signatories emigrated, mainly to Austria , where they were granted political asylum without any problems . From there most of them emigrated to the USA , Canada and Australia .

In 1977 the Communist Party initiated a counter-action, the so-called Anticharta , which quickly grew to a little more than 2000 artists, v. a. Actors, etc. joined. On January 28, 1977, the first signing of the Anticharta by many prominent artists was broadcast live on television. On the other hand, actors who did not sign the Anticharta were banned from practicing their profession for years. 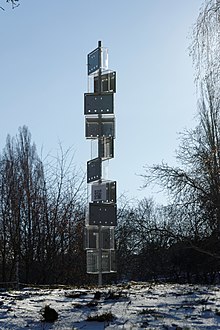 Monument to the signatories of Charter 77 in Prague Dejvice

In contrast to the Prague Spring, the charter is largely undisputed in the Czech Republic and Slovakia . The Charter is generally viewed positively today. This goes so far that Václav Havel said as early as 2002 on the occasion of the anniversary celebrations: As a Chartist, the tabloidization of this topic bothers me. The charter is made almost a sacred cause. Whereas those who have been forced by the harsh modern history to sign a document against the charter suddenly find themselves in the dock today after 25 years. I don't like it at all. I think that both the Charter and the Anticharta are part of our recent history and should be dealt with calmly and objectively. In other words, they shouldn't be an occasion for any separation, but rather an impulse to study together.

1978 was foundation of Charter 77 ( Charta 77 Foundation ) by members of the Swedish magazine Folket i image and Jiri Pallas, a co-signatory of the Charter 77 in Stockholm founded. It was financed by the Monismanien Prize money that the movement had received shortly before. The foundation was supposed to support the Charter 77 movement and persecuted oppositionists in Czechoslovakia.

In November 1989 it moved to Prague and was registered there as the new organization Nadáce Charty 77 ( Charter 77 Foundation ). She opened offices in Brno and Bratislava. In 1992 an independent Slovak foundation was established.

Both foundations support various projects to strengthen democratic civil society in their countries. The Czech Foundation has been involved in awarding the Václav Havel Human Rights Prize together with the Council of Europe and the Czech Ministry of Foreign Affairs since 2012 .

The foundation has been awarding the František Kriegel Prize since 1987 .

This version was added to the list of articles worth reading on September 11, 2005 .