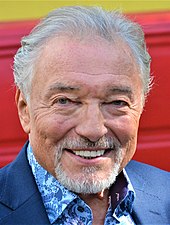 Karel Gott was the only child of Karel Gott (1911–1982) and Marie Valešová (1910–1977). At the age of six he moved from Pilsen to Prague with his parents . There he attended high school and played with friends in dance cafés. He actually wanted to become a painter , but saw no chance of passing the entrance examination to the Prague Art Academy , and initially trained as a high-voltage electrician at ČKD .

In 1958 his career began with performances in Prague dance cafes. The following year he was noticed by the Czechoslovak bandleader Karel Krautgartner at a young talent competition , who took him on tour and recommended him to the Prague Conservatory , where he studied singing for three years. He made his first recordings in English in 1960. In 1963 he released his first single , a Czech version of Henry Mancini's Moon River . In 1967 he took part in the Midem -Festival in Cannes and completed a six-month stint in Las Vegas .

At the Grand Prix Eurovision 1968 he represented Austria with the song Thousand Windows, written by Udo Jürgens . He came in 13th. The following year he was seen in the movie Charley's Uncle in a guest appearance with two hits. In the period after the end of the Prague Spring he briefly considered emigrating for a longer stay in western countries , but eventually returned to Czechoslovakia . In 1975 Germany's first Karel Gott fan club was founded in Wuppertal .

One of his most famous songs is the theme song Maya the Bee from the Japanese cartoon series Maya the Bee . Karel Svoboda composed most of his hits . His popular hits in Germany include the titles Do you know where , Schicksalsmelodie , Once around the whole world , Babička , No more Bolero , The Girl from Athens , Every Night or Catch the Light (in a duet with Darinka ). Lyricists of his around 900 songs sung in German include Michael Kunze , Bernd Augener , Filip Albrecht , Kurt Feltz and Fred Weyrich .

Karel Gott has been referred to as “The Golden Voice from Prague”, “ Sinatra of the East”, “Golden Nightingale” or “Messenger of Good News”. He has appeared on numerous TV shows. In addition to his own show, he also appeared in the Gilbert Bécaud Show, at the Nashville Country Music Festival , at the Europarty , in the Rudi Carrell Show , the James Last Show or at Ein Kessel Buntes . His discography includes around 120 albums, which are joined by numerous compilations. There is no official information about the number of albums sold. It is estimated that more than 30 million records have been sold. In the Czech Republic and Slovakia alone, his albums sold a total of around 15 million times, for which he was the only interpreter to receive a diamond record from the most important Czech publisher Supraphon .

Karel Gott was honored with more than 50 diamond, platinum, gold and silver plates as the most successful artist by Supraphon, Melodija , Polydor , Philips , PolyGram , Universal and other publishers. He was chosen 42 times as the favorite singer of the year at the Czech audience award “ Golden Nightingale ”. He has worked with music publishers from Europe, the United States and Japan . He published his recordings not only in many European countries from Portugal to Russia , but also in the United States, Canada and Japan. Although he also sang songs in French , Italian , Russian , Hebrew , Spanish , Romani , Polish , Hungarian , Serbo-Croatian and other languages, his albums in Czech and German were the most successful.

The Gottland Museum opened in 2006 in the villa in Jevany east of Prague, which Karel Gott lived in from 1969 to 2005 , and was temporarily closed at the end of February 2009 due to financial problems. In 2008 Karel Gott recorded the song Forever Young with the rapper Bushido , which reached number 5 in the German single charts and was awarded two gold records . In 2010 he played himself in a guest appearance in Bushido's autobiographical film Times Change You .

In the Czech Republic , he was sometimes accused of his undisturbed relationship with the former communist regime in Czechoslovakia. He was one of the co-signers of the “ Anticharta ” initiated by the Communist Party and thus one of the artists who spoke out publicly against the democratic ideas of Charter 77 . 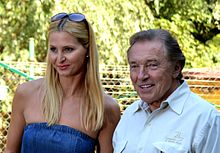 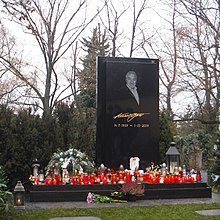 Karel Gott was married to Ivana Macháčková (* 1976). The wedding took place in January 2008 in Las Vegas . With her he has two daughters, who were born in 2006 ( Charlotte Ella Gottová ) and 2008. Two other daughters (* 1973 and * 1987) come from two earlier, illegitimate relationships. He lived with his family in a villa on a hill in the Smíchov district of Prague . In November 2015, it was announced that he had cancer ( non-Hodgkin lymphoma ). After several months of treatment, according to the doctors, he was cured since July 2016. In September 2019, he announced that he had been diagnosed with acute leukemia . Karel Gott died on October 1, 2019 at the age of 80 in his Prague home with his family. On October 12, 2019, the Czech Republic said goodbye to Karel Gott with a day of national mourning in Prague's St. Vitus Cathedral . The mass was celebrated by the Archbishop of Prague Dominik Duka . In December 2019 he was buried in the Malvazinky cemetery ( Czech Hřbitov Malvazinky ) in the Smíchov district.

Austria at the Eurovision Song Contest