He spent his school days in Bad Goisern and Gmunden . At the age of 19 he went to Graz to study. A little later his musical career began. When rock music conquered the world in the 60s, he founded his first band, The Provos, at the age of 14. In 1970 Wilfried moved to Graz and started his musical career from there. First he played as bassist with Moses, he sang on "Sad Song / Mexican Dessert", the last single of the Graz hard rock group Hide & Seek. This was followed by a short guest appearance with the French rock group Escape. In 1972 he qualified for the "Show Chance 1972" through the preliminary decision in Bruck an der Mur. There he sang his song Come Brother, which was released in 2008 on his CD "letters Blues. In 1973 he published Ziwui Ziwui, a rocking reinterpretation of Innsbruck Vogelfänger song. By this title, as well as, among others, its hard rock version of Kufstein song , he considered an early pioneer the new folk music , however. His musical work includes numerous other genres, from blues to rock to idiosyncratic pop songs such as Orange and Highdelbeeren . His greatest successes, including running hare, run counts, he celebrated in the 1970s and 1980s which made him one of the most famous representatives of the Austro-pop , of whom he said:

“This term is really just some sort of drawer. The difference between me and Ambros , between Hubert and Danzer is as big as between Lauffen and Kentucky . "

In 1974 he was with the Crazy Baby Band, which was named after his first record Crazy Baby. During this tour Wilfried got big problems with his voice, which put him out of action for a while. From 1978 to mid-1979 Wilfried was the singer of the First General Insecurity (EAV). He can be heard on the debut album 1. Allgemeine Verunsicherung and was on tour with the band. Since the EAV did not have its own record deal at the time, the album was released through his record deal with EMI . Conversely, some of his songs were written by Thomas Spitzer from the EAV. He achieved a top position in the charts in the mid-1980s with his song Südwind . He celebrated one of his greatest commercial successes in 1987 with the album and single Ikarus , which was listed in the Austrian charts for three months, with number 6 as the highest position. Wilfried did not have a number one hit, but did have numerous top positions in the Austrian charts. He was one of the most versatile musicians, playing between styles. Big hits were Mary, Oh Mary (1973) at number 3, Ziwui, Ziwui (1974) at number 6 and Let me be with you (1984) at number 12.

In 1988 he represented Austria with Lisa Mona Lisa at the Grand Prix d'Eurovision de la Chanson ; with 0 points he finished last of all 21 participants. Wilfried stated that the political situation (the Waldheim affair of 1987 was still fresh in my mind) had influenced the performance of the Austrian delegation in Dublin ("spit on" behind the stage, "evade" others when "the Austrians" came). According to Wilfried's assessment, the musical act was de facto evaluated politically and not musically, which was not meant to be apologetic, as it stood by his experience. In addition, he worked repeatedly as an actor in theater and film. In the early 1990s, he played the role of Walter Lehner in the television series Die people von St. Benedikt and was a speaker in commercials (e.g. 1987 “The Difference is Köck”).

In 1991 Felix Dvorak brought him to his Berndorf Festival, where, alongside Hans Holt and Daniela Markus, he was successful in the title role of Molnár's Liliom . There followed many appearances as an actor under the direction of Elfriede Ott at the Maria Enzersdorfer Festival.

In 1996 he founded the a cappella group 4Xang . In the early summer of 2000, he and 4Xang started the jubilation, bustle, hoarseness tour on the occasion of his 50th birthday. The premiere was traditionally in the K. u. K. Hofbeisl in Bad Ischl , because it was there that he made his first musical steps as an artist. In 2010, after 14 years and around 1,500 appearances throughout the German-speaking area, the 4Xang group disbanded. The last concert of the jubilation, hustle and bustle, hoarseness tour was given on the occasion of his 60th birthday on June 26, 2010 in the Pressbaumer Center .

Wilfried now called himself Wilfried Scheutz and performed as a duo with either Orges Toce (guitar) and Heinz Jiras (keyboard) with the programs Will Blues or letters Blues on. 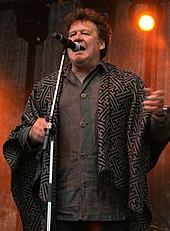 In 2008, he published his first book , letter blues , in which he summarizes short stories, poems and wisdom, which are accompanied by a photo-life story.

In 2009 he founded the jazz formation “Fathers'n'Sons” with Hanibal Scheutz (double bass), Gerd Schuller (keyboard) and Gerald Schuller (drums) and opened the restaurant “Vereinsmeierei” with his wife.

At the beginning of 2011 he put together a new rock band with his son Hanibal Scheutz, the “New Band”, which also includes Orges Toçe (guitar), Heinz Jiras (keyboard), Carlos Barreto-Nespoli (bass) and Christian Eberle (drums). The band plays hits by Wilfried Scheutz that have been rearranged by Hanibal Scheutz and interpreted by the new band. The first appearance took place at the Graz city festival in June 2011.

In 2011 he continued his acting career; in The Watzmann calls! he took on the role of Ambros as the narrator.

At the end of November 2012 his comeback album Tralalala was released , which was recorded with the formation "New Band". At the same time, the compilation Best of 1974-1992 appeared on the same label .

In August 2016 he played the main character 'Chuck' in Petrol Station of the Damned by Georg Ringsgwandl in the version by Thomas Maurer in the Stadtsaal in Vienna. In June 2017 a new studio album was released with the title Gut Lack . At the same time it was also announced that he had written the lyrics for the musical Liebe Hoch 16 .

He was posthumously honored for his life's work at the 2018 Amadeus Awards .

Wilfried had been married to Marina Tatic since 1982, their son Jovan Hanibal was born in 1981. He plays the double bass at 5 / 8erl in Ehr'n . Wilfried last lived with his family in Pressbaum ( Lower Austria ).

His wife was hired as a singer and costume tailor for the EAV in 1977 . Among other things, she took part in the show Uschi im Glück and the album 1. Allgemeine Verunsicherung . 1979 both left the band.

Austria at the Eurovision Song Contest