A cappella [a kaˈpɛla] (abbreviation ac ; spelling at least historically: a capella ; from Italian: 'a' - German 'like (in a)' and 'cappella' - 'chapel') means: 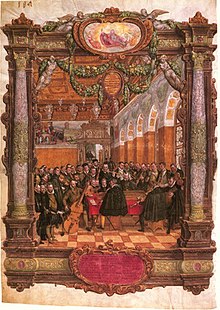 The term "a cappella" is based on the Italian alla cappella and originally means music "in the style of the chapel " (church choir). Initially, it was understood to mean polyphonic vocal music in which the choir is accompanied by musical instruments and the instruments play exactly what the voices sing ( colla parte ).

"A capella (Ital.) Means: when vocal and instrumental voices can be heard with each other at the same time, in such a way that they execute what they have."

That means a performance practice of vocal music that could be presented variably. Whenever possible, the Kapellmeister used existing instruments for the performance. The instruments could double or replace the voices. A cappella music found its way into cantatas in the 17th century .

The performance practice of the Sistine Chapel was already a special case in the 18th century:

"However, the Papal Music is different from others in that you don't need an organ or other instruments, you just sing the pieces."

Significance in the 19th century

The rediscovery of old choral music by amateur choirs in the 19th century led to a misunderstanding of the term a cappella , which resulted in a change in meaning: In common parlance, it was now understood as music that completely dispensed with instruments and was based solely on the human voice although the term doesn't say so.

Significance in the 20th century

In the broad mass of traditional choirs, the understanding of a cappella as unaccompanied music has largely consolidated. Due to the greater weighting of knowledge about historical performance practice in music studies, at least the professional musicians are aware of the original meaning. Choirs and church choirs , now consider a historical performance practice, draw on their performances of ancient choral music in Cappellstil again increasingly instruments added.

The Chordettes , one of the first a cappella girl groups

At the beginning of the 20th century, a new genre of small vocal groups emerged in the USA, such as The Whiffenpoofs in 1909. The songs were sung in barbershop style in Close Harmony . In 1927, based on the American model of The Revelers , the Comedian Harmonists were created in Germany . Although they sang with piano accompaniment, their popularity made the purely vocal genre very popular. A cappella music took further influences from the Doo Wop of the 1950s. One of the first girl groups to sing a cappella was the quartet The Chordettes , whose best-known hit was Mister Sandman [Bring me a Dream] from 1954.

A cappella music is performed nowadays mainly by modern vocal ensembles of four to six people. In addition to many purely male and mixed ensembles, there are only a few purely female bands , for example Aquabella , medlz or Niniwe . As song material, special cover versions of songs from the pop and rock sectors are used, which are arranged without instruments. On the other hand, specially written and arranged songs are used.

In the arrangements, the individual voices in melody and text can stand side by side on an equal footing. Often, however, one or more voices take over the main voice in the sense of a solo voice or a lead voice , while the other voices provide the accompaniment. The individual voices, often amplified by electronic aids and studio technology, imitate individual instruments - especially the drums through vocal percussion or beatboxing , and occasionally by clapping hands or snapping fingers. A cappella groups also occasionally use eggshakers for rhythmic accompaniment. Because of these different tasks, a cappella groups have the classic division into melody and rhythm groups .

The international festival for vocal music "a cappella" has been held annually in Leipzig since 1997 , and since 2007 it has also promoted young ensembles as part of a competition. Other important competitions for a cappella ensembles in the German-speaking area include the International A Cappella Competition in Graz, the A Cappella Award in Ulm and the youth culture award .