Alfried Krupp (right) with his son Arndt (left) and Sylvanus Olympio , President of Togo, in the Villa Hügel 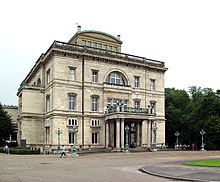 The Villa Hügel , the house where he was born

Childhood and youth, entry into the company

Alfried Krupp von Bohlen und Halbach was born as the eldest son of his parents Gustav and Bertha Krupp von Bohlen and Halbach at the ancestral home of the Krupp family, the Villa Hügel , where he grew up with his seven siblings. He attended the Realgymnasium in Essen-Bredeney , today's Goetheschule , studied engineering in Munich , Berlin and Aachen from 1928 to 1934 and graduated from the TH Aachen with the academic degree of Diplomingenieur. He then did a traineeship at Dresdner Bank in Berlin. In 1935 he joined the family company, Friedrich Krupp AG. He initially worked in the Group's head office in Essen. In 1936 he became an authorized signatory . In October of the same year he moved to the department for armaments production and artillery construction as an assistant . In 1938 he became head of the raw materials and armaments departments. On March 22, 1941, Krupp von Bohlen and Halbach became a member of the board of directors with an annual salary of 60,000 Reichsmarks .

On May 16, 1940, Krupp von Bohlen und Halbach met with Ruhr industrialists from Essen at the invitation of the Henkel operator in Düsseldorf to negotiate the future of confiscated factories at the beginning of the French campaign.

In March 1943, Krupp von Bohlen und Halbach became chairman of the board of directors of Friedrich Krupp AG, succeeding his father Gustav. At this point in time, his mother Bertha owned almost all of the Krupp AG shares. His parents moved Hitler to the so-called Lex Krupp on November 12, 1943. According to this, Krupp AG was to be converted into a sole proprietorship, whose sole owner was to become a family member, which at the same time, analogous to the imperial decree, was given the name Krupp and its family name. The purpose of Lex Krupp was also to save the company from paying inheritance tax. Von Bohlen und Halbach was therefore only allowed to put the name “Krupp” in front of his birth name after being authorized by Hitler. The correction in the Essen-Bredeney registry office was made on June 17, 1944.

On December 15, 1943, Krupp von Bohlen und Halbach became the sole owner of the Krupp company. At that time, the company was a major industrial company and one of the important armaments suppliers of the National Socialist German Reich . During the Second World War , Krupp, like all other large German companies, employed slave labor . Due to the constant fluctuation, a total number cannot be determined; the highest number of prisoners of war and foreign civil or forced labor on a reference date was around 25,000 on January 1, 1943. In the early summer of 1944, after there were no longer any prisoners of war or foreign civilian workers available, Friedrich Krupp AG requested that 2,000 male concentration camp prisoners be assigned to work. This was complied with in June, but instead the company was promised Jewish women who had previously been deported , mostly from Hungary , to the Auschwitz-Birkenau concentration camp . A Krupp delegation from personnel administration and operations management then selected 500 around twenty-year-olds. In addition, 20 so-called prison functionaries were selected . These women were taken to the Humboldtstrasse subcamp of the Buchenwald concentration camp in Essen-Fulerum in August (officially: SS-Arbeitsommando Fried. Krupp, Essen ). The workers were deployed in various Krupp factories. The detonator factory near Auschwitz , mentioned occasionally, was planned by the Krupp company and two million Reichsmarks had already been approved for construction, but from 1943 the company Weichsel-Metall-Union Sils and Co. was producing there. Instead, detonator production was carried out in Wüstegiersdorf in what was then Silesia with 250 women prisoners from the Auschwitz concentration camp after being relocated from Essen. In December 1944, the Krupp company employed 224 prisoners of war, 1,029 foreign forced laborers, and 200 Hungarian and Croatian female concentration camp prisoners here.

Krupp von Bohlen und Halbach had been a sponsoring member of the SS since 1931 . He was a member of the National Socialist Aviation Corps , in which he last held the rank of Standartenführer . In 1937, like his father, he was appointed military manager. In addition, he was his father's deputy in his function as chairman of the board of trustees for the Adolf Hitler donation to German business . From 1938 he was a member of the NSDAP , and he was also a member of the Armaments Council at the Reich Minister for Armaments and War Production. After the start of the war he was responsible for the dismantling of factories in the areas occupied by the Wehrmacht and their rebuilding in the German Reich. Krupp von Bohlen und Halbach was awarded the War Merit Cross, 2nd and 1st class.

On April 11, 1945, Alfried Krupp von Bohlen und Halbach was arrested by American troops in Villa Hügel and his entire property was confiscated. After the Allies initially intended to indict his father as part of the first Nuremberg trial against the main war criminals, who had to be released because of illness and weakness, the Americans Krupp von Bohlen and Halbach filed a separate suit in 1947 together with eleven senior employees of the Krupp company Procedure (case X: Krupp trial ).

In 1948 he was sentenced to twelve years' imprisonment and confiscation of all his property for slave labor (use of forced labor) and looting of economic goods in occupied countries. In the indictment he was also accused of planning a war of aggression and the associated conspiracy . He was acquitted of this guilt, however, because in the period before the Second World War his father, and not he, directed the fortunes of the company. In an interview with the London Daily Mail in 1959, when asked if he had “any sense of guilt”, he replied, “What guilt? For what happened under Hitler? No. However, it is regrettable that the German people allowed themselves to be so betrayed by Hitler. "

On the basis of an opinion by independent American experts, Krupp von Bohlen and Halbach was pardoned by decision of the American High Commissioner for Germany John Jay McCloy on January 31, 1951 and released early from the Landsberg war crimes prison .

In 1953 the so-called Mehlemer Treaty was concluded between Krupp von Bohlen and Halbach and the governments of the USA , Great Britain and France . Through this contract, all of his property was returned to him under certain conditions. One of the main conditions was the stipulation that the mining and smelting operations would be separated from the Krupp Group and sold by 1959.

In March 1953 Krupp von Bohlen und Halbach took over management of the company again. At the end of the same year he brought Berthold Beitz to the group as a general representative. He converted the company completely to civilian production, mainly to plant engineering. Krupp AG quickly regained its position as a leading steel producer. In fact, the mining and smelting operations were subsequently separated - as provided for in the Mehlem contract - but ultimately not sold. Rather, they were combined in 1960 and merged with the Bochumer Verein für Gussstahlfabrikation AG.

Grave slab in the Bredeney cemetery

Establishment of the foundation and death

Krupp von Bohlen and Halbach suffered from lung cancer. Shortly before his death, he ordered the establishment of an Alfried Krupp von Bohlen und Halbach Foundation , which should be an expression of the tradition of the Krupp family , which is committed to the common good . With his death, all of his assets passed to the foundation. This was made possible by his son Arndt von Bohlen and Halbach's renunciation of inheritance .

Alfried Krupp von Bohlen und Halbach was the last person with this surname. According to Wilhelm II's decree, as well as Adolf Hitler's Lex Krupp, the addition of “Krupp” to the surname was only to be used by people who also owned the Krupp company. With the transfer of the company to a foundation, this statutory order became irrelevant.

18,000 people passed his coffin; At the funeral, the then Federal President Heinrich Lübke spoke .

In 1937 Krupp von Bohlen and Halbach married Anneliese Lampert, b. Bahr (1909-1998). With her he had the son Arndt von Bohlen and Halbach . The marriage was divorced in 1941 at the urging of the father Gustav and especially the mother Bertha, who did not consider this relationship befitting: Gustav Krupp wanted to change the succession , which was based on the general regulations of the grandfather Alfred. Then it would not have been Alfried but one of the younger brothers who would have become the heir of Krupps. Alfried bowed to the pressure and agreed to the divorce. This turned out to be disadvantageous for the relationship between Alfried Krupp von Bohlen und Halbachs and his son: Arndt was distanced from the Krupp von Bohlen and Halbach family by his mother, who had been expelled from the Villa Hügel in Essen and was disappointed. Arndt was later found by his father and others to be unsuitable for managing the Krupp company. This was partly attributed to the influence of the mother, who was disappointed by the Krupps.

In 1952, Krupp von Bohlen and Halbach married Vera Knauer geb. Hossenfeld (divorced from Langen, Wisbar and Knauer, 1909–1967). The marriage was divorced again in 1957.

A long family tradition of the Krupps was membership in the north German home association Men vom Morgenstern . This concern was very important to the father Gustav because the Bohlen family came from the Elbe-Weser triangle . After their father's death, Alfried and his brother Berthold also became supporting members.

Krupp von Bohlen und Halbach was an avid sailor. In the sailing competitions of the Olympic Games in 1936 before Kiel he won with the crew of his 8mR racing yacht III Germania for Germany the bronze medal. Later he had the yachts Germania V (1956), which he gave to the German High Seas Sports Association HANSA , and Germania VI (1963) built, with which he also actively sailed.

Alfried Krupp Hospital in Essen- Rüttenscheid , the new building was built on the initiative of the Alfried Krupp von Bohlen und Halbach Foundation

The foundation began its activities on January 1, 1968, uses the income it receives from its stake in the company exclusively and directly for charitable purposes and is now the largest single shareholder in ThyssenKrupp AG .

After his death, Krupp von Bohlen and Halbach's record collection went to the Folkwang University in Essen . Even before his death (1966) he had donated part of the Villa Hügel library to the Ruhr-Universität Bochum .

In 1961 Krupp von Bohlen und Halbach received the ring of honor from the city of Essen , after the city of Essen had distanced itself from his parents Gustav and Bertha Krupp 15 years earlier and had revoked their honorary citizenship. Well, on the 150th anniversary of the Krupp company, Alfried received an award. Former Federal President Theodor Heuss held the anniversary speech . Regarding Krupp's perception in the post-war period , he said: “I want to express this very drastically: the idea that the power of attorney and the design office at (the armaments companies) Schneider-Creusot , at Škoda […] and so on were entrusted to heavenly angels while the corresponding buildings at Krupp are a branch of the devilish hell. The manufacture of weapons through the millennia of human history [...] is a very simple historical fact that one can certainly regret. But you don't get rid of him with that. "

In 1969, Krupp von Bohlen and Halbach served as a template for the character of Friedrich Bruckmann in Luchino Visconti's film Die Verdammten (The Damned). The character is played by Dirk Bogarde . The script was nominated for an Oscar in 1970.