The institution extends over six hectares and is designed for 565 inmates as well as for a further 109 inmates in the open prison in the Rothenfeld branch in the community of Andechs and 58 in two outdoor houses in Landsberg am Lech. The JVA Garmisch-Partenkirchen is managed and supplied together with the JVA Landsberg.

The Institute in 1908 by spinning off of parts of the prison Ebrach as National Institute prisoners Landsberg a. Lech was built according to plans by Hugo Höfl in cautiously classifying Art Nouveau. The building complex, which was built by the Royal State Building Administration in accordance with the “modern guidelines for the penal system” , includes a number of other prison buildings and official apartments.

After the First World War , a fortress and protective custody department was set up. The first prisoner in prison was Anton Graf von Arco auf Valley , who shot the Bavarian Prime Minister Kurt Eisner in February 1919 ; In 1923/1924 Adolf Hitler served 264 days of imprisonment here.

because of participation in the Hitler-Ludendorff Putsch :

During the Nazi era, the following people, among others, were imprisoned in Landsberg:

Numerous foreign political prisoners were also deported to Germany and imprisoned in Landsberg. Between the beginning of 1944 and the end of the war, at least 210 people were killed here as a result of mistreatment or executions.

Was Criminals Prison No. 1 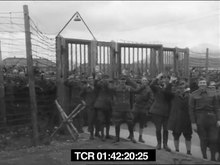 Play media file
US soldiers liberating the Landsberg am Lech prison on April 30, 1945

There were numerous requests for clemency from the German side for those sentenced to death. In November 1950, all parties from the city and district of Landsberg asked for mercy in a resolution, as did a delegation from the German Bundestag in January 1951.

It says on the website of the city of Landsberg:

“On January 7, 1951, the members of the Bundestag Dr. Richard Jäger [sic] (CSU) and Dr. Seelos (BP) and members of the state parliament from both parties at a rally on Landsberger Hauptplatz. Several thousand people attended this demonstration. The rally ended in scandal when Jewish DPs from the Lechfeld camp held a counter-demonstration to commemorate the victims. Despite all the sympathy of the population for the perpetrators, there were no efforts to protect the victims of National Socialism. "

At the "scandal" the excited crowd roared, according to research by the historian Jens-Christian Wagner: "Jews out!"

On January 31, 1951, the US High Commissioner responsible for those convicted of the Nuremberg Trials , John McCloy , and the Commander in Chief of the US Armed Forces in Europe , General Handy , who was responsible for those convicted in the Dachau Trials , announced their decisions: seven of a total of 28 death sentences that have not yet been carried out have been confirmed - 21 death sentences and numerous other sentences were reduced in terms of sentences in the course of these reviews. A number of prominent prisoners - for example Alfried Krupp von Bohlen and Halbach and Wilhelm Speidel - were released on mercy as early as 1951.

The seven confirmed death sentences - carried out on June 7, 1951 - concerned

Some of the executed were buried in the "Spöttinger Friedhof" (prison cemetery), others were transferred to their hometowns. Through the publication of the Landsberg Citizens' Association in the 20th century and the critical local historian Anton Posset on war criminals in special issue 1 "From Hitler's fortress detention to war criminal prison N ° 1: The Landsberg detention center as reflected in history", the prison's cemetery also moved up the ua the war criminals hanged in prison and Jewish victims of the Nazi regime were buried. For many years it was used as a pilgrimage site by right-wing extremists. In countless newspaper articles and letters to the editor, the citizens' association sparked a discussion about how to deal with this “pilgrimage site”, which could have been closed 50 years later. Instead, the graves were maintained by the state. In 2002 Lutz Hachmeister made a documentary film about this emotionally much discussed topic and the historical significance of the prison. In 2003 the cemetery was deedicated by the Free State of Bavaria and the nameplates were removed from the graves amid strong protests.

Other sentences served here under US administration include:

Furthermore, in 1947 the 21 people convicted of war crimes trials in Shanghai were housed here.

The WCP No. 1 was dissolved on May 9, 1958. The institution was returned to the Bavarian judiciary.

The facility has been operated as a correctional facility since 1959 . Prominent or well-known prisoners since then have been:

In January 2011, volunteers and helpers, including the former prison chaplain, were excluded from the Landsberg JVA Christmas party, contrary to longstanding custom. The incident was criticized by those affected such as the local Caritas .

In February 2011 there were two suicides by prisoners in Landsberg JVA within just three days . The relatives thereupon raised serious allegations against the prison management and criticized the detention conditions in Landsberg. In particular, the accusation was loud that the incident was not nearly as surprising as the prison director Monika Groß had claimed in the press.