This article is about a person who often appears as "Heinrich Lammers" in the literature on Nazi war crimes. For a table tennis athlete of a later generation see Heinrich Lammers 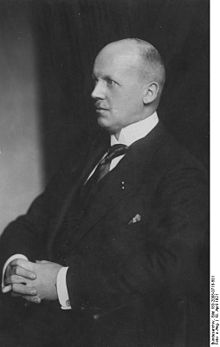 Hans Heinrich Lammers (born May 27, 1879 in Lublinitz ; † January 4, 1962 in Düsseldorf ) was a German judge , administrative lawyer and ministerial official . In the time of National Socialism he was head of the Reich Chancellery . In the Wilhelmstrasse Trial in 1949 he was sentenced to 20 years in prison for war crimes and crimes against humanity .

Lammers, son of a veterinarian, attended the Protestant Princely School in Pless . After graduating from high school , he studied law at the Silesian Friedrich-Wilhelms-Universität Breslau and the Ruprecht-Karls-Universität Heidelberg . In Breslau he became a member of the Miltenberg Association Wratislavia Breslau. He passed his legal traineeship exam in 1901 and served as a one-year volunteer in the Prussian Army (1906 lieutenant d. R.). In 1904 he was promoted to Dr. iur. PhD . After the great state examination (1907) he entered the Prussian administration of justice . Initially a court assessor in Breslau, in 1912 he became a district judge in Beuthen , Upper Silesia . On April 29, 1913, he married Elfriede Tepel (1894–1945) in Gleiwitz , who gave birth to two daughters in 1914 and 1918.

In 1914 Lammers volunteered for the 4th Lower Silesian Infantry Regiment No. 51 in Wroclaw. He lost his left eye due to an injury in 1917. Therefore, transferred from the fighting troops to Upper East , he was most recently head of the finance department.

Appointed to the Reich Ministry of the Interior , Department I, at the end of 1920 , he became a senior government advisor in 1921 and a ministerial advisor and head of the constitutional department in the constitutional department in 1922 . He owed Theodor Lewald for his unusually rapid rise in the authority . In the constitutional law department he represented the Reich in trials against the states . His rejection of the Weimar Republic displeased social democratic MPs. Carl Severing reprimanded him in 1928 because he saw in a newspaper article by Lammers an "intentional degradation of the Reich constitution". The fact that Severing's predecessor, the German nationalist Walter von Keudell , had also passed over Lammers for promotions, is assumed to be the reason for joining the National Socialist German Workers' Party in February 1932. As a staunch monarchist and national-conservative civil servant, he had previously been a member of the German National People's Party , the Stahlhelm, Bund der Frontsoldaten and the Berlin National Club from 1919 . 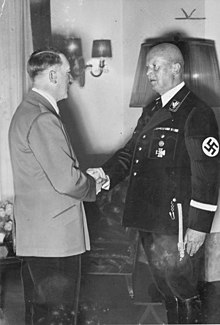 On the day of Potsdam , the new Chancellor Adolf Hitler appointed Lammers State Secretary and Head of the Reich Chancellery. At this interface between Hitler and the Reich administrative authorities, he organized (with Martin Bormann , Otto Meissner and, from 1938, Wilhelm Keitel ) the business of government. Since there were hardly any cabinet meetings after 1933, he also transmitted Hitler's wishes and orders to the Reich ministries. It was Lammers who translated Hitler's often spontaneous intentions and plans into legally compatible legal texts, thereby ensuring their execution and implementation. Conversely, Lammers was also the decisive entry barrier to Hitler for all things not relevant to the party. Among other things, he helped his half-Jewish former sponsor Theodor Lewald , who had meanwhile become President of the Organizing Committee of the Olympic Games in 1936 , to audiences with Hitler quickly and easily and helped to secure extremely generous funding for the Games. Lammers filtered the information and concerns that were brought to Hitler from the administration. Given Hitler's well-known aversion to office work and studying files, it was Lammers who compiled all of the things that were government-relevant from his point of view and then discussed them with Hitler in an oral lecture. Lammers also took over the administration of Hitler's personal assets instead of a salary (sale of stamps with his image, Adolf Hitler donation to the German economy, etc.), most of which were held by the Delbrück bank .

In February 1932 he became a member of the NSDAP, his party membership was registered with effect from March 1, 1932 under the number 1.010.355. His first political appearance for the NSDAP took place on September 24, 1932, when he gave a speech to the main speaker Goebbels at an event for officials in the Prussian state parliament.

On November 26, 1937, Hitler appointed him Reichsminister without portfolio with the official title Reichsminister and Head of the Reich Chancellery . In this function he was responsible for the endowments granted by Hitler .

On September 29, 1933, Lammers had joined the SS (SS No. 118.404) and had received the rank of SS Oberführer . This was followed by promotions to SS-Brigadführer (April 20, 1935), SS-Gruppenführer (January 30, 1938) and SS-Obergruppenführer (April 20, 1940). In 1933 he was one of the founding members of the National Socialist Academy for German Law and from the end of 1933 was leader of the Reich Association of German Administrative Academies .

From November 30, 1939, he was a managing member of the Ministerial Council for Reich Defense, which was chaired by Hermann Göring . Lammers was involved in the T4 campaign . This "euthanasia" camouflage organization was based in Berlin at Tiergartenstrasse 4 .

From 1937 Lammers had the Palais Von-der-Heydt-Straße 18 as his residence (today: headquarters of the Prussian Cultural Heritage Foundation ). As early as 1934, with Hitler's permission, he was allowed to use the hunting lodge of the Reich President on Werbellinsee (former imperial hunting lodge, demolished in GDR times and rebuilt as the Hubertusstock hunting lodge ). In 1944 Hitler gave him the hunting lodge with a donation of 600,000 Reichsmarks for his services.

Leader of the student corporation associations

Lammers, a member of the black student union Wratislavia Breslau , was the leader of the Miltenberger Ring (MR). On September 21, 1933 he ordered the conversion of the MR-connections into corps , the introduction of the determination censorship and the accession to the National Socialist community of corps student associations ; this disintegrated in February 1934. In January 1935 he took over the leadership of the Association of Student Associations (GStV), which had the goal of “maintaining and strengthening” the corporate student body and at the same time committed itself to “constant internal educational work more and more in the National Socialist state to grow into ". In March 1935, the GStV was recognized by the NSDAP and the National Socialist German Student Union as the overall representative of the student associations. However, after Hitler internally expressed his general aversion to student connections in July 1935 and after there had been disagreements with several associations, Lammers resigned from the GStV in September 1935. This dissolved a few days later. 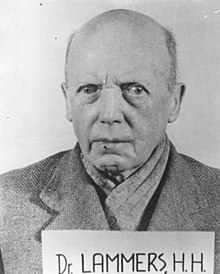 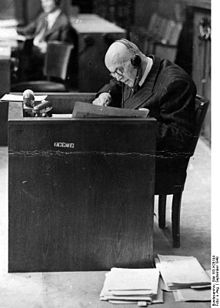 Shortly before the end of World War II , Lammers was arrested in April 1945 for supporting the attempt to replace Hitler with Göring. Before the execution by the SS ordered by Hitler, he was captured by American troops . Until August 1945 he was interned with other Nazi figures and high military personnel in the Luxembourg Bad Mondorf in Camp Ashcan .

On April 8 and 9, 1946, Lammers appeared as a witness in the Nuremberg trial of the major war criminals . In the Wilhelmstrasse Trial against employees of various ministries of the German Reich from 1933 to 1945 , he was sentenced to 20 years imprisonment by the IV Allied Military Tribunal on April 11, 1949 for war crimes and crimes against humanity , including participating in the murder of European Jews . On January 31, 1951, this sentence was reduced to 10 years by the American High Commissioner John Jay McCloy ; on December 16, 1951 he was pardoned and released from prison in Landsberg am Lech .