This article deals with the Nazi politician. For his son, the theologian, see Martin Bormann junior . 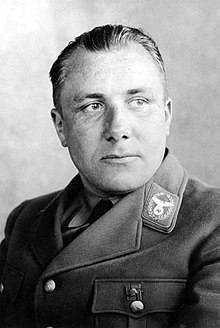 Martin Bormann (born June 17, 1900 in Halberstadt ; † May 2, 1945 in Berlin ) was a German functionary of the NSDAP . In the time of National Socialism he held the highest party offices, most recently head of the party chancellery of the NSDAP with the rank of Reich Minister and an important confidante of Adolf Hitler . After his escape from the Führerbunker under the garden of the old Reich Chancellery at the beginning of May 1945, he was considered missing . He was indicted in absentia in the Nuremberg trial of the major war criminals , convicted on October 1, 1946, on two of three counts, and sentenced to death by hanging.

For decades there was a rumor that Bormann had managed to escape abroad. According to the Reich Youth Leader Artur Axmann and his adjutant Günter Weltzin , Bormann and Ludwig Stumpfegger killed themselves near the Lehrter train station on Invalidenstrasse . Both bodies were discovered and identified during construction work in Berlin in 1972, including using dental methods . In 1998 the identity of Bormann was confirmed beyond doubt by means of a DNA analysis .

Martin Bormann's parents were Theodor and Antonie Bormann. Theodor Bormann (1862–1903) was a post office worker. After his first wife Louise Grobler, who left him two children, died in 1898 at the age of 30, Theodor Bormann married Antonie Bernhardine Mennong, the then 35-year-old daughter of a work colleague, that same year. Of the three sons born in quick succession, only Martin (1900–1945) and Albert Bormann (1902–1989) reached adulthood, while the brother, born in 1901, died as an infant. In 1903 Martin Bormann's father died shortly after he turned 41.

Martin Bormann married Gerda Buch , the eldest daughter of the party judge, Major a. D. Walter book . Adolf Hitler and Rudolf Hess acted as witnesses . Gerda Bormann gave birth to ten children between 1930 and 1943, one of whom (Ehrengard's daughter) died shortly after birth. She also had at least one miscarriage . The first child was named in honor of the "Führer" Adolf Martin .

In June 1918 Martin Bormann was drafted into the 2nd Thuringian Field Artillery Regiment No. 55 in Naumburg without taking part in combat operations in the First World War. After the war, he completed an agricultural apprenticeship on an estate and became a member of the Association against the Overconfidence of Judaism . The landowner there housed members of the Roßbach Freikorps , which Bormann joined. As a member of the Freikorps he was involved in right-wing extremist activities and was charged with femicide in 1924 . Together with the later SS Obersturmbannführer and commander of the Auschwitz concentration camp, Rudolf Höß , who received a ten-year prison sentence , he had to answer for the Parchim Fememord of the elementary school teacher Walter Kadow (1900-1923). Bormann was sentenced to one year in prison . Höss was released early in 1928 due to an amnesty.

During the trial, Bormann complained about the fact that he was listed as a Protestant Christian on the court files. According to him, he believed "in nothing" at the time. In 1928 he became a member of the NSDAP. There he was briefly the driver of Gauleiter Fritz Sauckel in Weimar and rose to the leadership of the NSDAP just a year later. In 1928 he took over the SA insurance and later expanded it to become the NSDAP's auxiliary fund .

Reichsleiter and Chief of Staff of Rudolf Hess

Bormann (front, first from right) at the 10th  Party Rally of the NSDAP, Nuremberg 1938

In October 1933, in his capacity as Chief of Staff of the Deputy Leader , Bormann was appointed to one of the 18 Reichsleiter of the NSDAP and held the office until his boss Rudolf Hess's "England flight" in 1941, where he gradually became irreplaceable wanted to make. In November he became a member of the Reichstag .

So Adolf Hitler appointed Bormann as the administrator of his property. B. with royalties for Hitler's book Mein Kampf and for its illustration on postage stamps. In addition, Hitler had personal access to the “ Adolf Hitler Endowment Fund for German Business ” set up by Bormann and others .

Furthermore, Hitler entrusted him with the construction and supervision of a “ Führer's restricted area ” on Obersalzberg , which, in addition to other private homes of Nazi political celebrities, also included Hitler's Berghof and the Kehlsteinhaus . He threatened the former property owners with transferring them to a concentration camp if they were not ready to sell.

On May 12, 1941, Bormann took over the office of his boss, who was in English captivity, with the powers of a Reich Minister, after which it was renamed the Party Chancellery. Bormann was now unofficially the second most powerful man in the empire, and there was hardly a way around him.

The longer the war lasted, the more Bormann was able to influence who was given access to Hitler and when to present his concerns, and which mail reached the Führer when, where, or whether at all. On April 12, 1943, he was officially given the title of "Secretary of the Führer".

Due to the constant closeness to Hitler and his increasing focus on warfare, Bormann gained a position of power that also set barriers to influential Nazi figures such as Hermann Göring , Heinrich Himmler and Albert Speer . In his will, Hitler described Bormann as the "most loyal of his party comrades". Bormann was Hitler's best man at his wedding to Eva Braun in the Führerbunker on April 29, 1945, which took place shortly before their simultaneous suicides.

Staying in the Führerbunker almost to the end, Bormann, who was equally unpopular in party circles and in the military, stayed with his Führer, who named him "Party Minister " in Goebbels' cabinet in his political will .

Bormann's role in the persecution and extermination of the Jews

Bormann was an essential driving force in every phase of the persecution and extermination of the Jews . He intervened both in anti-Jewish legislation and in its administrative implementation.

On October 9, 1942, he issued a decree to the party that ordered the final elimination of Jews from the German Reich beyond their expulsion through the use of "ruthless hardship" in special camps in the occupied east. In particular because of his dual function in state and party, he extended the persecution to ever more extensive areas of life.

Nuremberg trial and circumstances of death

Bormann was still present when Hitler's body was cremated. On the morning of May 1, he had informed Karl Dönitz , whom Hitler had designated in his will as his successor as Reich President and Commander-in-Chief of the Wehrmacht, in a radio telegram that he would come to see him in Northern Germany as soon as possible. After that, the trail of Bormann was lost and he could no longer be found. Bormann was indicted in absentia at the Nuremberg Trials and sentenced to death on October 1, 1946 . At the time of the trial, it was by no means certain that Bormann was already dead, although the former Reich Youth Leader Artur Axmann , who was summoned as a witness before the International Military Tribunal, testified that he had seen Bormann's body in Berlin.

According to Axmann, on May 1, 1945, after Hitler's death, Bormann and Ludwig Stumpfegger, together with other inmates of the Führerbunker, attempted a breakthrough out of the hotly contested city center of Berlin. At times they marched along in a group of tanks on foot and also survived the explosion of a nearby tank. Bormann and Stumpfegger then apparently committed suicide on the night of May 2, 1945, probably between 1:00 and 3:00 a.m., using poison capsules they had carried with them. On their escape route, Axmann and his adjutant Günter Weltzin discovered the two bodies lying next to each other in the early morning hours of May 2, 1945 on the Invalidenstrasse bridge over the long-distance tracks at Lehrter Bahnhof . Axmann identified the two dead. They are said to have still worn uniforms, but without a badge of rank.

Although Bormann's body was not found, the Berchtesgaden District Court officially declared him dead on March 10, 1954. Since the mid-1960s, the Frankfurt am Main public prosecutor's office had excavations on an area in question near the Lehrter train station in Berlin based on contemporary witness reports which, however, remained without result. In 1968, the Spiegel reported on an interview with the alleged Bormann supporter Erich Karl Wiedwald . The former SS squad leader claimed to a correspondent for the London Sunday Times that he had piloted Bormann from Berlin and had seen him a few months earlier. According to Wiedwald, the Nazi giant lived in the so-called "Kolonie Waldner 555" in the Brazilian-Paraguayan border area. Bormann's face was disfigured by a failed facial operation in 1947, so that his distinctive scar on the forehead is hidden under the "welts of inflamed skin". Other rumors pointed to a flight to Argentina. Bormann's alleged hiding place in the jungle near the town of San Ignacio can still be visited today.

During underground cable work by the Post on 7./8. December 1972 were near the Lehrter station near the former National Exhibition Park discovered two skeletons in the ground caused by the statements of the then (1945) undertaker and the subsequent investigations by coroners , dentists (through forensic odontology ) and anthropologists quickly Martin Bormann and Ludwig Stumpfegger could be assigned. Splinters of glass from hydrocyanic acid vials were found between the teeth of both skulls . The identity of Bormann's skeleton was proven in 1998 by a DNA analysis . Bormann's remains were burned in 1999; its ashes were scattered over the Baltic Sea.

“'Martin Bormann died on the night of May 2, 1945 between one and three o'clock on the railway bridge on Invalidenstrasse in Berlin.' With this declaration, the Hessian Attorney General Dr. At a press conference in Frankfurt am Main on April 11, 1973, Horst Gauf announced the result of twelve years of investigations by the authority he headed into the fate of the former Nazi Reichsleiter who was wanted for murder in millions of people. The investigation file 'Bormann', AZ: O JS 11/61, is closed. "

Bormann was considered to be an “absolutely reliable vicarious agent” of Hitler. He was underestimated by his contemporaries, but after the war he was “overdrawn and overrated as an evil demon of the Nazi state and scapegoat”.