The Kroll Opera House in Berlin , the seat of the Reichstag from 1933

The German Reichstag was a sham parliament from 1933 to 1945 during the National Socialist dictatorship . After the last Reichstag election , in which more than one party participated, the new Reichstag under Adolf Hitler passed the Enabling Act on March 23, 1933 . In doing so, he effectively ceded his legislative powers to the Reich government ( Hitler's cabinet ). From July of the same year, the NSDAP formed the only parliamentary group. The President of the Reichstag was Hermann Göring . With the annexation of Austria , the pseudo parliament in Berlin was renamed the Greater German Reichstag in 1938 . In the absence of essential parliamentary competencies and because of the regular singing of the national anthem , it was sometimes mockingly called the “most expensive choral society in Germany”. 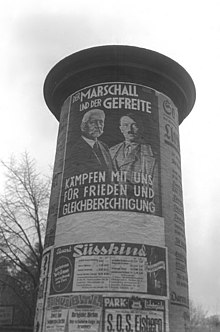 Election poster with Reich President Hindenburg and Reich Chancellor Hitler for the election in November 1933 :
The Marshal and the Corporal fight with us for peace and equality

After the election on March 29, 1936, a new count of the legislative periods was decreed. The third electoral term began. The 8th electoral period (March to November 1933) and the IX. Election periods (November 1933 to March 1936) were subsequently reinterpreted in the 1st and 2nd electoral periods in order to make the "caesura with Hitler's rise to power clear."

See also : Suffrage in the time of National Socialism

Significance of the election results

The results of the Reichstag elections and referendums, in which the NSDAP always received overwhelming approval, cannot be regarded as an authentic expression of popular opinion.

In the elections from November 1933, only the NSDAP stood for election. All other parties had been banned in the previous legislative period until July 1933 or had decided to dissolve themselves. In each of the three elections, a unified list was drawn up (cf. Reich election proposal ), on which a number of non - party members , referred to as guests , stood for candidates. As with the referendums , there was only the possibility of approval or rejection.

Elections were always scheduled after the regime's foreign policy successes (occupation of the Rhineland, annexation of Austria), i.e. in situations in which Hitler's popularity reached its peak. Many critics and opponents of the regime also voted for the NSDAP's list out of justified fear of breaching voting secrecy. In some places the elections were used to systematically identify the names of the no voters. Occasionally, voters who voted “no” were beaten up afterwards. Even the prisoners of the Dachau concentration camp voted 99.5% for the official list in November 1933.

MPs and number of seats

According to the regulations of the Weimar Election Act, one seat was granted for every 60,000 votes cast . Since the turnout was very high, but also because of the new territories that had come to the Reich, Parliament assumed significantly larger proportions than at the beginning of 1933. At last there were 876 members; Adolf Hitler himself was there No. 433, elected in Reichstag constituency 24 ( Upper Bavaria - Swabia ).

After the partly free election in March 1933, 3.8% women from various parties, but not the NSDAP, entered parliament. In the three following elections there were no female candidates and therefore no more female MPs (see also Women during the National Socialist era ). The same was true for Jewish candidates of both sexes. Jews also lost de jure as a result of the Reich Citizenship Act (1935) the active and passive right to vote , as they were no longer considered "Reich Citizens". 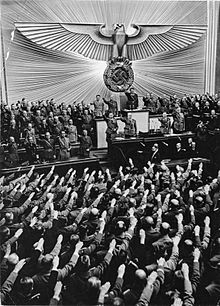 As a result of the arson attack in February 1933 , the Reichstag building was unusable. That is why the performance hall in the Kroll Opera House opposite was converted into a conference hall. After the move, the Reichstag sessions took place there.

According to the Enabling Act, the Reichstag met nineteen times. Only seven laws were passed at these meetings - compared to 986 laws that were passed by the government alone based on the powers of the Enabling Act. Two of these concerned the extension of the four-year authorization law. The remaining five were:

The Reichstag met for the last time on April 26, 1942. The unanimous decision taken at this meeting abolished the last remnants of the civil servants' prerogatives and also made the “ Führer ” the final decision-making body.

Wikisource: Law on the extension of the electoral term of the Greater German Reichstag  - sources and full texts

Reichstag elections in the time of National Socialism

Members of the Reichstag in the era of National Socialism