The Reichstag of the Weimar Republic (1919-1933) was after the Weimar Constitution of 1919, the Parliament and one of the supreme bodies of the German Reich . The Reichstag met for the first time on June 24, 1920. He took over from the Weimar National Assembly , which had served as parliament from February 1919 to May 1920. The Reichstag met in the Berlin Reichstag building and was elected using proportional representation. One party received one seat for every 60,000 votes. 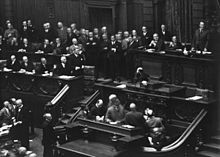 According to the Weimar Constitution of 1919, the Reichstag was elected every four years in a general, equal, secret and direct election based on proportional representation. The Reichstag decided the imperial laws and was responsible for the decision on the budget , deciding on war and peace as well as confirmation of individual treaties . He was also responsible for overseeing the Reich government : he could force individual ministers or the entire government to resign with a vote of no confidence , and he could also repeal emergency decrees of the Reich President under Article 48 of the Weimar Constitution at any time. The Reich President could dissolve the Reichstag under Article 25 of the Constitution, but only once for the same reason.

The combination of these two constitutional articles made the so-called presidential cabinets possible from 1930 , when the Reich President and the Reich Government largely dealt with legislation instead of the Reichstag. This was reinforced by the electoral successes of the anti-republican parties NSDAP and KPD , which together had the arithmetical majority in the Reichstag since the Reichstag election of July 31, 1932 . In 1933, the National Socialists used these constitutional articles as well as the opportunity to transfer legislation from the Reichstag to the government through an enabling law to establish their dictatorship (see seizure of power ). With the ban on left-wing parties and the forced self-dissolution of the center and right-wing parties in the spring of 1933, the Reichstag became a one-party pseudo-parliament dominated by the NSDAP. Its last meeting took place on April 26, 1942.

Announcement of the rules of procedure for the Reichstag ( Reichsgesetzblatt 1931 Part II, p. 221)

The rights, duties and responsibilities of the Reichstag were as follows:

With the term Reichstag also is Parliament building by Paul Wallot in Berlin called, inaugurated 1894th However, it was only able to perform this function for 39 years, until the Reichstag fire on February 27, 1933. Who was the author of the arson could never be completely clarified and is still controversial today. The beneficiaries of the fire were the National Socialists, who on the following day abolished basic rights by means of an emergency ordinance issued by the Reich President . From then on, Parliament met in the Kroll Opera House .

The Reichstag building was also partially destroyed in the hail of bombs during World War II. After several phases of reconstruction in the post-war period, it was not fundamentally rebuilt until the 1990s and crowned with a new dome. Since 1999 it has been the seat of the German Bundestag .

→ Main article : Suffrage and the electoral system of the Weimar Republic

1924 election campaign : distribution of leaflets from trucks at the Brandenburg Gate

A few additional rules were added to this basic scheme. The most important was that a party could only get seats if it had received at least 30,000 votes in at least one constituency. Furthermore, an imperial list was only allowed to provide as many seats as the party had already received overall at the lower levels. These provisions put disadvantaged small parties without a regional focus.

The distribution of the remaining votes resulted in not insignificant differences between the proportion of votes and mandate, so it is not purely proportional representation. Strictly speaking (as in many electoral systems) the equality of the success value of the vote was not guaranteed .

The active and passive right to vote for women in Germany, as in most other countries, was only introduced with the democratic reorientation after the First World War . Germany, like Austria, belonged to the European avant-garde of women's suffrage after a number of Scandinavian and Baltic states . On February 19, 1919, Marie Juchacz (SPD) gave the first speech by a female MP in a German national parliament.

At the beginning of the Weimar Republic, the National Assembly and the First Reichstag still had a female membership of eight to nine percent, but in the following six electoral periods it leveled off at around six to seven percent. After the Reichstag election in March 1933 , which followed the National Socialists' seizure of power , the proportion of women fell to just under four percent. After the other elections during the Nazi era ( November 1933 , 1936 and 1938 ) no more women entered the Reichstag .

Gender distribution figures from the beginning of the parliamentary term. Members of the National Assembly and the Reichstag of the Weimar Republic.

President of the Reichstag and Council of Elders

Presidents of the German Reichstag were:

The President and his deputies were elected by the MPs at the beginning of the legislative period. In accordance with parliamentary practice in Germany, a representative of the strongest parliamentary group was usually elected as president.

The presidium was supported by the council of elders . The previous senior citizens' convention was renamed the Council of Elders in the course of the new rules of procedure of the Reichstag from 1922. The body now consisted of the President of the Reichstag, the Deputy President and a total of twenty-one members appointed by the parliamentary groups. As a rule, these included the chairmen of the political groups. The council of elders was chaired and convened by the president or his deputy. The body was responsible in particular for agreeing the political groups on agendas and work plans. However, these agreements were not legally binding. Deviations were basically possible for the parliamentary groups. The council of elders also determined the chairmen of the committees and their deputies and some other organizational matters. Despite the limited competencies, the council of elders was of considerable importance for the functioning of parliament. In essence, the tasks were comparable to those of the Council of Elders in the German Bundestag .

Since December 3, 1930, longer parts of Reichstag sessions have been recorded by radio . Although Reichstag President Paul Löbe advocated live broadcasts, the Reichstag's Council of Elders initially refused. An approximately 80-minute speech by Chancellor Heinrich Brüning on February 25, 1932 is the first full length Reichstag speech subsequently broadcast on the radio. The first live broadcast of a session of the Reichstag took place on March 23, 1933 on the occasion of the passage of the Enabling Act . In total, more than 20 hours of original sound recordings from Reichstag sessions have survived during the Weimar Republic. The originals of the sound recordings that have been preserved are now in the British Library Sound Archive ; copies are available at the German Broadcasting Archive in Frankfurt . In March 2018, the SWR2 archive radio broadcast for the first time the complete recording of almost all the sessions received up to Hitler's rise to power, most of which had previously remained unpublished.

Constitutional organs of the Weimar Republic

President of the Reichstag of the Weimar Republic

Member of the Reichstag in the Weimar Republic