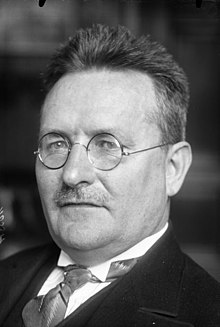 The Paul-Löbe-Haus as seen from the Federal Chancellery

Löbe was the first of four children of the carpenter Heinrich Löbe (1843–1898) and his wife Pauline geb. Leuschner (1852–1947) to the world. As a boy he already contributed to the family's upkeep as an errand boy delivering newspapers and rolls. Between 1882 and 1890 he attended the evangelical elementary school Dornbusch in Liegnitz and then completed an apprenticeship as a typesetter from 1890 to 1895 in the Krumbhaar printing works, which among other things printed the Liegnitzer Anzeiger . As such, he worked in a printing works in Breslau until December 1898 . In between he traveled to southern Germany, Austria-Hungary, Italy and Switzerland. Between November 1891 and April 1892 he published the first article under the pseudonym Alu Pöbel in the social democratic Breslauer Volkswacht , was editor from 1899 and from 1903 to 1919 editor-in-chief of the paper. Because he, as a social democratic editor, took up social grievances and occasionally blamed the authorities for them, he was sentenced several times to imprisonment or fines for “ insulting majesty ” or “inciting class hatred” and other reasons.

Löbe got engaged to Clara Schaller (1879–1964) from Liegnitz between two prison sentences lasting several months and married her in 1901. The marriage resulted in a son. At the First World War Lobe did not participate because he was not drafted because of a lung disease.

On behalf of the SPD, he spoke out in favor of a settlement with Poland . In 1927 he therefore traveled to Warsaw and Lodz for talks with Polish politicians . He told them that the two countries should no longer “fight politically” but “work together economically”. In doing so, he suggested negotiations on controversial border issues, in return the German Reich could offer trade agreements. In Lodz, where Löbe was invited to an anniversary celebration of the local Social Democrats, Polish nationalists demonstrated against the visit. His interlocutors from the Warsaw leadership did not respond to his suggestions either. After the trip he complained about the lack of willingness to compromise on the Polish side.

At the time of the Weimar Republic, Löbe belonged to the Reichsbanner Schwarz-Rot-Gold . On April 26, 1933, Löbe was elected to the party executive committee of the SPD. In the course of Adolf Hitler's so-called peace speech of May 17, 1933, he agreed to the "peace resolution" also submitted by Hitler. On June 19, 1933, it was decided, with Löbe's leading participation, to separate from the SPD's executive committee in exile in Prague; Löbe hoped that this would compromise the Hitler government. Likewise, no more Jewish comrades were elected to the new party executive committee. The National Socialists imprisoned Paul Löbe on June 23, 1933. Until the beginning of July 1933 he was in the Berlin prisons on Alexanderplatz and in Spandau, then in the Breslau-Dürrgoy concentration camp until mid-August , then in the Berlin-Alexanderplatz prison until the end of December. After his release he worked for the scientific publisher Walter de Gruyter . Löbe later received a pension of 600 RM on Hitler's instructions, which was paid out on time until 1945. Although he had contacts with the Goerdeler district , he was only arrested again on August 23 after the assassination attempt on July 20, 1944 , as part of the Gewitter campaign . In the Beck / Goerdeler shadow cabinet , Löbe was scheduled to serve as President of the Reichstag in the event of a successful coup, but the Gestapo officials who questioned were not aware of this. After a short imprisonment in Wroclaw, Löbe was imprisoned in the Groß-Rosen concentration camp and released in the spring of 1945.

He experienced the end of the Second World War in the county of Glatz in Lower Silesia , from where the German inhabitants were expelled after the end of the fighting . In the summer of 1945 Löbe had to leave Silesia. He went to Berlin, lived in the American sector and was involved in the SPD. Löbe remained in the SPD until the end of his life and stood up especially for the concerns of the displaced persons .

In 1945 he became editor of the daily newspaper Das Volk , and later license holder of the telegraph in the British sector of Berlin . From 1949 to 1951 Löbe was the founding president of the German Council of the European Movement . In 1954 he became chairman of the Trustees of Indivisible Germany and remained so until his death. He received a grave of honor from the city of Berlin at the Zehlendorf forest cemetery . The grave is located in Section III U-24.

Löbe had been a member of the SPD since 1895. In 1898 he founded the SPD local association in Ilmenau . In 1899 he became chairman of the SPD in Central Silesia . As early as 1919/1920 he tried to come to an understanding with the moderate wing of the USPD , which rejoined the SPD in 1922. After Friedrich Ebert's death in 1925, the Reich Executive Committee of the SPD proposed him as a candidate for the presidency. Löbe refused, however, because he saw his place in parliament. In 1932/1933 he was also editor of Vorwärts . In 1933 he was chairman of an elected "Directory" of the domestic SPD for a few days until the party was banned on June 22, 1933. Löbe was arrested and sent to the Breslau-Dürrgoy concentration camp . There he was badly mistreated by SA men .

After the Second World War, Löbe played a key role in the reconstruction of the SPD and became a member of the party's central committee in Berlin . He strictly rejected the compulsory union with the KPD to form the SED in the Soviet occupation zone. He therefore left the central committee of the (East) Berlin SPD and became involved in the SPD of the western sectors , which remained independent. In 1947 he was appointed chairman of the SPD's foreign policy committee.

In his office as President of the Reichstag, Löbe found himself increasingly confronted with tumult and disturbances in the Reichstag sessions, especially from October 1930 (5th electoral period), which mostly originated from the factions of the NSDAP and KPD . Löbe met this challenge with a mixture of patience and rigor with regard to regulatory measures against individual MPs.

With the advancement of radio technology, the question arose more and more of the extent to which Reichstag sessions should be broadcast on the radio . In his radio address of October 12, 1930, Löbe advocated a delayed "occasional transmission of particularly important meetings", at which all parliamentary group speakers should appear for about the same length of time. However, the majority of the Reichstag's Council of Elders spoke out against it.

Löbe was a member of the Parliamentary Council in 1948/1949, albeit as a West Berlin deputy who was not entitled to vote, and was deputy chairman of the SPD parliamentary group there. From 1949 bis 1953 Lobe was finally a member of the German Bundestag , where he could be as non selected from Berlin originating deputy because of the Allied reservations by the people but by the House of Representatives of West Berlin delegated as a non-voting delegate to Bonn was. He was the oldest member of parliament and thus the age president of the first German Bundestag; in second place was Konrad Adenauer , who was three weeks younger than him and survived by three and a half months. In his opening speech, Löbe appealed to his compatriots to work for a unified “liberal Germany” that “wants to be the link in a united Europe”.

Löbe was awarded the Grand Cross of the Order of Merit of the Federal Republic of Germany in 1951 . On December 14, 1955, he received honorary citizenship of the city of Berlin . He was an honorary member of the Free University of Berlin . He was also the bearer of the plaque of honor of the Association of Expellees . In 1960 the Berlin Senate awarded him the Ernst Reuter plaque . On June 9, 1961 in Hanover he was the first to be honored with the Silesian Shield of the Silesian Landsmannschaft .

After Löbe's death, a state ceremony was held in his honor on August 9, 1967 in Schöneberg Town Hall . The coffin was covered with the flag of the Federal Republic of Germany and laid out in the vestibule of the town hall, where the mourners had also gathered. In addition to the family, they also included the representatives of the Federal President, Federal Council President Helmut Lemke . In their speeches, Bundestag President Eugen Gerstenmaier , Federal Chancellor Kiesinger , Governing Mayor Heinrich Albertz and SPD Chairman Willy Brandt praised the work of Paul Löbe. At the same time, Commune I political activists were holding a satirical funeral on John F. Kennedy Square.

After the reunification of Germany and the election of Berlin as the capital, buildings for the Bundestag and its work were also rebuilt along with the government district. Important places were named after Paul Löbe. Directly north of the Bundestag on the other side of Paul-Löbe-Allee is the most important functional building for Parliament, the Paul-Löbe-Haus . The house contains 1700 rooms. These include 275 parliamentary offices, rooms for committees of inquiry and their secretariats and assembly rooms. There is a Paul Löbe School , an integrated secondary school in Berlin-Reinickendorf . In many cities and towns streets are named after Paul Löbe (see Paul Löbe as the namesake of streets ).

President of the Reichstag of the Weimar Republic

Age President of the German Bundestag

President of the European Movement Germany