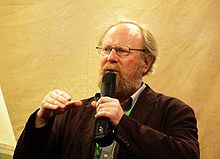 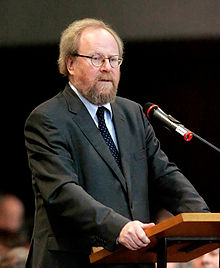 Wolfgang Thierse was born on October 22, 1943 as the son of a lawyer and a member of the Catholic Center Party (later CDU district member) in Breslau. His grandfather Paul Thierse was a doctor of high school in Breslau, later a senior magistrate and also a member of the Center Party. After being expelled from Breslau, Wolfgang Thierse's family settled in the Thuringian Eisfeld , where Thierse attended high school. He was also a member of the FDJ . After high school at the Extended Secondary School in South Thuringia Hildburghausen he trained as a typesetter at the Thuringian Tageblatt in Weimar .

In 1964, Thierse began studying German and cultural studies at the Humboldt University in Berlin , which he completed in 1969 with a diploma. He then worked as a research assistant to Wolfgang Heise in the Cultural Studies / Aesthetics section of the Humboldt University . The GDR Ministry of Culture , where he worked in the visual arts department from 1975, fired him after he refused to sign a declaration in favor of Wolf Biermann's expatriation .

In 1977 he went to the Central Institute for the History of Literature at the Academy of Sciences in the GDR as a research assistant . There, among other things, he was in charge of the historical dictionary of basic aesthetic terms , which appeared from 2000. Between 1970 and 1987 worked Thierse to the scripts for seven DEFA - documentaries with and comment texts written. In 2003 he presented an audio book with one of the most famous stories by Charles Dickens , A Christmas Story .

Thierse was non-party until the fall of the Wall and the peaceful revolution, and in October 1989 he joined the New Forum , one of the citizens' movements on the Alliance 90 list . At the beginning of January 1990 he became a member of the Social Democratic Party of the GDR (SDP). After Ibrahim Böhme resigned , Thierse was elected chairman of the GDR SPD at a special party conference on June 9, 1990.

Thierse is the spokesman for the “Christians in the SPD” working group . From 1991 to 2013 he was chairman of the SPD's Fundamental Values ​​Commission and is currently an advisory member there.

From March to October 1990 Thierse was a member of the GDR's first freely elected People's Chamber . Here he was initially deputy chairman and from August 21, 1990 chairman of the SPD parliamentary group .

On October 26, 1998 Thierse was elected President of the German Bundestag with 512: 109: 45 votes and confirmed in office on October 17, 2002 with 357: 219: 20 votes. Thierse received only 59.9 percent of the vote because he was accused from the camp of the Union parties of having conducted his office too partisanly in the last legislative period.

In his first term also fell CDU donations scandal that so far he was concerned, as Parliament President when he qua office was responsible for monitoring compliance with the political parties law and to penalize infringements. He imposed a fine of 7.8 million D-Marks on the CDU and had the state grants to the CDU cut by a total of 41 million D-Marks. He himself said of these events that he would have preferred not to have dealt with them. On the part of the Union, Thierse was attacked several times because of the fines imposed and his non-partisanship was called into question - among other things because Thierse, as President of the Bundestag, continued to serve as deputy SPD party chairman. The Federal Constitutional Court, however, confirmed the legality of this procedure expressly provided for in the Political Parties Act.

In spring 2005 he led a delegation to the mausoleum of the Chinese dictator Mao Zedong .

Thierse has been personally elected member of the Central Committee of German Catholics (ZdK) for many years , honorary president of the European Movement Germany , of which he was president from 1998 to 2000, patron of the Georg Elser Initiative Berlin and a member of the board of trustees of Aktion Deutschland Hilft e. V., the alliance of aid organizations and member of the advisory board of the Cusanuswerk . Since October 2000 Thierse has been chairman of the board of trustees of the Federal Chancellor Willy Brandt Foundation , which was established in 1994 by the German Bundestag. He was also chairman of the board of directors of the Social Democratic Cultural Forum, which focused on artistic and cultural policy issues, cultural policy programs, culture of remembrance , Berlin culture as well as values ​​and religion. He is a member of the board of trustees of the Carlo Schmid Foundation and of the honorary council of AMCHA Germany , the central organization for psychosocial help for survivors of the Holocaust and their descendants in Israel . Until 2013 Thierse took over the patronage of the treatment center for torture victims . He supports the concern to include the German language with constitutional status in the Basic Law .

In 2019 he joined an open letter to Cardinal Reinhard Marx , published by eight personalities - theologians and well-known Catholics - on February 3, 2019 in the Frankfurter Allgemeine Sonntagszeitung . It calls for a "new start with sexual morality" with a "sensible and fair assessment of homosexuality", "real separation of powers" in the church and the removal of the excesses of the ordination office and its opening to women. An appeal was made to the German Bishops' Conference to give diocesan priests the freedom to choose their way of life "so that celibacy can again credibly refer to the kingdom of heaven".

Wolfgang Thierse is married to the art historian Irmtraut Thierse (* 1946). The couple have two children and are Catholic. It lives in the Berlin district of Prenzlauer Berg .

Wolfgang Thierse is intensely committed against right-wing extremism , u. a. as patron of the Amadeu Antonio Foundation . He regularly takes part in relevant demonstrations. He has come under fire because he also participates in blockade actions against illegal and properly registered right-wing extremist demonstrations , for example on May 1, 2010 in Berlin. Criminal proceedings opened against him in this connection, including for coercion , were discontinued.

On February 19, 2011, after an action against the right-wing extremist demonstrations planned on that day in Dresden , Wolfgang Thierse said in an interview with the MDR : “The police are just busy protecting the neo-Nazis. [...] That's Saxon democracy . "Because he so in the opinion of the police union and by politicians of the Saxon government coalition principles of separation of powers and fundamental rights spot, as assembly and demonstration in question and in dealing with political opponents Faustrecht cheap, those comments were criticized. Holger Zastrow , parliamentary group leader of the Saxon FDP, called him "Bundestag vice-president intolerable". Andreas Arnold, a senior police officer, reported Thierse for insulting. At the beginning of March 2011, the preliminary proceedings initiated against him were discontinued.

In two interviews with Berliner Morgenpost and Spiegel at the turn of the year 2012/2013, Thierse complained that the culture in Berlin-Prenzlauer Berg was suffering from the influx of Swabians and other wealthy Germans, insofar as these newcomers did not adapt enough. After 3000 protest mails, some of which were filled with hate, Thierse welcomed the Swabians to Berlin. 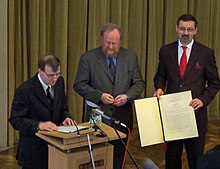 On February 26, 2004, Thierse received an honorary doctorate from the Philosophical Faculty of the Westphalian Wilhelms University of Münster . This award recognizes his special services to the understanding between East and West Germany, the strengthening of democratic awareness in the new federal states and the rejection of radical currents in society.

On November 8, 2005 he received the German Society Award . V. for services to German and European understanding.

Thierse was awarded the Kulturgroschen 2016 by the German Cultural Council , the umbrella organization of federal cultural associations, which was presented to him on March 15, 2016 in Berlin. The President of the German Cultural Council Christian Höppner in his reasoning: As a cultural politician, Wolfgang Thierse has dealt intensively with German history and the role of art and artists in society. As a member of the German Bundestag, he has always stood up for culture and was a moral authority - especially in the form of adequate remembrance of German history. He is one of the most prominent defenders of the cultural institutions and the cultural landscape before dismantling in Germany. He received the Kulturgroschen, the highest award of the German Cultural Council, for this extraordinary life's work in cultural policy.

In 2019, Wolfgang Thierse was awarded the Heckerhut by the SPD district association in Konstanz for his commitment to political discourse in Germany.

Chairwoman of the SPD in the GDR

President of the German Bundestag

President of the European Movement Germany