Hermann Ehlers was born on October 1, 1904, the son of a Prussian postal assistant. His parents, Hermann Heinrich Ludwig Ehlers and Adelheid Louise Auguste Ehlers (née Rabe), had recently moved to Sülze , a small village in the Lüneburg Heath (today a town in the district of Celle belonging to the city ​​of Bergen ), because their father was here had got a job at the railway post office as a postal assistant. His mother came from the Sattelhof in Sülze, which used to be fit for the state assembly . Ehlers grew up in a bourgeois, politically conservative and evangelical environment.

He attended the upper secondary school in Steglitz , which today bears his name as a high school. In September 1922 he passed the school leaving examination there. He was the only one in his class to be exempted from the oral examination due to his outstanding performance. From the age of 15 Ehlers was part of the Christian youth movement (Steglitzer Biblical Circle), with which he later remained closely connected. 1930–1933 Ehlers was a member of the Reich leadership of the Federation of German Biblical Circles .

After graduating from high school, Hermann Ehlers began studying law at the Humboldt University in Berlin . There he joined the Association of German Students in Berlin and Charlottenburg in the winter semester of 1923 , then, at the suggestion of the Grenzlandstiftung of the Kyffhäuser Association , switched to the Friedrich-Wilhelms-Universität in Bonn for a short time , in order to have German presence in the Rhineland occupied by France together with other federal brothers to demonstrate. After the Association of German Students in Bonn was banned by the occupation authorities in June 1924, Hermann Ehlers returned to Berlin. In 1924 he took part in several exercises in the Black Reichswehr and underwent training there.

After the first state examination in law , Ehlers wrote his dissertation again in Bonn, where the VDSt in Bonn was reactivated in 1926 after the French had withdrawn. In 1929 Hermann Ehlers was awarded a doctorate with his work "Essence and Effects of the Reichsland Prussia". jur. PhD. He completed his legal clerkship in Neukölln and Frankfurt (Oder) . 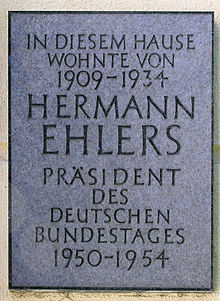 Memorial plaque on the house at Poschingerstraße 6 in Berlin-Steglitz

In 1931 Ehlers passed the great state examination in law and was appointed as a probationary judge (court assessor). In July 1931 Ehlers joined the administrative service of the Evangelical Church of the Old Prussian Union as a legal advisor , where he was active in the “Emergency Community of Inner Mission” and in a church housing association. In 1931/32 he was employed by the Steglitz district administration .

From February 1933 to September 1934 Hermann Ehlers headed the legal advice department of the Steglitz district administration until he was replaced by a member of the NSDAP . From 1933 until it was banned in 1938, he was also the editor of the youth watch , the joint journal of the evangelical youth organizations.

In 1934 he joined the law firm Holstein, who was affiliated with the church, and was mainly concerned with dealing with questions of canon law relating to the Prussian Confessing Church , for which he had been a volunteer since 1933.

In 1936 Ehlers returned to civil service as a judge at the Berlin Regional Court. Because Ehlers refused to join the NSDAP or one of its branches, he did not become a civil servant. His final takeover was rejected in 1939 due to his role in the Confessing Church; since May 1935 he was a legal member of the brother council of the Confessing Church in Prussia.

In 1937 he was arrested by the Gestapo for "inciting disobedience to state orders" and imprisoned from June 17 to July 2, 1937. In the summer of 1939 he was dismissed from civil service. He got a job in a law firm in Berlin.

After the end of the war, Ehlers were offered several positions, such as B. that of the Lord Mayor of Delmenhorst . Because of his unanimous election, however, on October 8, 1945, he accepted the office of the Oberkirchenrat of the Evangelical Lutheran Church in Oldenburg . In this capacity he was one of the German participants in the ecumenical conference in Amsterdam.

Since August 1, 1946, Hermann Ehlers belonged to the newly founded CDU. In 1946 Ehlers and others founded the Evangelical Conference of the CDU , a forerunner of the Evangelical Working Group of the CDU / CSU (EAK). He headed the EAK from its establishment in 1952 until his death.

In the first federal election in 1949 , Ehlers entered the Bundestag via the Lower Saxony state list and in 1953 as a directly elected member of the Delmenhorst-Wesermarsch constituency . On October 19, 1950, the Bundestag elected MP Hermann Ehlers as the successor to the resigned Erich Köhler in the first ballot with 201 of 325 votes cast as President of the German Bundestag . Ehlers then let his church offices rest. As President of the Bundestag, he introduced direct radio broadcasts of important debates and thereby made the work of the Bundestag popular among the population.

At the federal party conference of the CDU in Berlin, Hermann Ehlers was elected 2nd chairman on October 19, 1952. After the CDU's election victory in 1953, Ehlers was confirmed in office with 467 of 487 votes cast; this was the best result in the election of a Bundestag President.

Grave of Hermann Ehlers in Sülze

Completely surprisingly, Hermann Ehlers succumbed on October 29, 1954 - at the age of only 50 - to the consequences of almond suppuration in a hospital in Oldenburg (Oldenburg). His death was described by representatives of all political directions as an irreplaceable loss for the entire German people; his life and work was honored in detail by Federal President Theodor Heuss on the occasion of a state act in the Bundeshaus in Bonn . Chancellor Konrad Adenauer broke off his trip to America and took part in the funeral service in Oldenburg. The funeral took place in the closest family circle in the Heidedorf Sülze near Celle , where Ehlers' parents came from.

For the Lower Saxony state elections in 1955, Ehlers was planned as the top candidate of the electoral alliance of CDU and DP. His sudden death meant that the DP politician Heinrich Hellwege was able to become Prime Minister of Lower Saxony .

Hermann Ehlers had been married to Jutta Else Grete Taubert (1921–2002) since September 12, 1947; the marriage remained childless.

President of the German Bundestag