Hamburg Airport takes up most of the Fuhlsbüttel area 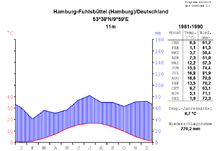 Fuhlsbüttel ( Low German : Fuulsbüddel ) is a district in the Hamburg-Nord district of the Free and Hanseatic City of Hamburg . Fuhlsbüttel was a local authority area until 2008 .

Lies in the local office area

The boundaries of the local office area were in the north the street "Am Ochsenzoll", formerly "Grenzweg" (to Norderstedt ), in the west the Tarpenbek (to Norderstedt) and the airport (to Niendorf and Groß Borstel), in the south Sengelmannstraße (to Alsterdorf and Barmbek), in the east the Ohlsdorf cemetery (to Bramfeld) and the Raakmoorgraben (to Hummelsbüttel ).

Parts of the former local authority area, z. B. Langenhorn, have been owned by Hamburg for over 800 years. In the past they belonged to the rulership of the Geestlands. Until 1975, the local office area also had its own Hamburg-Fuhlsbüttel registry office, which was later merged with the Hamburg-Nord registry office.

Fuhlsbüttel is determined by the course of the Alster , whose valley lies in the east on the border with Ohlsdorf . The surrounding green belt is an important recreational area today. Part of the mill pond , a smaller reservoir of the river, belongs to the Fuhlsbüttels area. The actual center of Fuhlsbüttel has formed not far from it around the street Erdkampsweg.

The village was first mentioned in a document under the name Fulesbotle in 1283 and, in terms of settlement history, belongs to the Büttel localities, which refers to the Saxon designation of a "safe place". The prefix ful- means “dirty” or “swampy” and refers to the location on the then still unregulated course of the Alster , through which the area was often flooded. So a settlement on swampy terrain is named.

The document from 1283 mentions the sale of the Fulesbotle goods, including the village and a mill, by Count Gerhard to the Reinfeld monastery . Just one year later, the village and mill became the property of the sons of the tenant Johann vom Berge. Around 1420 the property came into Hamburg possession and from then on belonged to the land lordship of Hamm and Horn ; the mill was at this time Ratsmühle . During the siege of Hamburg (1641–1643) and the siege of Hamburg (1679) , the army camps of the Danish kings Christian IV and Christian V were located in Fuhlsbüttel .

In 1913 Fuhlsbüttel became part of Hamburg.

The Fuhlsbüttler population is composed as follows (data from the North Statistics Office, as of December 2018):

The average income per taxpayer in Fuhlsbüttel in 2013 was around 39,526 euros, which was almost exactly the Hamburg average (39,054 euros).

For the election to Hamburg citizenship , Fuhlsbüttel belongs to the constituency of Fuhlsbüttel-Alsterdorf-Langenhorn . The 2020 citizenship election led to the following result:

For the Protestant Church of St. Marien , Charles Crodel created 12 small windows according to his own proposal from 1959–1960.

St. Lukas , built in the neo-Gothic style in 1893 ( Julius Faulwasser ), was given its present-day appearance in 1937–38 based on plans by Bernhard Hopp and Rudolf Jäger . The original sacristy was converted into a memorial chapel in 1963 by the church's architect to commemorate the fallen sons of parishioners. Since January 2002 there has also been a memorial wall for the civilian victims of National Socialism in Fuhlsbüttel. Rectangular relief tiles were made for this by students from the Alstertal high school.

The prison Fuhlsbüttel ( Santa Fu ) that the district but today Ohlsdorf is located, was home during the National Socialism a satellite camp of the Neuengamme concentration camp and the infamous concentration camp Fuhlsbüttel for political and racial persecution ( Kola Fu ). At least 500 people were tortured to death here. A memorial in the gate building on Suhrenkamp, ​​built in 1896, has been a reminder of the horrors of the past since 1987. The permanent exhibition, which was renewed in 2003, exemplifies the various groups of victims and the history of Kola-Fu.

The Hamburg Information Center for Nazi Forced Labor on Wilhelm-Raabe-Weg is located on the site of a former forced labor camp and shows a permanent exhibition on forced labor in northern Hamburg from 1943–1945 in one of the remaining barracks . The information center is supported by the Willi Bredel Society .

The largest sports club in Fuhlsbüttel and in the Hamburg-Nord district is the SC Alstertal-Langenhorn with 7500 members (as of June 2009). It celebrated its 100th anniversary on September 5th and 6th, 2009. Other sports clubs are the Alstereck VfW and the Oberalster VfW .

The subway stations Fuhlsbüttel and Fuhlsbüttel Nord on subway line 1 are located in the district. The latter was formerly called Flughafenstrasse .

On 11 December 2008, the Hamburg airport was the airport route of the train bound.

The airport is one of Hamburg's most important employers. Despite the rail connection that has now taken place, the car traffic caused by air travelers is correspondingly dense. Because of this high volume of traffic, the B 433 was expanded at great expense into the four-lane Fuhlsbüttel bypass (B 433n) in the 1990s . As the name suggests, this also serves in particular to relieve the parallel street Alsterkrugchaussee / Langenhorner Chaussee and the surrounding dense residential development in Fuhlsbüttel. By the way, the B 433n is one of the few realized parts of a former plan for the A 25 across Hamburg called Osttangente .

Another important axis is the Maienweg / Brombeerweg / Hummelsbüttler Landstrasse street, some of which also have four lanes. It represents an important connection from Alsterdorf to Poppenbüttel via the street ring 3.