The "Hermann Ehlers Foundation for Citizenship Education and the Promotion of Talented Students e. V. “was founded on March 22, 1968 in Hanover . The initiator was Kai-Uwe von Hassel (1913–1997). It is named after the second President of the Bundestag Hermann Ehlers (1904–1954).

At the end of 1968 the board decided that a second construction phase should be realized in Kiel with a combined academy and student dormitory building. The core of the academy work was and is the voluntary discussion groups. You set content-related priorities and act as a source of inspiration.

The topping-out ceremony for the second construction phase was celebrated on November 14, 1969. The chairman invited to the official inauguration of the Hermann Ehlers Academy on July 9, 1970.

Kai-Uwe von Hassel drove the expansion of the foundation. On May 21, 1969, it was decided to build a student residence in Hanover in the Ihme Center , which was inaugurated in 1975. This was followed by the further expansion of the foundation's activities in northern Germany with the start of building student residences with affiliated academies and communication centers in Hamburg, Osnabrück and Oldenburg. All of the houses opened in 1976. The foundation thus had 825 dormitory spaces and became the leading private provider of student accommodation in northern Germany. The academies and communication centers were also filled with life, and the foundation also rented rooms in Berlin and Bremen in order to host events from there as well. In 1971, the academy began working in Lower Saxony, followed by events in Berlin from 1974, in Bremen from 1977, and from 1979 in Hamburg. In 1971 the working group for the military and social sciences was founded in the academy .

In the tenth year of the foundation's existence, a total of 19,937 participants attended 580 events. The following years were used to consolidate the structures. In this context, the name of the foundation was changed to “Hermann Ehlers Stiftung e. V. ”shortened and the board expanded to 16 members.

The opening of the Wall was a great challenge for the Hermann Ehlers Foundation. In 1990, around 9,000 participants attended 231 lectures and seminars organized by the Foundation's existing academies in the northern - in the future - new federal states. This year, that accounted for almost 30 percent of all events and 25 percent of the guests reached. In 1990, a total of 52,858 visitors attended 1,295 events. 1990 was also the year of records in terms of participants, number and locations of the events.

In the following year this organizational restructuring was completed with the relocation of the central dormitory administration to Hanover. From the beginning, the academies and student residences were designed as one unit. The aim was to give the students the opportunity to gain political education alongside their studies with the academies. While this system proved itself in the early years, the students no longer took up the offer very strongly since the mid-1990s and hardly at all since the turn of the millennium. 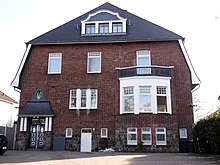 Since too few reserves had been built up over the decades for a comprehensive renovation due to low rents, the board of directors decided in 2008 to sell all dormitories except for the main building in Kiel to a private real estate operator. In return, the dormitory in Kiel was renovated. The academy and the administration of the foundation moved into the former guest house of the Schleswig-Holstein state government.

On December 1, 2019, a new student dormitory was opened on the campus of Christian-Albrechts-Universität zu Kiel , which was built and operated by the Hermann Ehlers Foundation. The Hermann-Ehlers-Haus offers 155 students living space.

In § 2, the foundation's purpose was to promote democratic civic education on a Christian basis. According to its statutes, the foundation has the task of “promoting political education on a liberal, democratic and Christian basis. The work must also serve to promote culture, youth work and international understanding. ”To this end, the Hermann Ehlers Foundation offers seminars, workshops, excursions, study trips as well as evening lectures and discussion events.

The foundation has awarded an honorary prize ( Hermann Ehlers Prize ) every year since 1975, as well as a sponsorship prize, which was renamed the Kai-Uwe-von-Hassel sponsorship prize in 1998 .

The Hermann Ehlers Prize is awarded in the compulsory memory of the service of Hermann Ehlers. It consists of a medal and is awarded to citizens who - as it says in the certificate - “have rendered outstanding services to the free and democratic basic order in Germany”.

The Kai-Uwe-von-Hassel-Förderpreis is endowed with 2,500 euros. It is intended to be an incentive for younger citizens who have "made a contribution to the further development of the free democratic basic order in Germany through their previous activities".