Bärbel Bohley was born as the daughter of Fritz and Anneliese Brosius. After graduating from high school in 1963, she trained as an industrial clerk and then worked as a training instructor . From 1969 she studied at the Berlin-Weißensee School of Art , where she received a diploma in painting in 1974 . In 1970 she married the painter Dietrich Bohley and gave birth to a son in the same year. From 1974 Bärbel Bohley worked as a freelance artist; According to their own statements, their role models were Francisco de Goya and Käthe Kollwitz .

She increasingly campaigned for civil and human rights in the GDR and was therefore subject to restrictions and arrests. After the turning point and peaceful revolution in the GDR , Bärbel Bohley continued to be politically active, fighting in particular to come to terms with the GDR injustice in general, but also legally in her personal case. From 1996 she worked in the former Yugoslavia on possibilities for refugee return and reconstruction. In Bosnia she led a reconstruction program and made it possible for orphans and children from refugee families to spend summer holidays in Croatia . She lived near Split (Croatia) for a long time and was married to the teacher Dragan Lukić from Bosnia-Herzegovina until her death. After twelve years, she returned to her old apartment in Berlin-Prenzlauer Berg in 2008 to be able to treat her lung cancer, which she learned about in May 2008.

In the remaining two years of her life she gave lectures with which she pointed out the power of the Peaceful Revolution and existing democratic deficits, for example on the occasion of the 20th anniversary of the New Forum.

Bärbel Bohley, who had been a heavy chain smoker since her student days, succumbed to bronchial carcinoma . 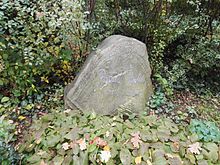 It was honored on September 25, 2010 with a public commemorative event by the Robert Havemann Society in the Academy of Arts (Berlin) , which was attended by around 400 visitors. Lilo Fuchs, widow of the dissident and writer Jürgen Fuchs , recalled that some GDR oppositionists - such as Rudolf Bahro , Gerulf Pannach , Rudolf Tschäpe and her own husband - died early of cancer, and referred to the suspicion that had been expressed several times by the SED -Regime could have radioactively damaged Bärbel Bohley , as Stasi files suggest. At a funeral service in the Gethsemane Church (Berlin) around 1000 people said goodbye to Bärbel Bohley at the coffin. Her grave is in the Dorotheenstädtischer Friedhof in Berlin-Mitte . It was dedicated to the city of Berlin in 2016 as an honorary grave . Your political estate is kept in the archive of the Robert Havemann Society.

The Bärbel-Bohley-Ring can be found in the Berlin district of Gesundbrunnen .

Work for civil and human rights in the GDR

In 1979 Bärbel Bohley was elected to the section management painting and the district board of the Association of Visual Artists of the GDR (VBK). In 1982 she founded the independent initiative group Women for Peace , followed a year later excluded from the district board of VBK and for alleged "treasonable communication" together with Ulrike Poppe in Berlin- Hohenschönhausen in custody came. The Ministry for State Security named as reasons, among other things, her contact with the Greens in the Federal Republic of Germany. As a consequence, she no longer received any government contracts and was no longer allowed to exhibit her works in public.

From the mid-1980s Bohley campaigned for the enforcement of basic rights such as freedom of expression and assembly and co-founded the Peace and Human Rights Initiative . It was therefore counted by the secret police as one of the most dangerous opponents of the SED dictatorship and dealt with in the operational procedures "Wasps" and "Bohle". The Department of State Security put Bohley under intensive surveillance and disintegration measures. The civil rights activist Petra Kelly , who was politically and personally friends with Bärbel Bohley, presented Erich Honecker in September 1987 during his visit to the Federal Republic of Germany with Bohley's graphic "No man's land" , which alluded to the state of GDR society and was inscribed, to allow political changes in the GDR. 1988 Bohley was (along with her then-boyfriend and GDR opposition, Werner Fischer ) as a result of their public relations for imprisoned opposition activists during the SED demonstration on the 69th anniversary of the murder of Rosa Luxembourg and Karl Liebknecht wanted to demonstrate for democratic citizenship, from the State security arrested and forced into exile . However, she and Werner Fischer managed to get a GDR passport. After a six-month stay in the United Kingdom , they both returned to the GDR in August 1988.

Looking back, Bärbel Bohley stated: “But I wanted to go back, because once you've invested something in something, you can't give it up. I also felt at home in the GDR, not because I love it, but because I have or had many friends there. So it was really a place that needs to be changed. In the West I learned that an opposition to which one consciously professes simply belongs in the GDR and the GDR opposition hadn't done that before. " 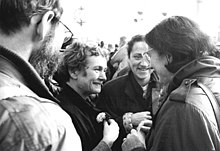 On September 9, 1989, Bohley was the initiator of the civil rights movement New Forum in Grünheide and was the first to sign the founding appeal “The time is ripe”, which called for fundamental changes. Bärbel Bohley took over the contact with West German journalists and, together with the dentist Jutta Seidel, registered the activities of the New Forum with the GDR Interior Ministry. The SED state initially rejected the offer of dialogue as "hostile to the state" and only confirmed the registration - after several demonstrations had taken place - on November 8, 1989. During the reunification in the GDR , her apartment became the office headquarters of the opposition collection movement, which quickly found over 250,000 supporters.

From May to December 1990 she represented the New Forum in the East Berlin City Council. In September 1990 she and other activists occupied her under the motto My Stasi files are mine! the building of the former state security in Berlin's Normannenstrasse . With a hunger strike and a vigil , together with other civil rights activists, she fought to open the Stasi files for personal and academic processing.

After Bohley had inspected her Stasi files, she accused the PDS parliamentary group chairman in the Bundestag , Gregor Gysi , of unofficial work in the MfS. Gysi was her lawyer during her detention in the GDR . Gysi successfully fought against this claim in several lawsuits. She described the delayed and in part failed to come to terms with the GDR injustice in the Federal Republic with the sentence: "We wanted justice and we got the rule of law" . During the evacuation of Mainzer Strasse , she played a key role in the negotiations between the occupiers and the city council and the police. In 1994, Bohley ran as the top candidate for the New Forum for the European elections . In 2002 she supported the FDP in the election campaign for the federal election.

Awarded the Federal Cross of Merit (1994) and the National Prize (2000) for her services to the peaceful revolution in the GDR and German reunification , she has been involved in the war zone of the former Yugoslavia since 1996 . From 1996 to 1999 she headed there for the after the Dayton peace agreement set up by 1995 International Peace Authority Bosnia and Herzegovina OHR (Office of The High Representative) in Sarajevo a reconstruction program for the Bosnian war destroyed houses and organized the return of war refugees to their homes .

Bohley was a founding member of the Bürgerbüro e. V. - Association for the processing of consequential damage caused by the SED dictatorship .

Bärbel Bohley founded the aid organization Seestern e. V., which enables children from Bosnian refugee families of all local ethnicities to have free summer holidays together . Since summer 2006, the organization also helps war refugees on the spot, she built in the region Domanovići near Mostar under financial support of the German Foreign Ministry for 28 refugee families cisterns for water supply . By March 2007, financed by the German Federal Ministry for Economic Cooperation and Development , a further 71 cisterns were built to promote the settlement of those displaced during the war in the region.

In 2001 she returned temporarily from Croatia and was together with u. a. the GDR civil rights activist Wolfgang Templin and the former SED Politburo member Günter Schabowski member of the "Inner Unity Discussion Group" of the CDU candidate at the time for the office of the Governing Mayor of Berlin, Frank Steffel .