Originally, Mark Lee provided as a crew member. In September 1999, however, he was removed from the team and replaced by Curbeam. NASA gave no reasons for this.

The team delivered the American laboratory module Destiny as an extension of the International Space Station (ISS) under construction . The space shuttle Atlantis was connected to the station for a total of six days. During this time, the crew made three exits to install and start up Destiny.

The start of the Atlantis

After taking off from Cape Canaveral , several orbit maneuvers were carried out, which enabled a coupling after just 42 hours of flight time. The Atlantis was the first spaceship to dock on the coupling adapter PMA-3 , which at the time was at the nadir port of Unity . After a brief welcoming ceremony, during which water, a computer, cables, fresh fruit, films on DVD and other personal family gifts also reached the station, the hatches were closed again for the upcoming spacecraft work. 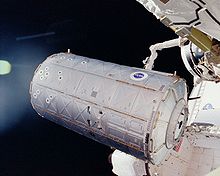 Destiny on the canal arm of Atlantis

On the morning of February 11th, Marsha Ivins dismantled the Unity coupling adapter PMA-2 with the help of the Atlantis Canadarm and transported it to a designated intermediate position on the lattice structure of the station. After leaving the lock, Thomas Jones went to the grid structure and checked the correct position of the adapter. He then acted as a pilot for the transport of the Destiny laboratory module. Robert Curbeam had meanwhile loosened the brackets from Destiny as well as the power cables and cooling lines and removed protective covers from the coupling mechanisms. The module was then lifted out of the loading bay with the Canadarm, rotated 180 ° and brought into the correct position on the Unity module. Automatic coupling bolts then secured the connection. Then Jones and Curbeam connected a series of power, data and refrigerant lines between Unity and Destiny. A small amount of ammonia emerged in crystalline form from one of the lines . To avoid contamination of the shuttle, Curbeam stayed in direct sunlight for half an hour to allow the crystals to evaporate. Jones also brushed him and the equipment. After re-entry and pressure equalization between the lock and shuttle cabin, the astronauts wore breathing masks for around 20 minutes . After that, contamination could be ruled out. The exit maneuver took 7 hours and 34 minutes due to the problem that occurred and the additional work involved.

Then both crews entered the new module and worked on connecting and activating important systems. This included air ventilation, two water-based cooling systems (4 ° C and 17 ° C system), two so-called avionics racks with control systems for internal communication, for position control, life support, environmental data, command and data processing and the energy system. A rack with an air treatment system was also installed. It usually absorbs carbon dioxide from the air station and supports Vosduch system that the module Zvezda is located but could not be started due to a defect. However, the on-board computer and the fire alarm and alarm system were activated.

Thomas Jones during the second exit

When Jones and Curbeam disembarked for the second time on February 12 (6:50 hours), the coupling adapter PMA-2 was initially transported from its temporary position on the grid element Z1 to the front of the Destiny laboratory module and docked there. Marsha Ivins, who operated the canadarm of the shuttle, took over this task again. Jones and Curbeam monitored the release and later the engagement of the automatic locking mechanism. Then they attached covers to the retaining bolts in the Atlantis hold, installed a ventilation duct, several brackets and tension wires for later outboard work and a base for the Canadian manipulator arm of the station on Destiny. The Canadarm2 was first attached to Destiny during the STS-100 shuttle mission in April 2001 and only later moved to a guide carriage. It can then slide along the lattice structure and be used in different places. Since Jones and Curbeam carried out the planned work faster than planned, they were then able to connect power and data lines between the laboratory module and the coupling adapter, remove the cladding on the window of the laboratory module and install a window flap whose closing mechanism can be operated from the inside. During the return of the two astronauts, the gyroscopes were revved up. They were extensively tested on the following days and have since taken over the attitude control for the entire station. It is controlled by the on-board computer of the laboratory module.

After a day of free time, Jones and Curbeam made their third exit during the mission on February 14th (5:25 hours). It was also the sixtieth spacecraft mission of the shuttle program and the hundredth in American space travel. The astronauts installed a spare antenna ( S-band ), carefully checked the physical connections between Destiny and the coupling adapter PMA-2 and loosened the securing of the third radiator on the grid structure. It is required to radiate excess heat that is generated in the new station module. The end of the work was the documentation of the outer skin of the new components through photographs and the testing of a rescue procedure for unconscious astronauts during an exit.

On the last working day together with the ISS crew, further materials were transported to the station. In addition to water and food, the total of 1.5 tons of supplies included mainly spare parts, clothing, tools, computer accessories, a replacement computer, a reserve system for carbon dioxide absorption and a space suit for spacecraft . In the opposite direction, 420 kilograms of waste and packaging material were disposed of. There was also a video conference with high school students in Maryland and a press conference with journalists and scientists at the control centers in Houston and Moscow. In the past few days, the complex's runway had been raised by almost 30 kilometers over four drive periods.

Some minor scientific research was also carried out during the mission. On the one hand, a vessel filled with a large number of frozen protein samples was transported into the station. The vessel is surrounded by liquid nitrogen. This gradually evaporates, which increases the temperature in the vessel and thaws the samples. After about 11 days, the proteins begin to crystallize. The samples were brought back to Earth for further investigation on the STS-102 mission in March. The Student Crystal Experiment was planned by over 400 students from 89 American schools. With this and other experiments (SEEDS, EarthKAM) NASA wants to promote interest and enthusiasm in manned space travel.

The station with the new laboratory module

During the drive phases, the entire complex is set in vibration . Using special devices on board the Atlantis, the frequencies at which the station resonates particularly strongly were determined. If further parts are attached to the station, these so-called natural frequencies also change . Therefore this experiment was repeated on future missions.

The hot exhaust gases from the shuttle engines have a major impact on the surrounding ionosphere . They cause chemical changes, as a result of which a hole measuring around 50 kilometers is created in the ionosphere. Several of these holes were analyzed from Earth with radar and laser . Other routine examinations included readjustment to gravity after the flight, changes in the astronauts' immune system and the recording of GPS data throughout the flight.

After uncoupling, the Atlantis flew around the station. A large number of video and still images were taken. The landing was due to bad weather two days later than originally planned and also on the premises of the Edwards Air Force Base in California.