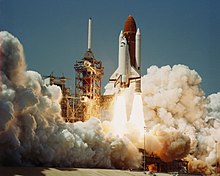 As with STS-5 , the first operational space shuttle flight, two mission specialists were on board in addition to the commander and pilot. The load consisted of the TDRS-1 ( Tracking and Data Relay Satellite ) satellite and some experiments.

The launch of STS-6 was originally scheduled for January 20, 1983. After a hydrogen leak that occurred during a test run of the three main engines (SSME) in December 1982, extensive maintenance work began. A second test ignition five weeks later revealed cracks in an SSME, which was then replaced. Another delay was caused by the contamination of the TDRS satellite in a storm.

Ten hours after take-off on April 4, TDRS-1 was launched from the Challenger's payload bay. A malfunction in the second stage of the IUS (Inertial Upper Stage) of the satellite resulted in a much lower orbit than planned. In order to achieve its final position in geostationary orbit , TDRS had to use its maneuvering thrusters for a period of two minutes.

The space exit (EVA) of the two mission specialists with the new spacesuit , which was canceled during STS-5 , was made up for this time. Peterson and Musgrave spent a total of four hours and ten minutes in space performing the first EVA from a space shuttle. It was also the first exit from the US space program in nine years ( Skylab 4 ).

The scientific experiments concerned earth exploration, materials research and navigation. A production unit was tested, the CFES (Continuous Flow Electrophoresis System) system, which had already flown on the STS-4 and was used to separate chemical substances, especially drugs, from mixtures of substances. It was used to separate materials 700 times faster than in conventional systems on earth, and the end products were four times as pure. In addition, with the MLR experiment (Monodisperse Latex Reactor) ideally shaped plastic beads were produced that are to be used as drug carriers in cancer research.

After five days and 24 minutes in space, Challenger landed safely on Runway 22 at Edwards Air Force Base , California . A week later, the orbiter was transferred back to the Kennedy Space Center in Florida .