STS-34 ( english S pace T ransportation S ystem) is a mission designation for the US Space Shuttle Atlantis (OV-104) of NASA . The launch took place on October 18, 1989. It was the 31st space shuttle mission and the 5th flight of the space shuttle Atlantis.

The mission was to be carried out by the Atlantis under the designation STS-61-G as early as May 1986 , but was suspended due to the Challenger disaster . 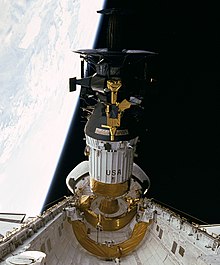 Galileo probe in the payload bay

The originally planned start date of October 12th could not be kept because the control of a main engine had to be replaced. A new attempt on October 17 failed due to the weather conditions on the emergency landing site in Cape Canaveral .

The main payload on this mission was Jupiter's Galileo probe . It was launched into space together with the Inertial Upper Stage (IUS) rocket . Experiments on earth exploration, environmental research, materials technology, astronomy and medicine were also part of this mission, and an IMAX camera was also on board.

The landing took place on October 23 at Edwards AFB , California . Atlantis was transported back to Cape Canaveral , Florida 6 days later by special aircraft.

Filming of the mission were the science fiction film The Wild Blue Yonder by Werner Herzog used.