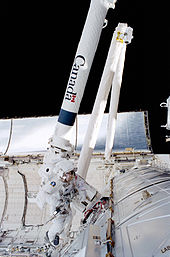 Canadarm2 is a multifunctional robot arm on the International Space Station (ISS). Officially known as the Space Station Remote Manipulator System (SSRMS), the arm is Canada's contribution to the ISS. It is part of the Mobile Servicing System (MSS), which is intended for the assembly of the station, for transport, maintenance and repair work outside the ISS as well as for the operation of external systems and experiments.

Since space transporters have been approaching the ISS that cannot dock independently, the arm has also been used to “catch” these freighters and to maneuver them to the coupling socket. This process called "Berthing" was first used in 2009 at HTV-1 Kounotori , and later also at Dragon and Cygnus . It is also planned for the freight version of the Dream Chaser .

The Canadarm2 was developed and built by the Canadian space company MDA Space Missions . It is a further development of the model already used in the shuttle fleet.

Like most of the systems and devices in the International Space Station, the manipulator has a modular structure. Each module can be repaired or replaced in the station.

The Canadarm2 is not permanently connected to the ISS at one point, but can - not least thanks to its seven degrees of freedom - be moved along the station in different ways.

The robot arm has a gripping mechanism (English Latching End Effectors - LEEs) at both ends, which are equipped with interfaces for data and energy supply. Furthermore, suitable connectors, so-called Power Data Grapple Fixtures (PDGF), to which the arm can be fixed, are mounted at various points on the station . The Canadarm2 can move from PDGF to PDGF over the American segment of the ISS with a caterpillar-like movement.

Alternatively, Canadarm2 can be connected to the so-called Mobile Transporter and moved along the station's integrated truss structure via a rail system.

The computer-aided control takes place from special racks inside the station. Four video cameras (two at the "elbow" joint and one at each end) are used to transmit images to the control console in the American part of the station, from which the astronauts can follow every movement even without direct visual contact and control it using the remote control.

On the penultimate STS-134 shuttle mission , flown by the Endeavor , in 2011 an extension unit that was actually developed to inspect the space shuttle heat shield, the so-called Orbiter Boom Sensor System (OBSS), was left behind on the ISS. It had already proven its usefulness in 2007 during STS-120 when Scott E. Parazynski repaired an ISS solar module . At the station, the device was named Enhanced International Space Station Boom Assembly (German about: Extended International Space Station Boom .)