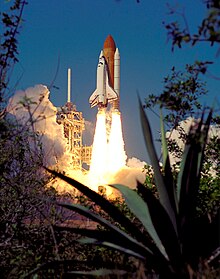 The Endeavor embarks on the STS-99 earth observation mission

The Endeavor before the start of the STS-118 mission

The Endeavor at the California Science Center

The name for the space shuttle was found through a student competition in which a total of 71,652 students took part. In May 1989, US President George HW Bush announced the name Endeavor after James Cook 's first ship of the same name (hence the British spelling instead of the correct spelling Endeavor in American English ).

The Endeavor was built by Rockwell International and cost a total of $ 2.2 billion. She completed 25 successful flights.

The last time the shuttle was overhauled was between December 2003 and October 2005 (Orbiter Major Modification Period) and received important technical and safety-related improvements. In addition to the so-called glass cockpit , an instrument panel equipped with several freely assignable monitors, the Endeavor received an improved navigation system for position determination and the robotic arm extension Orbiter Boom Sensor System (OBSS) resulting from the recommendations of the “Columbia Accident Investigation Board” .

After its last mission in May / June 2011, the space shuttle was assigned as a museum piece to the California Science Center in Los Angeles at the end of the American shuttle program , and has been on display there since October 2012.

The shuttle had a small role in the movie The Core .

Andrew Jay Feustel took the little mole , a cartoon character , with him on the last mission in the form of a soft toy and handed it over to the inventor, Zdeněk Miler , on his return.

In honor of the Endeavor Shuttle, the two astronauts on the SpX-DM2 mission renamed their Dragon capsule in Earth orbit Endeavor. Both had made their first space flights with this shuttle.