The HMS Endeavor ([ inˈdɛvə ]) was the sailing ship of the navigator and explorer James Cook , with which he undertook his first voyage of discovery between 1768 and 1771 . She was the seventh ship of that name in the British Navy.

The British Navy bought the Earl of Pembroke necklace for £ 2,800 for the expedition initiated by the Royal Society in April 1768 and renamed it HM Bark Endeavor (not to be confused with a 14-gun war- Sloop (1763-1780) of the Royal Navy of the same name). Captain James Cook , who had already proven himself as a navigator and cartographer, became the commanding officer . Cook was already familiar with the vehicles of this type from his time as a helmsman in merchant shipping in the North Sea.

The Endeavor is depicted on the New Zealand 50 cent coin .

The Endeavor is often referred to as a " barque ", which in her case does not refer to the rigging, but to the construction of the hull (complete shape with flat bottom). She was rigged as a full ship .

The ship type designation of the Endeavor has always led to confusion. Occasionally the ship is referred to as the “Whitby Cat”, or in contemporary naval files as a “Katt-built vehicle” or even a “Katt-built barque”. KH Marquardt explains this problem in his monograph on the Endeavor . Kat and barque are two different types of ships, and he believed the Endeavor was built like a barque. The name "Katt" probably stems from the fact that the ship originally had light rigging, which was apparently called Katt rigging. The Endeavor was probably a katt-rigged barque before she was re-rigged. This rig of the Earl of Pembroke probably consisted of light pole masts with square sails. An indication of the simplicity of the old rigging, unsuitable for the expedition, is the low price for which the logs were sold by the Navy. After the purchase by the Navy, the Endeavor was rigged to a full ship. Then it possessed at the bowsprit has two yards for blind , three headsail to Fockmast and large boom three Rahsegel (lower sail, Marssegel , topgallants ), at the cross Mast the spanker and between cross and Kreuzmarsrah a single Rahsegel, the cross-sail. A cross or bagie sail (lower sail on the cross mast) was not used. Stay sails could be set between the masts (three between the fore and main mast, two between the main and cross mast), and a few leeward sails could be set on the yards of the fore and main mast. The Endeavor was able to wield a total of nine square sails with the two blind men. The Endeavor was 368 GRT, very fully built because of its original purpose as a coal ship and therefore slow, but with a flat hull practical for expeditions into unknown waters, which allowed the ship to be put on the beach for repairs if necessary. The large hold held provisions and equipment for 18 months. 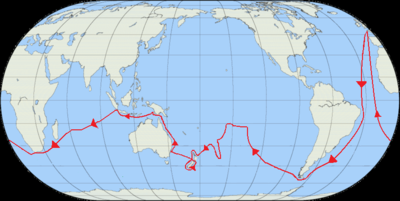 Route of the Endeavor on Cook's first circumnavigation of the world

On August 26, 1768, the Endeavor ran from Plymouth . On board were 94 people and mainly astronomical instruments with which the passage of Venus should be observed. For this purpose, an observatory was to be built on Tahiti to measure the passage of Venus. On April 28, 1770, the crew of HMS Endeavor was the first European to set foot on the east coast of Australia . On June 11, the HMS Endeavor ran aground on Cape Tribulation ( Great Barrier Reef ) and almost got lost, but was saved by repair work by the ship's carpenters.

In 1771 James Cook returned from his first voyage of discovery with the Endeavor . Cook was by King George III. raised to the rank of commander .

The ship was sold in 1775 and sunk in 1778, renamed Lord Sandwich II , as a blockade against French ships in Narragansett Bay off the port of Newport , Rhode Island . The Rhode Island Marine Archeology Project (RIMAP) stated in the spring of 2016 that the wreck was found at one point along with five other ships. Excavations were planned on the wreck. RIMAP and the Australian National Maritime Museum , which were looking for the Endeavor , announced on September 19, 2018 that they wanted to find clues to identify the Endeavor by sampling and analyzing wood from the remains of the ship . Her hull is believed to be made of oak from Great Britain, while most other ships are built in America and should therefore be made of other types of wood.

On the occasion of the 200th anniversary of the first settlement of Europeans in Australia, a replica of the Endeavor was put into service in 1994 , which then visited all the ports of the famous voyage.

After the ship are Endeavor Strait , part of the strait between Papua New Guinea and Australia ( Torres Strait ), the space shuttle Endeavor , and the genus of flatworms Endeavouria named.