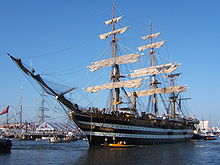 The Amerigo Vespucci at Sail Amsterdam 2005

The Royal Clipper in front of Pula

A full ship is a tall ship with at least three, all fully rigged masts . The number of yards can vary: for undivided Mars and Bramsail sails with royals ( clipper ) there are four, for split Mars and Bramsail sails (modern windjammer rig ) six, and for anniversary rig five yards (no royal sails ). The rearmost ( eighth ) mast carries an additional gaff sail ( mizzen sail ) to support turning and jibing maneuvers . In addition to the gaff sail a square rigger carries more fore- as so-called staysail , which are attached to the shrouds sailing: the bowsprit to the foremast usually four, rarely five jib sail and between poles typically three staysail.

Differentiation from other ship types and names

Often full ships are also referred to as frigate ships. However, this is misleading, as frigates were formed as early as the 17th century, when full-ship rigging did not even exist in its current form. Smaller frigates in particular often only had one latin sail on the last mast at that time . In the 18th century, all larger ships, including frigates, were fully rigged. Historically, the term “frigate ship” goes back to the Blackwall frigates, a type of ship that historically represented the transition form between the Indians and clippers . These ships, in principle disarmed frigates used as fast cargo ships, were the first civilian full ships with modern rigging.

The mast sequence of a full ship from front to aft is:

The four-masted full ship has the " aft mast " in third position :

It is sometimes also referred to as the “main mast”, and because of the even number of masts, it is never the “ middle mast ”. The fourth and last position is the “ cross mast ”. Another name for the masts of a four-masted full ship is: fore mast, main mast, mismatched mast and hunting mast (see also sailing plan ), but is derived from the English where the fourth mast is called jigger mast ("dance mast").

Four- masted full ships like the Drumcliff (built in 1887, as Omega 1898 to Rhedereigesellschaft from 1896 ) and the Ellesmere (built in 1886, as Schiffbek in 1898 to Knöhr & Burchard , Hamburg) were converted to four-masted barques when they came to Germany.

The five-masted ship has the middle mast as an additional mast. Apart from the luxury cruise ship Royal Clipper , there was only one example of this type in the world merchant fleet: the Prussians:

On board the Prussians, in honor of the F. Laeisz shipping company, the fourth mast was called the Laeisz mast instead of the aft mast , which was also the case with the fourth mast of the Potosi , the cross mast:

The origins of the three-masted rigging can be traced back to the 15th century, when three-masted ships with square sails on the first two and a latin sail on the last mast first appeared. As the size of the ships grew, all the masts were gradually supplemented by further sails of square sails. At the beginning of the 17th century the rearmost mast also got a square sail above the latin sail. This was then replaced by a gaff sail in the course of the 18th century , so that from then on the full ship was in its current form. But this form of rigging was named after the frigates, frigate rigging or frigate ship, but the term full ship did not yet exist. This was only introduced in official documents around the middle of the 19th century. The causes are unclear.

As the windjammers grew and a three-masted ship led to oversized yards and sails, four-masted full ships were built. But it turned out that the square sails on the fourth mast were unfavorable and the ship was difficult to steer. In addition, the square sails on the last mast were generally difficult to operate, and the type of ship was more labor-intensive. This is why the four-masted bark sailing ship type was preferred for the large windjammers (e.g. the Sedov and the Kruzenshtern ). Today a few full ships are still in service as sailing school ships , there are no longer any four-masted full ships in service. The last surviving ship of this type, the Falls of Clyde , is moored as a museum ship in Honolulu (Hawaii).

The Royal Clipper of the shipping company "Star Clippers", a luxury cruise ship with one rig (2 masts with 5 yards, 2 masts with 6 yards and one mast with only 4 yards) similar to that of a five-masted full ship (all masts with at least 5 yards ), was modeled on the Prussian ; the four masters of this shipping company, the Star Flyer and the Star Clipper , are four mast staysails - barquentines .

How high or hard a yard ship sails on the wind determines the position of the yards. A ship with a scraper sail (schooner) can therefore sail much higher upwind, as its sails can be parallel to the ship's longitudinal axis, but yards always form an angle to it.