The title of this article is ambiguous. Further meanings are listed under Cutty Sark (disambiguation) .

Photo of the Cutty Sark from 1890 with reduced rigging, taken by Captain Woodget 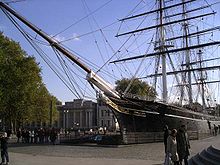 The Cutty Sark is an English tea and wool clipper . She was completed in 1869 and was one of the fastest sailing ships of her time. She was the last clipper built for sea trade. In 1954 she was laid up as a museum ship in a special dry dock in Greenwich , London , but burned down almost completely in May 2007. After the restoration, it was reopened on April 25, 2012.

The name of the ship comes from Robert Burns ' famous work Tam O'Shanter (1791), in whose vernacular, the Lowland Scots , also called Lallans, it means a "short (under) shirt" that belongs to the beautiful witch Nannie . Accordingly, the ship has a lady - the nannie - as its figurehead dressed in a short shirt and a rope in her outstretched left hand (instead of the tail of Tam's horse, which she could only grasp while pursuing him). The Portuguese therefore called them, when the sailor sailed under their flag from 1895, in continuation of the tradition Pequena Camisola ("small shirt") instead of their official name Ferreira (and later Maria do Amparo ).

The Cutty Sark was built in Dumbarton (Scotland) on the River Leven (flows into the Firth of Clyde west of Glasgow) by the Scott & Linton shipyard for the London shipowner John Willis and was launched on November 25, 1869. Her motto on the bow: “Where there's a Willis a way - Where there's a will is a way” - a play on words with the name of the shipowner Willis, who always has a tall white cylinder wore. Scott & Linton, who had agreed a price of 16,500 pounds sterling for the ship , had to file for bankruptcy at the end of construction - the Cutty Sark was their only large ship ever built. The William Denny and Brothers shipyard completed the construction.

Initially, the clipper was used to transport tea until 1877. The ship never won any of the famous tar races, partly because of the levelheadedness of its captains G. Moodie and FW Moore. After the opening of the Suez Canal , the tea was transported by steamboats , which made the journey from Shanghai through the Suez Canal to England in 1875 in 42 days, while the Cutty Sark took 102 days to travel around the Cape of Good Hope . Later it went as a tramp ship with various loads. After a hard time between 1877 and 1882, the Cutty Sark became the fastest sailing ship of her size and time (Wollfahrten around Cape Horn ) in 1885 under her seventh and longest-serving captain Richard Woodget , set several records and also beat her old rival Thermopylae . Captain Woodget first had the spars and mainmast shortened around the Skystenge and removed all leeward sails that were not needed for the voyages in the Roaring Forties , but this allowed the crew to be reduced from 28 to 20 men. Only after being completely satisfied with the changed rig did the new skipper set off on his first voyage to Australia with the ship that he was to lead and make famous for ten years.

1895 for 2100 pounds sterling to the Portuguese sold Reederei "YES Ferreira & Companhia" and Ferreira renamed, it was after Entmastung 1916 near the Cape of Good Hope , for cost reasons to Barkentine umgeriggt and six years later, in 1922, to the "Companhia Nacional de Navigação ”and renamed Maria do Amparo . In the same year, the desolate ship, coming from a repair stay in London, ran into the port of Falmouth because of a storm . The already retired captain Wilfred Dowman recognized the 53-year-old ship, which he had always valued as a cabin boy, and bought it in Lisbon from the Portuguese owner for 3,750 pounds sterling, moved it to Falmouth and restored it with the help of his wife, who showed his enthusiasm shared for the beautiful ship, in its original condition. It served as a stationary training ship in Falmouth until 1938. In 1938 the Cutty Sark came as a gift from Captain Dowman's widow to the Thames Nautical Training College in Greenhithe (until 1949). In 1954 the famous ship was transferred on its last voyage to the specially built dry dock in Greenwich , where it was accessible as a museum ship from 1957.

At the beginning of October 2006 the ship was closed for extensive restoration work and should be reopened in 2009. However, there was a fire on May 21, 2007, presumably due to a defective vacuum cleaner, in which the ship's hull burned out to a large extent. For example, the masts and the steering wheel - - Fortunately, about half of the ship equipment were at this time because of work outsourced and-provided for restoration teak from the 19th century (worth 400,000 pounds sterling) was not installed. The iron skeleton was also not completely destroyed by the fire. Due to these circumstances, a complete restoration was possible. The reopening took place on April 25, 2012 in the presence of Queen Elizabeth II and Prince Philip . On October 18, 2014, the ship was badly damaged by a fire on deck .

The Cutty Sark station of the Docklands Light Railway is not far from the current fixed location of the ship .

A Scotch whiskey ( Cutty Sark Scots Whiskey from Berry Bros. & Rudd ) and indirectly also a long-distance regatta for sailing training ships were named after the Cutty Sark : The Tall Regatta, which was first held in 1956 and has since taken place in various European waters and has been followed by millions of spectators Ships' Races was sponsored from 1973 to 2003 by Berry Bros & Rudd, who sold the Cutty Sark Scots whiskey . The regatta became famous under the name Cutty Sark Tall Ships 'Races during this time and was not renamed Tall Ships' Races again until 2003.

The fate of the Cutty Sark as a dry tourist attraction is also addressed in a song ('Single handed sailor' on the 1979 album ' Communiqué ') by Dire Straits .

The Cutty Sark is the scene of the plot of the chapter The Cowboy Captain the Cutty Sark from Don Rosa's Uncle Dagobert biography His life, his billions .