Greenock ( Grianaig in Gaelic ) is a town in western Scotland , Inverclyde District and the traditional Scottish county of Renfrewshire . It has 44,248 inhabitants. The city is located south of the confluence of the River Clyde in the Firth of Clyde , about 40 kilometers west of Glasgow .

The origin of the city name is uncertain. The main opinion is that the city is named after the Gaelic word for sun, grian , either as grian-aig (sunny bay) or grian-cnoc (sunny hill).

In 1589 the Greenock parish was restored. Greenock was founded as a fishing village before 1592 when it split from the Inverkip parish . In 1635 Greenock received city rights. After 1707, Greenock became the main port on the west coast of Scotland, particularly for traffic with America and the import of sugar from the Caribbean.

On November 21, 1835, more than 30 people were killed when the Whinhill Dam in Greenock broke.

On May 6 and 7, 1941, several houses were damaged by German aerial bombs during two night attacks on the shipyards.

Greenock has traditionally been an important site for shipbuilding since the early 17th century . ( Scotts Shipbuilding & Engineering Co. , Lithgows - from 1967 Scott Lithgow , Caird & Co. , Greenock Shipyard Co., Cartsburn and Cartsdyke and Klondyke) Ships were mainly built for the Royal Navy .

John Walker founded one of the first sugar refineries in Greenock around 1850, followed by Abram Lyle in 1865. When Tate and Lyle closed the Greenock refinery in 1997, Greenock's 150-year tradition as the capital of the sugar industry ended.

IBM founded the first subsidiary in 1951. The production of laptops ( Thinkpad ) and desktop computers was sold to Lenovo . Today, IBM Greenock is a service provider.

National Semiconductor has been producing silicon wafers since 1970 .

Historically, there were three whiskey distilleries in Greenock, all of which bore the city's name. Only the distillery , which existed from 1795 to 1915 , was of national importance. The other distilleries only existed in 1825 and from 1825 to 1828.

With the Waterfront Leisure Center, Greenock has a large sports center on the banks of the Clyde with a swimming pool, ice rink, gym, health center, dance studio, bar and café. There are also several sports centers for indoor soccer, badminton, basketball, squash, volleyball, tennis and fitness. Battery Park is a great park for football, rugby, and other outdoor activities. There is a heated outdoor swimming pool with salt water in Gourock .

With the Waterfront, Greenock owns a small cinema in which up to seven different current films are shown in several halls.

Greenock is rich in bars and clubs.

Greenock owns a variety of churches. 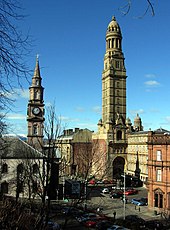 Town hall with the "Victoria Tower" from 1886

The town hall has a large ballroom for concerts and meetings. Clubs can also celebrate their ceilidh here . The town hall tower is 75 m high.

In the square in front of the town hall there is a group of statues commemorating the ship workers who made Greenock rich. There is also a beautiful Victorian fountain further to the right of City Hall (almost in front of Greenock's main church).

The James Watt statue is relatively hidden on the way between the City Hall and the Waterfront Center.

Greenock has a lovely promenade called the Esplanade, from which one has a beautiful view of the landscape north of the Clyde.

There is an anchor on Lyle Hill in memory of the French Navy that was stationed at the Clyde during World War II. From there you have a good view over the Clyde.

Greenock owns the Arts Guild Theater, which not only hosts many guest performances, but also dance classes for children and other groups and events.

Not far from George Square is the McLean Museum and Art Gallery . One room in the museum is dedicated to the engineer James Watt . His statue is in the anteroom of the building.

Greenock also has several libraries. In the central library opposite the town hall you can also use PCs for Internet research.