The Clyde , River Clyde , ( Scottish Gaelic : Cluaidh ) is one of the great rivers in Scotland . The Clyde is the tenth longest river in Great Britain at 176 km and the third longest in Scotland. On the Clyde lies Glasgow , the largest city in Scotland. The Clyde has long been of great importance to the shipping and shipbuilding industry of the United Kingdom.

The Clyde has its source in the Lowther Hills in South Lanarkshire . It arises from the confluence of the two rivers Potrail Water and Daer Water . At the upper reaches of Corra Linn it forms a waterfall. At Greenock it flows into the Firth of Clyde . 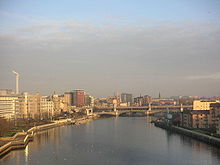 The Clyde near Glasgow

During the era of the Industrial Revolution , the Clyde and Port of Glasgow were of great importance to trade with North America. The Clyde became an important trading center for tobacco and cotton in the 18th century. After trade subsided, shipbuilding took on the highest priority along with the steel industry. During the Second World War , the shipyards suffered severe damage from German bombing attacks. In the wake of the general recession, shipbuilding began to decline on the Clyde after the war, so that most shipyards had to close. The result was a dramatic rise in unemployment in the 1960s and 70s. In 1967 the Queen Elizabeth 2 was the last passenger ship built on the Clyde. Today there are still two shipyards in Govan and Scotstoun , both of which belong to the BAE SYSTEMS armaments group . This is where the Daring- class guided missile destroyers and the Bay-class landing ships are built.