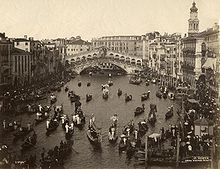 Regatta on the Grand Canal in Venice, in front of the Rialto Bridge , Carlo Naya

Originally, the regatta was a gondola race on the canals of the city that took place in Venice from the Piazzetta . The Venetian word regata has been documented since the 15th century, when competition had a long tradition. Regatta has been a general term for a boat race since the 18th century. The original meaning of the word is uncertain.

When rowing , the regattas are carried out according to the guidelines of the DRV and the FISA .

The rowers are divided into fixed age groups. The age information means that the rower rides in this age group up to and including the year in which he reaches this age.

Rowing regattas are held at distances between a few hundred meters and several thousand kilometers ( ocean rowing ). Since mostly natural routes are used, the route lengths vary greatly depending on the given conditions.

On the short and normal routes, each boat has its own runway. As far as possible, the individual lanes are separated by buoys in regattas and championships (Albano system). On smaller regattas, where there are often only three or four lanes, the lane numbers are displayed over the course at regular intervals. They also serve the rowers as an indication of the route already traveled, as they are usually placed at intervals of 250 m. Long-distance regattas usually start with a time delay of 30 to 60 seconds, so that the course must be a maximum of two to three lanes wide. In such cases - apart from the start and finish - there are usually no route markings. Due to the different start times, the same competition conditions cannot always be guaranteed, as waves and wind conditions change slightly. In English-speaking countries, such long-distance regattas up to 8 kilometers in length, so-called heads, make up a large part of the races.

If the type of regatta allows it, the races are differentiated according to performance classes, i. That is, the faster race against each other in one run, the slower in another. In general, the lot decides on the starting places. The starting positions can also be set in a targeted manner. The aim of this method is to first separate powerful rowers from one another. This is used, for example, in performance tests, which are decisive for the formation of the national team.

In championship regattas, the fastest boats - depending on the size of the field - go straight to the semi-finals or the final from the preliminary races, depending on the placement and number of preliminary races. The remaining boats have a second chance to qualify for the final in the so-called hope race . The next six boats that could not qualify for the finals of the best go to the "small finals", also known as "B finals". In rowing regattas, only 1st place in a run is generally rewarded with a medal , in rowing championships the first three places in the "A-Final".

The boats arrive behind the start line a few minutes before the start of the race. A referee will announce (unless previously announced) the division of the runs and the runways. As soon as the runways are clear, the boats lie on the runways and are aligned by the bowman, while the start assistants lying on the so-called start pontoons / boats hold the stern.

A competition judge at the level of the start line ensures that all boats are aligned (boat tips at the start line). Once this has happened, he gives the starter a corresponding signal. The starter names the clubs and runways, when "Attention" the teams go to the start display. The starter then raises the red flag. At the same time as the “Go!” Signal, the starter lowers the flag and the race and timing begin.

There is also the traffic light start (mostly on fixed regatta courses and large regattas), which initially proceeds as described above, but in which, after "Warning" or "Attention", a traffic light system is first switched to red and then changes to green or yellow, whichever then serves as the start signal. The visual start signal must be coupled with an acoustic (horn).

If a false start is detected, the red flag is waved and a bell is rung. Traffic lights also flash and horn - if possible - to indicate a false start. The boats then return to the start. The team that triggered the false start will be warned and advised that they will be excluded if they start again. If the team was warned in advance, the team will also be excluded from the race.

When the boats are a few meters away from the start, the referee drives a motorboat after the run in order to monitor the race and prevent collisions. Preparations for the next race usually begin at this point.

During the race, the referee gives instructions if a boat leaves its lane and enters the lane of another boat and interferes with it. However, should a boat drive away from the field onto the bank or out of the racing area, this is usually not announced. The referee also has the right to disqualify boats if they consistently leave their lane several times or to stop the race in the event of an accident.

In winter, when no regattas outdoors are possible, Ergo-Cups take place in many cities . The rowers row on so-called rowing ergometers , which roughly simulate the rowing process. These ergometers are equipped with small computers that can calculate different values ​​and stop the time so that performance can be compared.

“24-hour regattas” often take place in large, still waters (lakes or quarry ponds). The principle of these regattas is similar to that of a relay race, the competition course is self-contained and the individual boats of a club row alternately. The regatta lasts 24 hours and is not interrupted by bad weather (rain, fog). The winner is the club that has covered the greatest distance during this time. These regattas are not necessarily about winning - being there is everything. Accordingly, there are often blind rowing clubs and smaller rowing clubs with only a few participants at the start, which (in contrast to the large clubs with many participants) have little chance of victory. In general, you will spend the night in a tent near the changeover point. Well-known 24-hour regattas take place in Berlin and Hürth near Cologne , for example . 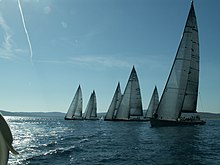 When sailing , the regattas are carried out according to the guidelines of the German Sailing Association and World Sailing .

A distinction is made between one-class regattas and equalization regattas. Class regattas are held between boats of one boat class. Boats of different classes can take part in equalizing regattas. There are relatively simple compensation systems ( yardstick system) and complicated calculation systems (IMS - International Measurement System; ORC - Offshore Racing Congress). The number of boats participating in sailing regattas is usually not limited in Fleet Races . However, there are restrictions on the number of starters, depending on the venue, at most German championships or international German championships - here especially in the youth and youngest division. In addition, for example, the participants in the largest catamaran race in the world, the Ronde om Texel , are restricted in order to reduce the risk of collisions between the several hundred participants. Well-known fleet races are the Volvo Ocean Race (formerly the Whitbread Round the World Race ) and the Vendée Globe regatta as well as the regattas of the Olympic boat classes. There are also so-called match races in which only two identical boats or boats with the same racing value compete against each other. The most famous match race is the America's Cup .

For short-distance sailing regattas, different course sequences have become established. In the past, the "Olympic Triangle" was used almost exclusively, a course roughly in the shape of an isosceles triangle. The first stretch always leads against the wind in order to straighten the field a bit when crossing at the beginning. In the dinghy area, the triangular course is increasingly being replaced by the trapezoidal track, in which four buoys are used as turning marks. In catamarans and in many dinghy and keelboat classes with spinnaker or gennaker , the up-and-down course has prevailed, with only two turning buoys next to the start line. However, in order to straighten out the field at the turning marks, a waste barrel - in windward direction - or a "gate" (gate) - in leeward direction - is often used.