The Rialto Bridge ( Italian: Ponte di Rialto ) in Venice is one of the most famous buildings in the city. The bridge crosses the Grand Canal and is 48 m long, 22 m wide and 7.50 m high. The clear width of the single arch is 28.8 m. The foundations of the two abutments consist of post gratings with 6000 rammed wooden piles on each side. The bridge next to the Fondaco dei Tedeschi connects the Sestiere San Marco with San Polo at a neuralgic point. The name of the bridge refers to the Rialto area in San Polo, which a few centuries ago was the city's main trading post. Rialto is derived from the Italian Rivo alto 'high bank. The Rialto area is the highest in Venice above mean flood.

Detail of the Rialto Bridge 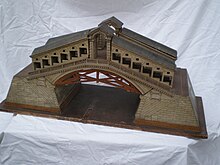 Model of the Rialto Bridge by Wolf Jacob Stromer

In the early Middle Ages pontoon bridges existed over the Grand Canal, but a wooden substructure for a bridge for the period around 960 ± 59, which was called Ponte della Moneta , could be verified using wood samples and using the radiocarbon method. The Chronica per extensum descripta by Andrea Dandolo reports on the construction of a wooden bridge in 1246 under Doge Renier Zen . At the end of the 15th century, the pilgrim Arnold von Harff describes the building as "eyn long hultzen bruck". Then he continues. "Dae you kumpt off eynen kleynen Platz, heyscht you realt", where, every day at "ix ader x vren" the traders and the changers gathered. He expressly emphasizes that, thanks to transfers, the money transactions were carried out without a lot of coins (“little money”). Goldsmiths and jewelers as well as numerous craftsmen also sat there.

As a result, due to the rapid rotting of the building material or due to fires, several wooden bridges were built or repeatedly renovated until the decision was made in 1507 to build a stone bridge. Decades of discussion about the financing and design of the building followed. Well-known architects such as Michelangelo , Andrea Palladio and Jacopo Sansovino took part in the competition for the redesign . Ultimately, a bridge with a single segment arch based on the designs of Giovanni Alvise Boldù and the relatively unknown Antonio da Ponte was realized , which enabled a faster flow of traffic on the busy Canal Grande than a bridge with several arches. This construction also allowed shops to continue to be built on the bridge in the city's commercial center . The decision to realize it was made in 1588. Between 1588 and 1591 it was built by Antonio da Ponte under the Doge Pasquale Cicogna (inscriptions and coats of arms on the sides remind of this) and opened to traffic on March 20, 1591. Until the Accademia Bridge was built in 1854, it was the only footpath across the Grand Canal.

In front of her three other bridges stood one after the other in the same place. The first dates from 1181 and was built by Nicolò Barattieri. The second (mid-13th century) was made of wood and rested on pillars. This bridge collapsed in 1444 under the weight of a crowd who were watching the wedding ceremony of the Marchese di Ferrara from here.

A building model made of wood that can be dismantled into its individual architectural parts was owned by the Nuremberg council builder Wolf Jacob Stromer . It cannot be proven whether it was available as a template for the construction of the Nuremberg meat bridge. It is still in the original transport box in Grünsberg Castle near Altdorf in the Nuremberg region, which was privately owned by the Stromer family until 1999.

In Leverkusen, a bridge built with shops in the area of ​​the pedestrian zone was named Rialto Boulevard based on the Venetian original .