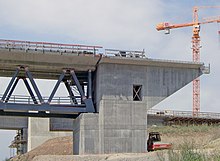 Fighter foundation or abutment of the arch of the Froschgrundsee viaduct

In bridge construction, an abutment is a component that creates the transition between the bridge structure and the earth dam .

Abutments of girder bridges usually consist of the foundation and the abutment walls , possibly with a support bank for the bearings and mostly with side wing walls.

The name originates from the arch bridges , in which the arch end for removal of the horizontal and vertical forces from the vault thrust abutment, usually today fighters foundations called, supported on the ground.

An abutment made of a natural stone for bridges is called a support cuboid . It is a stone block that takes the load of a steel or wooden bridge, for example. This stone of the historical bridge construction is subject to particularly high requirements in terms of pressure and weather resistance . The size of the cuboid must be determined according to the forces to be expected.