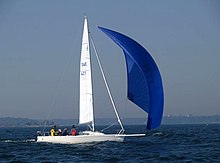 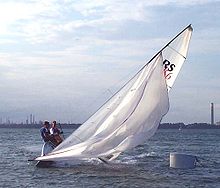 This boat luffed strongly in a gust and the gennaker collapsed

A gennaker is a large, bulbous, asymmetrically triangular headsail that is made of relatively light sailcloth and is suitable for space to half wind courses .

The term “gennaker” is an artificial word; the combination of genoa and spinnaker describes the characteristics of this sail. The name is a registered trademark of North Sails , which has become a generic term.

The sail is driven with a flying round luff in front of the forestay . The neck (the front lower corner) is used for trimming with a pulley-block fixed or with a sling in a special bow fitting or on an extendable forward spinnaker pole struck. The head (the front upper corner) is attached to a special spinnaker case that emerges from the mast above the forestay fitting . The sheets are attached to the clew (lower rear corner). The leeward sheet is led to the stern of the ship and from there via a roller into the cockpit . The windward sheet, which is used as a new leeward sheet after a jibe , is led backwards around the forestay.

Compared to spinnakers, gennakers are much easier to set, drive, trim, jibe and recover. They are therefore often used on cruising yachts instead of a spinnaker as a good and effective sail for space to half-wind courses. They are even easier to set and retrieve with a hose .

Favorable sailing courses for gennakers are, due to their construction, space sheet to half wind courses . If the luff is luffed beyond half wind, the luff falls and the sail loses its effectiveness. If you drop down on a downwind course, the sail falls into the slipstream of the main sail and collapses.

The luff must always be kept round. This rounding is controlled with the tackle on the sail neck, if not available with the spine halyard. The leech must not touch the pulpit. The rounder the luff, the flatter the sail (this is often misjudged). The sheet should be moved in such a way that the luff in the middle area always sags a little.

The neck of the sail remains attached to the jib, while the clew wanders around the outside of the headstay of the ship. So the port and starboard sheets are attached at the same time. Make sure that the long sheet does not fall into the water and be run over.

The gennaker works mainly according to the wing principle. See aerodynamics of the sail . On courses higher than downwind, some fast skiffs , such as the international 14-foot dinghy , reach extreme speeds of over 25  knots . On deep sea catamarans and trimarans , similar and sometimes even higher speeds are achieved, but these also result from the construction of the boats.