As Mast is called a completely or almost vertically on ships erected mast of wood, metal or other solid materials. Masts were originally only used to carry sails and the fittings necessary for their use, later also as lookouts and as carriers of various ship parts, such as radio antennas , radar reflectors , position lights , etc. 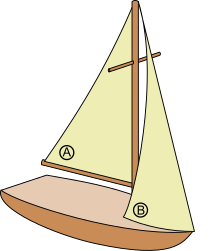 Sails arrangement of the slup rigging

Most pleasure craft and yachts are slup rigged , with a single mast to which two triangular sails are attached. In addition, there are also ketsch - yawl - and schonergetakelte yachts, but these are rarely built today.

The masts used to be made of wood. Today they are mainly made of aluminum, with regatta boats mostly made of CFRP ("carbon fiber"). If wooden poles were built in massive form up to the beginning of the 20th century, hollow wooden profiles then prevailed. Aluminum and CFRP masts are always made as hollow profiles. In addition to better stability, this results in the possibility of laying traps and cables protected inside the mast.

Due to their special cross-section, profile masts have a flow- promoting effect and sometimes act as an additional "sail area".

Innovations such as lattice masts or A-shaped masts, which are erected without shrouds , could not prevail for cruising or regatta ships and were limited to very isolated applications by do-it-yourselfers .

The mast is usually in the mast track on the keel and is passed through the deck. The opening is closed with a mast collar so that no water can penetrate . Alternatively, a mast can also stand on the deck, but must then be supported from below on the keel so that the loads do not bend the deck. Usually masts are supported by the standing rigging, free-standing masts are only common with small dinghies like the laser (the mega yacht Maltese Falcon is an exception ).

When trimming the mast or rig , the position, rigidity and curvature of the mast are controlled and changed. This is part of the sail trim and changes the sailing characteristics of the ship. Among the trimming devices on the mast include the Standing Good , but also the mainsheet and vang act on the tree on the mast trim.

Construction of the masts

In the beginning, masts consisted of a straight tree trunk. This type of mast is called a pole mast .

As early as the 16th century, the cross-section of the masts was composed of several pieces of wood and held together with Wuhlingt ropes and iron rings ( built masts ).

In order to achieve a greater height, the lower mast is lengthened by means of rods , so a total length of up to 60 meters measured from the keel can be achieved. These masts are called attached masts or split masts.

The lower part, which extends to the keel of the ship's hull, is called the lower mast, and one or more rods follow above. The first stalk is the Martian stalk , followed by the Bramstenge . On tall steel ships, the lower mast and the Mars stalk often consisted of a steel tube, the bram stump usually made of wood. At the top, the lower mast on the spreader carries a platform called Mars. The shrouds of the Martian bar begin from this spreader. This arrangement is repeated in the case of the Bramstenge.

The forces of the sails on the mast construction are introduced into the hull structure by standing and moving rigging, forward and aft (rear) by stage, laterally by shrouds or guards .

To the sailors aloft to allow (climb) into the rigging, particularly necessary for the operation of Rahseglern , a ladder, can in the shrouds as sprouts ratlines be knotted. The knot Webeleinenstek therefore got its name. The upper end of a ship's mast is called a mast top, while the upper end is called a flag button .

Traditionally, when building a sailing ship, a coin is placed under the mast; this custom is still practiced today.

Depending on the rigging , the masts are designated as follows from front to back:

In Germany there has been a tendency since the end of the 19th century to call the last mast of a full ship cross mast and the corresponding one for a barque mizzen mast. It also happened that the third mast of a four-masted barque was referred to as a cross mast, although its bream was driven aft to the mizzen mast (see the article cross mast for the origin of the name ). Before that time, the terms mizzen and cross were synonymous in use.

The English terminology of ship masts differs from the German system. This is worth mentioning as there was no uniformity in certain areas in the Anglo-Saxon system, but the naming had an effect on German ships. Because, for example, six masters were never built for German shipping companies , there were no originally German mast designations for the English “jigger mast”, “driver mast” and “pusher mast”.

In the English terminology of ship masts, the cross mast appears as "mizzen mast" and is the mast behind the "main mast" (literally: main mast ("large mast" in the German system)). According to the Anglo-Saxon system, behind the “mizzen mast” on four-masted full ships (as the last) and ships with more than four masts ( barges , gaff schooners , barkentines ), the fourth mast is the “jigger mast” (dancer mast).

In the case of the German five-masted sailors ( Potosi , Preussen , RC Rickmers ), the middle mast was added as the fifth mast compared to the four-masted ships. At the F. Laeisz shipping company , the fourth mast was named "Laeisz mast" in honor of the founder.

In the case of six masters (gaff schooners, schooner boats), the fifth mast is called the “driver mast”. The last mast on all barges, schooners and barkentines was the "spanker mast" (mizzen mast). The “pusher mast” as the sixth mast was only available (in this system) on the Thomas W. Lawson , the only seven- mast gaff schooner ever built. Since there was no uniformity in the English mast naming system, the "spanker mast" was sometimes placed in front of the "driver mast" (see the naming of the masts by Thomas W. Lawson ).

Since no six-masted mast has ever been built for German shipowners , there were no originally German mast designations for “jigger mast”, “driver mast” and “pusher mast”.

On machine-driven ships, masts serve as carriers of, for example

In addition, there are also motor-driven ships (mostly small fishing boats) that drive a small support sail on the mast, which, however, is not used for propulsion, but only to dampen rolling movements in the sea.

Towing horses pull the rope that is attached to the about 10 m high, guyed towing mast in the forecastle - around 1880/1890

The tow mast of the inland waterway vessels was used to fasten the towing ropes that were pulled from the bank by people or draft animals ( towing ). Its height results from the necessity that the pulling rope, which is stretched under the tensile force but sagging under its own weight, does not touch other watercraft, the water surface or the bank including any mooring lines. 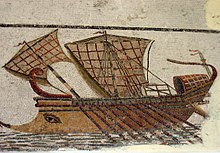 The idea of ​​equipping a sailing ship with a second mast in order to increase speed and improve sailing characteristics was first implemented in the northern Mediterranean with the introduction of the foremast : The oldest two-master is on an Etruscan pyxis from Caere (Italy) from the Middle of the 7th century BC Pictured BC. It shows a warship with a reefed main sail attacking an opposing galley using a foresail . A large foresail on an almost vertical foremast is shown in an Etruscan tomb painting from 475–450 BC. Reproduced BC. An artemon ( Greek for foresail), which is the size of the main sail, adorns a Corinthian crater from the late 6th century BC. BC, but were generally content until the 4th century BC. BC Greek long ships with the main mast.

On Roman galleys , where the headsail was used quite frequently, the mast was typically tilted over the bow at an angle of about 45 ° , which made it resemble the later bowsprit ; the small square sail seems to have been raised less for propulsion than as a steering aid. Although pictorial evidence is our most important source, evidence of fore masts can also be provided archaeologically by mast tracks that are too close to the bow for a main mast.

Roman merchant ship ( corbita ) with main and foremast under sails

The artemon developed in Roman times together with the mainsail and the topsail to form the standard sails for ocean-going ships, which was supplemented by a mizzen sail on the largest cargo ships . The first known three-masters are the huge Syracusia , a magnificent ship that was built around 240 BC. Commissioned by King Hieron II and designed by Archimedes , as well as other large ships of the merchant fleet of Syracuse . Among the imperial grain trucks that ran between Alexandria and Rome were those with three masts. A mosaic in Ostia from around AD 200 shows a three-masted cargo ship entering the port of Rome. Special vessels contributed sometimes significantly more masts: Theophrastus ( Hist. Plant. 5.8.2) reports how the Romans of using fifty sailing driven giant raft timber from Corsica over the sea approach brought.

Three-master from the Renaissance period by Lorenzo Costa

Throughout antiquity , the sail area of ​​the foresail and mizzen sail remained well behind that of the main sail, but was still large enough to require all running gear to function. In late antiquity , the foremast lost most of its tilt and on some ships rose almost vertically into the air.

Until the dawn of the early Middle Ages, the rigging in Mediterranean shipping underwent a profound change: the Latin sail , which was originally used on smaller Greco-Roman watercraft, replaced the ancient square sail, which almost completely disappeared from the scene by the 14th century should (whereas it continued to prevail on Nordic sailors). The Dromone , the late- rigged main battle galley of the Byzantine Navy , most likely had two masts, a larger foremast and one amidships . The mast lengths are estimated to be about twelve and eight meters respectively, slightly shorter than that of the Sicilian war galleys of the time.

Multi-masted sailors reappeared in the Mediterranean in the late Middle Ages . The size of the ships increased steadily and with the growing tonnage the need for more masts increased to ensure seaworthiness. Unlike in antiquity, however, the mizzen mast was first introduced on medieval two-masters, which can be traced back to at least the middle of the 14th century in images from Venice and Barcelona . In order to balance the sail plan , the next logical step was to add a mast in front of the main mast, which is first depicted on a Catalan ink drawing from 1409. With the establishment of the three-master in European shipping, driven by square and latin sails and controlled by a hinged stern rudder , the technical basis was given at the beginning of the 15th century to set off on the great voyages of discovery .

Masts are sometimes designed to be foldable or retractable in order to be able to drive under overhead obstacles such as bridges. Critically low bridges can be equipped with a water level-dependent display of the free space above the water level. So that ships with high masts can pass and traffic routes over bridges can still cross a body of water at a lower level, lifting bridges , swing bridges and bascule bridges were built and temporarily opened for shipping.