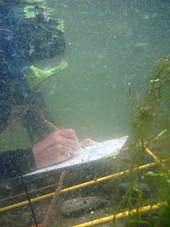 The importance of underwater archeology varies from region to region and is causally dependent on geographical and geophysical circumstances. In Scandinavia, for example, since the end of the last ice age, the Würm Ice Age , which ended around 12,000 years ago and thus ushered in the Holocene , a so-called postglacial uplift has taken place due to the loss of the enormous weight of the ice armor , which continues to this day. As a result, the former shallow water areas, usually the potentially most interesting areas for underwater archaeologists, are now on land, so that with a few exceptions, underwater archeology hardly plays a role, for example to advance research into the history of the Vikings .

For other areas close to the banks, the importance of this division lies in contrasting post-glacial developments, which, due to the rise in seawater (up to 120 m in some areas), have moved formerly dry living spaces , especially from the Mesolithic period, under today's water lines, such as Doggerland between the British Isles and Denmark or the area off the coast of Northern Ireland , which was only recently investigated in more detail in a complex project (Joint Irish Bathymetric Survey Project (JIBS)).

The special importance of this not yet very old branch of archeology results from the particularly good conservation of organic materials such as wood and textiles , but also leftovers and other organic waste in the absence of air in fresh water. The informative and informative power of the recovered objects is therefore very high and naturally also affects all relics of a maritime nature, so that insights into the history of seafaring arise. Ship archeology has developed as a special branch.

In warm and salty seas, such as the Mediterranean or the Red Sea, wood and other organic materials are severely attacked by the shipworm, and older wrecks rarely have more than 5% of the hull. The special information content lies in the received materials from which the shipload consisted, such as copper bars, ceramics or architectural elements or marble sarcophagi from Roman times, the origin of which can sometimes be determined and thus information about trade relations, travel routes, the state of the art and can also give social structures. Interesting examples of this are the Ulu Burun ship or the wreck of Yassi Ada .

The underwater sources can be developed not only by diving, but also by draining the bed of the water with the help of sheet piling . In this way, for example, part of the old port of Haithabu was drained and an old Danish merchant ship was salvaged. Other examples of underwater archeology are the salvage of the Bremen Hansekogge from 1380, the Vasa , the Mary Rose and ships off the Turkish coast off Uluburun , Bozburun and Küçüven Burnu near Marmaris and at Cape Gelidonya (near Antalya ), Kyrenia on Cyprus, the wreckage before Alicante , and the excavations at La Tène (late Iron Age). Shipwrecks are also being investigated in the Red Sea ( Sadana Island ). Danish examples are the residential areas Møllegabet I + II (Mesolithic residential areas) and Tybrind Vig (a Neolithic settlement) on the island of Dejrø (between Fyn and Ærø ). These are two of about 70 places registered so far.

Ancient shipwrecks and ruins located under water by the Convention for the Protection of the Underwater Cultural Heritage of the UNESCO -protected.

Until the advent of diving, occasional finds were usually made by professional divers (e.g. sponge divers) who used them themselves ( e.g. amphorae ) or as scrap (cannons etc.) or sold to museums or collectors. The scientific value of the finds was mostly no longer available, as the pieces were torn out of context and the recovery was often very brutal. With the advent of diving, wrecks in shallow water were looted in many places, especially in the Mediterranean. From the 1950s, the realization slowly began to gain acceptance that serious archaeological work was possible underwater with modern swim diving equipment, sometimes even better than on land, since a site, once covered with sediment , is only exposed to minor disturbances, especially organic Material (e.g. wood) is better preserved through the exclusion of air . In order not to disintegrate within a very short time, it is precisely these materials that have to be stored in the water after being salvaged and then subjected to a complex conservation process. In many cases, a primary goal of an excavation, especially of shipwrecks, is not the complete recovery, but the measurement and securing of individual finds, while the actual wreck is left in place in order to enable further investigations at the site later.

Recently, diving robots have also been used in underwater archeology.

The French underwater archaeologist Franck Goddio plans meticulously, uses magnetometers and emphasizes that for reasons of cost, chance must be reduced to a minimum.

Example of finds in the sea, Møllegabet I + II

Møllegabet I is 2.3 meters below sea level. The place was used by the Ertebølle culture between 4500 and 4000 BC. Used. The first thing that was found was a 60-meter-long and 0.75-meter-high Køkkenmøddinger (clam pile) with the remains of fireplaces. As tools were core and slice axes , blades and arrowheads used, but also Picked and polished stone axes and a sandstone plates came to the surface. Fishhooks , knives, points and picks were made of bone, horn or antler . Moose , roe deer , red deer and wild boar were eaten, but the fur suppliers martens , otters , wild cats and wolves were also killed, as were seals and ducks , ospreys , cormorants , species of gulls , swans and sawsmen . Eel , cod and flatfish are documented among the fish . Oysters , acorns, clams , nuts and snails were collected.

Møllegabet II is 4.5 meters below sea level and only about 25 meters from the first place. Wooden objects were discovered here while diving and systematic dives and excavations were carried out between 1987 and 1993. This place was established between 5500 and 5000 BC. Dated. In addition to the remains of food at place I, remains of hedgehogs and dogs were also found here. The remains of wood from eel sticks, ax shafts, fish spears, hunting bows and fish traps were informative. A presumed boat burial and a 3 x 5 meter floor made of a layer of bark on a latticework of branches were among the spectacular finds.

Underwater excavations are also subject to approval in Germany and may only be carried out by specially trained specialists. The Commission for Underwater Archeology at the Association of State Archaeologists in the Federal Republic of Germany conducts appropriate training.

Underwater archeology has been the subject of exhibitions several times, for example with the exhibition “The wreck. The ancient ship find from Mahdia ”, which was shown in the Rheinisches Landesmuseum Bonn from 1994–1995 and focused on the ship find from Mahdia as a milestone in underwater archeology. The exhibition “ Egypt's Sunken Treasures ”, which opened in Berlin's Martin-Gropius-Bau in 2006 , exhibited various finds from sunken cities of ancient Egypt and was then shown in several international museums. In 2017–2018, the Bonn State Museum presented the special exhibition “Sunk in the Sea. Sicily and Underwater Archeology ”. In Sassnitz on Rügen there is a "Museum for Underwater Archeology".

In addition to various popular scientific publications, documentaries also made the subject known to the public. This includes the 1997 resulting ARD documentation "The treasures of San Diego - diving trip to the past" of the director Torsten Sasse , adhering to the salvage of the sunken 17th century Spanish galleon San Diego by French underwater archaeologist Franck Goddio turns, as well as the In 2010 the Terra-X episode "Treasure Hunt in the Deep - The Underwater Pioneer" about Alfred Merlin and the beginnings of underwater archeology.