The port of Kyrenia

Kyrenia ( Greek Κερύνεια Kerýnia , Turkish Girne , in antiquity among others Keryneia , ancient Greek Κερύνεια or Kyrēnia , Κυρηνία ) is a port city with more than 33,000 inhabitants in the Girne district of the Turkish Republic of Northern Cyprus , of which it is the administrative seat. Formally it is also the capital of the Kyrenia district of the Republic of Cyprus .

Wilbrand von Oldenburg called the city "Schernis" in the early 13th century, which is likely to have come close to the pronunciation of the Greek name at the time, the transcription of which was often Cerines or Cherines . This is why the name Cerine came into Italian . This corresponded with the high medieval tendency in Greek Cyprus to prefer the palatalization of the k before the e .

The area around Kyrenia was already settled in the Neolithic. Ceramic is between 5100 and 4500 BC. Represented only by three finds, two of which come from Aghios Epiktitos Vrysi near Kyrenia.

In the 10th to 9th centuries BC Keryneia became one of the nine city-kingdoms on Cyprus. Keryneia was first discovered in the 4th century BC. Mentioned under this name in the Periplus of the Mediterranean near Pseudo-Skylax and the only tradition that places the city in a larger historical context mentions events from the 4th century BC. At that time, the independent Keryneia was under the rule of an unnamed dynast who, together with other city kings of Cyprus, sided with Antigonus I Monophthalmos against Ptolemy I in the Third Diadoch War . But Seleucus I , an ally of Ptolemy, conquered in 315 BC. The city. In the dynast one would like to recognize the King Themison, handed down by Johannes Stobaius , who Aristotle around the middle of the 4th century BC. To have dedicated his Protreptikos .

In 312 BC The dynastic system in Keryneia was dissolved by Ptolemy and the city and its territory were placed under the control of the Salamin king Nikokreon , a former comrade of Alexander the Great before Tire and an ally of Ptolemy.

The city is mentioned again and again under various forms of name - Keraunia, Corinaeum, Cerinia, Cernia - but these sites offer no further clues to the history of the city. Fragments of Greek and Phoenician inscriptions from Keryneia suggest that a corresponding Phoenician population resided there in addition to the Greek. There are inscriptions on cults for Aphrodite and Apollon , and a gymnasium is mentioned on buildings .

Possibly under the Roman emperor Claudius the city received an aqueduct ; the city is also mentioned in an inscription from the Flavian period. It is not certain whether it had the status of a civitas . In early Christian times the city became a bishopric under the name Kyrenia .

The city became known to archaeologists and ancient historians for the Kyrenia ship , which is located in the city's shipwreck museum. The almost 15 m long ship sank around 300 BC. Chr.

Under the Byzantine Emperor Alexios I Komnenos , the castle was expanded just as much as St. Hilarion and Kantara on the Karpas, as it was feared in Constantinople that the island could be invaded by the Seljuks , who had already conquered large parts of Asia Minor . Insurgents occupy Cyprus in 1092/94, their leader was a certain rapeseed tomato. Johannes Dukas took Kyrenia without major resistance and suppressed the uprising that was directed against the tax regime of Constantinople, but also had its cause in the dispute over jurisdiction between church and state in the judiciary, as the report of Bishop Nikolaos Muzalon shows.

After the island had made itself independent from Byzantium in 1185, the English King Richard the Lionheart conquered the island in 1191 and captured the state treasure in Kyrenia.

The Venetian Fortress of Kyrenia around 1900, Henry Rider Haggard: A Winter Pilgrimage; being an account of travels through Palestine, Italy, and the land of Cyprus, accompished in the year 1900 , London 1901, p. 181

When the Genoese conquered the island in 1373 and King Peter II fled to the Karpas, where he established himself in Kantara, the Lusignan succeeded in recapturing the island from the area around Kyrenia.

The Venetians massively expanded the city's fortifications around 1540 in order to be able to defend the island against the Ottomans. They nevertheless conquered the island from 1570 to 1571. Kyrenia surrendered after Efgenios (Zeno the younger) Synglitico, Count of Rocca, the leader of the Venetian troops, had been killed with his brother Tommaso, the vice-count of Nicosia.

In the 18th century, Ottoman rule was characterized by the purchase of offices, against which there were revolts. The leader of the uprising of 1765 was Khalil Agha, whose supporters began to dissolve in June 1766 in view of the more than 5000 men sent from Constantinople , so that he soon had only 200 men left. They were besieged in Kyrenia, Khalil, who had to give up, was executed.

In 1831 the Ottoman government recorded the male population of Cyprus. There were 123 Turks and 113 Greeks in Kyrenia.

During the clashes between the Greeks and Turks in Cyprus, which turned into open violence in 1963, the Turks stayed in the city, but were forced to stay exclusively in their quarters. In 1973, shortly before the Turkish invasion, there were 1,000 Turks and 2,635 Greeks, plus 257 others. The Greeks made up two thirds of the population.

In 1974, Operation Atilla began in Pentemili Bay, eight kilometers west of Kyrenia, with the construction of a beachhead (Atilla I). 3,000 Turkish soldiers landed on the Escape Beach with the help of landing craft. At the end of the operation, these troops controlled 3% of the island, including Kyrenia, which the Turks called Girne. The city's Greek population fled to the south of the island in July 1974. Resettled Cypriot Turks from the south of the island settled in Girne, among other places. Many Greeks returned in August, but were held at the Dome Hotel until October 1975. From there they were brought to Belapais, but 163 of them stayed in Kyrenia. In February 1976 their number had fallen to 95, in May to 48 and in August 18 of them were still there. In January 1977 there were 16, in January 1978 there were still 13, and in September 1978 seven of them were two Maronites and two Greek Cypriots who were married to Turkish Cypriots. A total of 2,650 Greek Cypriots were expelled from Kyrenia.

In 1978 there were 4,761 people in Kyrenia, but their number has now grown rapidly. In 1996 there were 14,203, in 2006 it was 23,839. This rapid growth is due to strong intra-island and Anatolian immigration. Many Cypriot Turks came from the Limassol and Paphos districts, from Polis / Poli, Jiaz (Ceyhan) / Kidasi, Çakırlar / Terra, Çıralı / Lempa, Dağaşan / Vretsia, Karaağaç / Pelathousa, Susuz / Souskiou and Geroskipou. / Yeroşibuou. What is more, the building boom and the tourism industry created jobs that were filled by Turks, Eastern Europeans, Central Asians and Pakistanis. During the high season, the number of residents increases to well over 30,000 every year.

The Kyrenia Mountains (Turkish: Girne dağları) extend south of the city , a mountain range that is 1024 meters high at its highest point and ends in the northeast in the narrow Karpas peninsula and in the west at Cape Kormakitis .

There are car ferry connections to Taşucu and Mersin , which is also connected by a hydrofoil line.

Girne has been the seat of the Archives of the Turkish Republic of Northern Cyprus since 1974 .

The English-language weekly newspaper Cyprus Observer has been published in Girne since 2005 .

From 1955 to 1960, when Cyprus became independent, the actress Lotti Huber , who later became very well known in Germany, ran the restaurant "The Octopus" at the port of Kyrenia. She reports on this in great detail in her autobiography This lemon still has a lot of juice and also in the semi-documentary Affengeil by Rosa von Praunheim .

The fortress at the port

The Kyrenia ship on a Cypriot 50 cent coin 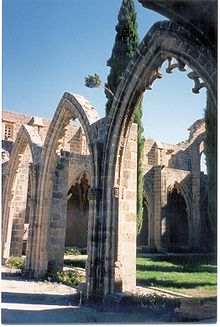 The main attractions of the city include the fortress of Kyrenia , the old town center with its narrow, steep streets and the fishing port with the old lighthouse . With 96 hotels, the district capital is the most important location for the tourism industry in the Turkish Republic of Northern Cyprus.

The city has three museums:

Also particularly worth seeing are: