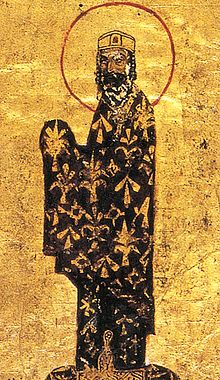 Alexios was the third eldest son of the Domestikos of the Scholen Johannes Komnenos and Anna Dalassene and thus a nephew of the Emperor Isaac I. He served as a general under the Emperors Michael VII. Dukas and Nikephoros III. Botaniates. Before the pursuit of the latter, Alexios fled to the army , was proclaimed emperor by the latter, conquered the capital and dethroned Nikephorus.

On April 4, 1081 the new ruler was crowned emperor by Patriarch Kosmas I. By marrying Irene from the influential Dukai family , Alexios I Komnenus secured his rule. The co-emperor Konstantin Dukas Porphyrogennetus, who was deposed as an infant by Nikephorus in 1078, was involved in the government until the birth of the heir to the throne John ; he made his older brother Isaak Komnenos vice-emperor under the newly created title of Sebastokrator . He relied on Constantine's great uncle, the emperor Johannes Dukas , as an advisor. His brother Nikephoros Melissenos who had sought also to the imperial throne, Alexios confessed to the Kaisar to -Würde. He made peace with the Seljuks in order to turn against the Norman Duke Robert Guiskard , who had invaded the empire . Against this he allied himself with the Venetians , to whom he granted rich trading privileges, and with the Roman-German Emperor Henry IV , but was defeated at Durazzo . Robert now penetrated victoriously as far as Macedonia , but had to return to Italy in 1082, threatened by the progress of Henry IV in Italy and by an uprising in Apulia , whereupon his army, left behind under his son Bohemond , was almost completely destroyed by Alexios. Robert renewed the attack in 1084, defeated the united Venetian-Byzantine fleet at Corfu , but died in 1085, after which his army returned home.

Alexios had to fight 1088-1091 against the Pechenegs , who had advanced across the Danube , which he finally defeated after changeable battles. Against the Seljuks he sought support from Pope Urban II and the occidental princes. Pope Urban II then called on November 27, 1095 in Clermont-Ferrand for a crusade . But when the crusaders appeared in the empire in 1096, they did not find the desired reception. Alexios, worried by the large number of crusaders and at the same time striving to protect the interests of the empire, demanded the feudal oath from the princes who appeared before Constantinople for the lands to be conquered by the Muslims, knew how to enforce this with great skill, even if by no means completely . But a lot of conflicts and dangers for his empire arose from this relationship (a new incursion of Bohemond 1107-1108 was repulsed and ended with the Treaty of Devol ), which were not settled when Alexios died on August 15, 1118.

With his request for help to the west, Alexios had, so to speak, opened “Pandora's box”, albeit unintentionally. The existence of this request for help is, however, controversial, since Anna Komnena in her work Alexias , the only source on the First Crusade from a Byzantine point of view, does not mention the missive and particularly emphasizes the surprise and dismay of the Basileus when he heard rumors of the approach of the Crusaders. In modern research, however, it is emphasized that the Byzantines could hardly have escaped the almost year-long preparations for the crusade, especially since Alexios had good relations with Hungary and Venice. It is more likely that Alexios acted cautiously in order to be prepared for all eventualities, even if the Byzantines realized quite early on what the goal of the crusade was.

Nevertheless, Byzantium was again a power to be reckoned with. In the interior of the empire, which he found in a shattered state, he established order. He improved the finances and carried out a comprehensive coin reform in 1092 in order to stop the hyperinflation already inherited from his predecessors (the gold content of the histamenon and tetarteron fell below 8 carats ) and to restore confidence in the Byzantine currency . In contrast to earlier Byzantine coin reforms, this one was comprehensive and affected all coin types. He also improved the army , favored the church and persecuted the heretics ( Paulikians and Bogomils ). However, Alexios failed to take complete control of Asia Minor ; Byzantium remained there restricted to the coastal regions. His daughter Anna Komnena described his life (albeit glorifying) in the history work Alexias .