Nikephorus III. replaced the emperors from the Doukas family , but tied to them by marrying the wife of the emperor Michael VII , while the deposed emperor was forced to enter a monastery. During his three-year reign he was unable to repel external enemies, nor could he stop internal disintegration. Only his successor Alexios I Komnenus was able to establish a new dynasty and consolidate the empire.

For the Byzantines, the battle of Manzikert (today Malazgirt ) in 1071 was a catastrophe, for the Turks, however, it was the beginning of their state existence in Asia Minor. As such, victory is still celebrated today. The stamp on the nine hundredth anniversary of the victory in Malazgirt on August 19, 1971 shows Sultan Alp Arslan with his victorious soldiers on the battlefield of Manzikert.

Emperor Nikephorus III. ruled in the extremely difficult years for Byzantium after the great defeat suffered by Emperor Romanos IV on August 19, 1071 in Manzikert against the Turkish Seljuks who invaded eastern Anatolia . As a result of the severe defeat, Romanos IV was replaced by Emperor Michael VII in Constantinople, while at the same time the Seljuks advanced further into the interior of Asia Minor without encountering major resistance. The new emperor preferred to keep his troops in the capital instead of risking them and thus his rule in the fight against the invaders, and the provinces were too weak and, above all, too disorganized to be able to defend themselves on their own. At the same time, the Pechenegs in the north used the favorable opportunity and crossed the Danube border, while in Italy the Normans conquered Bari , the capital of Byzantine lower Italy, in this fateful Byzantine year of 1071 and thus took the last remnants of the empire's possessions there.

The government in Constantinople watched this collapse more or less paralyzed. Small and large uprisings accumulated in the remaining provinces. Some of the rebels moved against Constantinople, others went into business for themselves, for example the Armenian general Philaretos Brachamios , who took Antiocheia and established his own rule in the former border area, which would last into the 1980s. In Trebizond could Theodore Gabras achieve similar, others followed. The authority of the central government was falling apart at breakneck speed, partly because of the advance of the external enemies, but also largely because the emperor was unable to rally the remaining forces and mobilize against the invaders. The overthrow of Michael VII and the accession of General Nikephorus III to the throne also changed this. Botaneiates 1078 nothing. 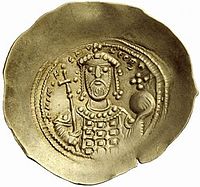 Gold coin ( electron -histameon) of the emperor Nikephorus III. Due to the hyperinflation , the gold content was only 8 carats (33%).

Nikephorus III. Botaneiates belonged to a family which claimed to be of the Byzantine family of Phocas . He served as a general under Emperor Constantine IX. and played an active role in the usurpation of Isaac I Komnenus against Emperor Michael VI in 1057 . In 1064 he defended the Balkan border against invading Oghusen together with Basil Apokapes the strategos of the military district Paristrion . Finally, under Emperor Michael VII , he became strategist of the Anatolicon military district and commander of the troops of Anatolia .

When in 1077/78 no less than three pretenders against Emperor Michael VII appeared almost simultaneously , the already elderly Nikephorus III. Enforce Botaneiates. With the tacit tolerance of Suleiman , the leader of the Seljuks , Nikephorus III marched. to Nicaea , where he was proclaimed emperor on January 7, 1078. His accession to the throne was approved despite opposition from the nobility and clergy . With the support of Alexios Komnenos he was able to prevail against the usurpers Nikephoros Bryennios and Nikephoros Basilakes . Michael VII had to abdicate and go to the studio monastery . Michael's wife Maria von Alania first fled to a monastery with her son Konstantin Dukas Porphyrogennetos .

When Nikephoros' wife died, he married Maria von Alania , the wife of the deposed Emperor Michael VII, and initially appointed her son Konstantin Dukas Porphyrogennetus as his possible successor.

Given the desperate situation of the Byzantine Eastern Front, Emperor Michael VII. His Norman enemies had Robert Guiscard , although he had conquered the Byzantine southern Italy offered Robert Guiscard daughter Olympias (from the engagement Helena called), with his son the Byzantine heir Konstantin Dukas Porphyrogennetos to to marry. This marriage did not come about due to the intervention of the new emperor Nikephoros III., Who sent Olympias to a monastery, and led to Robert Guiskard, under the pretext of protecting the rights of Constantine and Olympias, doubting the emperor's legality in Constantinople and then covered the Byzantine Balkan possessions with a war that was supposed to bring Byzantium to the brink of disaster.

The financial situation also became increasingly precarious. So accelerated under Emperor Nikephorus III. the devaluation of the Byzantine gold standard, which began slowly from Emperor Michael IV (1034-1041), rapidly to only 8 carats (33%). This hyperinflation was a reflection of the precarious economic situation in which Emperor Nikephorus III. found who tried desperately with generous gifts to secure followers.

The food supply in the capital also became increasingly difficult, although Nikephoros's order to burn down state warehouses, which were set up under Emperor Michael VII to monopolize the grain supply, did not improve.

Nikephoros finally had to deal with Alexios Komnenos, Nikephoros Melissenos and the Seljuk Sultan of Rum . Alexios Komnenos used his influence in the army to force Nikephorus to abdicate. This withdrew to the Peribleptos monastery in Constantinople.

The history of Michael Attaleiates is dedicated to Nikephoros and is an important source for his reign.

The following illustrations come from a manuscript of the homilies of John Chrysostom , which was written between approximately 1071 and 1081.