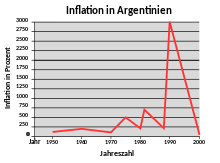 Hyperinflation is a form of inflation in which the price level increases very quickly. There is no generally accepted definition, but a rule of thumb established by Phillip D. Cagan in 1956 of monthly inflation rates of 50% (equivalent to an annual rate of around 13,000%) is widespread. Put simply, hyperinflation is uncontrollable inflation with an extremely high monthly rate. In most cases, hyperinflation only lasts for a short time and ends in a currency reform .

Before the 20th century, hyperinflation was rare, because when a certain level of inflation was exceeded , the economies would switch to unminted precious metals as a substitute for money or to exchange in kind . The increasing spread of uncovered money ( fiat money ) made hyperinflation possible. The cause of (hyper) inflation is always the state. If a state does not collect enough taxes to finance its expenditures, a budget deficit arises because it has to permanently borrow to cover its expenditures (fulfillment of performance promises). He can cover this deficit with debt instruments, government bonds . Most government bonds are unindexed nominal bonds .

If prices rise relative to the bonds, the nominal value of the bond remains the same. As a result, it relatively loses value. Investors suffer a real loss, but not a nominal one. Conversely, the issuer, the state, can repay a smaller real repayment value and thus make a real profit. In doing so, the state is trying to reduce its budget deficit. Governments can use monetary policy to control inflation and thus contribute to the desired effect. In the event of sudden and rapid increases in inflation, long bonds can be repaid relatively cheaply by the state because they do not provide a framework for legal changes. However, as a result of the higher inflation, new creditors are asking for higher nominal interest rates on new bonds, and their trust in bonds with a long maturity is also being lost. This will shorten the terms of the newly issued bonds. In order to pay for old bonds and to finance the new high nominal interest rates, governments have to issue more and more new bonds in order to obtain new capital. If there are still deficits in the budget, the government will have to start all over again. Ultimately, a government slips into hyperinflation with its currency and ultimately undermines trust in it.

While normal inflation is mostly justified by economic causes, hyperinflation is almost always associated with severe economic shocks as a result of war, civil war or social upheaval. The Soviet hyperinflation from 1919 to 1922 aimed to abolish money as a means of payment.

The alleged "economic war" that Hugo Chavez started in Venezuela in the 2010s against imaginary enemies lasted until autumn 2018 for hyperinflation, in which the vendors' suppliers set new prices every three hours. 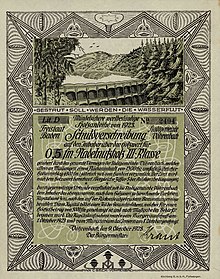 As with inflation, investments in foreign currencies can be made very quickly. In order to stop the associated flight of capital , foreign exchange control and massive foreign exchange restrictions occur during hyperinflation . In view of the global cashless payment traffic that has been possible since the end of the 20th century, however, such measures are only possible to a limited extent.

Hyperinflation often leads to a “flight into real assets” for investors and to a large loss of all other financial investments such as cash and cash equivalents. B. Bonds denominated in the relevant currency. Since the sharply increased demand typically leads to an increased shortage of supply, this is a self-reinforcing process.

Real assets are primarily real estate and raw materials , but also precious metals or stocks. The consequence is often a temporary shortage of means of payment, for example when the customers of a bank withdraw all of their savings.

Hyperinflation places a special burden on a society. Not all prices and wages increase equally, so inflation affects the income distribution in a society. Wealth is thus transferred from the lender, for example the lender or lender, to the borrower, for example the borrower or borrower. Debts no longer have the same purchasing power as they did when they were incurred. The real interest rate typically falls as well. For example, payments to pensioners are not adjusted to the price level, they lose their purchasing power in times of sharp price increases and are often pushed to the edge of the subsistence level. Any savings that have been saved for years suddenly have significantly less purchasing power. A very high rate of inflation thus divides society.

Relative prices could no longer show the real scarcity of goods; this can come about, for example, with rigid state interventions. As a result, it is hardly possible for consumers to find out the cheaper price; their demand behavior is severely impaired. This makes markets inefficient and can no longer allocate resources optimally.

The constant fluctuations in the price level result in price adjustment costs, companies have to adjust their price lists so often that they can no longer offer at fixed prices. Individual behavior that is inefficient from a societal point of view now becomes rational.

Distortions make it more difficult to make rational decisions about the future. Very high inflation creates uncertainty and opaque market situations, which is why companies reduce their long-term capital investments, such as in research and development. However, because such investments are important to new technology development and competition, they are associated with economic growth and prosperity. Thus, high inflation reduces economic growth and thus the standard of living in the long term.

Due to the time difference between the generation and the time of payment of taxes, real tax losses are realized that would not play a significant role in the case of moderate inflation.

The daily shopping of consumers is also problematic, because of the large amounts of money, consumers have to carry a lot of physical money and pay with it. As a further consequence, the official means of payment is being displaced by exchanges in kind or unofficial currencies.

In such situations the so-called sole effect occurs, which describes the waste of resources by reducing the cash holdings. Business people waste a lot of time and energy organizing their cash management. This means that fewer factors are available for the production of goods.

See also inflation and its effects .

In order to stop hyperinflation, a government must sustainably and credibly restore confidence in its own currency.

The following theses are discussed in economics :

In a hyperinflation, credibility in the government and the central bank is weakened. There is often a change of government in order to strengthen or regain public confidence. A strongly austerity fiscal policy and the reduction of budget deficits in the state budget is currently the predominant motive for action to strengthen confidence in a currency.

An explanation for the rise in the general price level during hyperinflation is provided by Irving Fisher's quantity equation :

This formula can be transformed into:

The price level rises accordingly, among other things.

The weak empirical evidence of this theory was demonstrated by the Japanese deflation and, most recently, by Ingo Sauer's research on hyperinflation.

There are several historical episodes of hyperinflation with monthly inflation rates in excess of 50 percent. examples are

There was also severe inflation before the 20th century: