The Greek drachma is a modern currency unit in Greece that was valid from 1831 to 2001. From 1923 the drachma was issued by the Bank of Greece .

Drachm ( Greek δραχμή drachmí, plural δραχμές drachmés; derived from δράσσειν, Attic δράττειν, “seize, take”; literally “taken” in the sense of “a handful”) is an ancient unit of weight and coin.

Front and back of a tetradrachmon

The ancient drachma (Pl. Δραχμά) denotes a unit of weight and coin made of silver , rarely made of copper and gold ( Ptolemy ). It was spread throughout the entire Hellenic culture and was shaped by many cities. The first coins show images of animals, which were mostly the speaking coats of arms of the cities and go back to the 6th century BC . 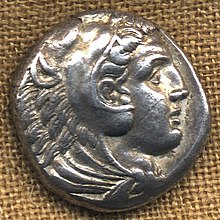 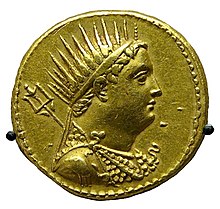 Gold octadrachm with the portrait of Ptolemy III. 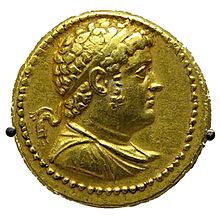 Gold octadrachm with the portrait of Ptolemy IV.

Due to the embossing technique, drachmas are mostly flat on the back and very sculptural on the convex front. The embossings show a high artistic level and are very finely worked. This led to the fact that beautiful coins have been collected since the Renaissance . Drachmas were often minted without any inscriptions. The dating can only be carried out on the basis of stylistic features and is not very precise.

The ancient coin system was based on silver as a coin metal and the Near Eastern mass unit of talent , which was divided into 60 mines. Some cities minted 100 drachmas silver from a mine, others 50 stater . Artfully designed mines were minted, but were far too large and valuable for everyday use. In addition to 1-drachms, there were tetradrachms (4 drachms) in the eastern area and didrachms (2 drachms) in Magna Graecia (southern Italy, Sicily ). Occasionally decadrachms (10 drachms) were minted, and in the Hellenistic period also Ptolemaic octadrachms (8 drachms) in gold. Quite often the hemidrachm (half drachm) was equal to 1 tribolos (coin worth three oboloi). The obolus (old Greek ὀβολός obolós, plural ὀβολοί oboloí ) is the smallest unit, which, however, has occasionally been split up into further units, up to the eighth obolus ( Chalkus , old Greek χαλκός "copper").

The modern Greek drachma (gr. Eλληνική δραχμή) is the former currency unit of Greece . The subunit was the lepto (λεπτό (ν), plural λεπτά); 100 lepta equals one drachma. ISO 4217 code was GRD. The currency symbol of the drachma was ₯ (often written as Δρ).

The first drachma and the Latin Union of Coins

The drachma was introduced as Greek currency in 1831 and replaced the phoenix (Greek Φοίνιξ), which was the first currency in Greece from 1828 to 1831 after gaining independence from the Ottoman Empire . The name comes from the ancient coin and weight unit drachma.

From 1868 Greece was a member of the Latin Monetary Union . This pegged the drachma to the other currencies of the Union at a ratio of 1: 1. The regulation excluded paper money ; Italy and Greece used this loophole to increase the circulation of paper money, for which there was no longer any precious metal cover . Greece was punished and excluded for this practice, but was reinstated two years later.

The second and third drachma

In the 1980s, the inscriptions on bills and coins were changed to the current language form ( Dimotiki ). Exceptions were the 50 and 100 drachma notes, which were still labeled in Katharevousa . After the 50 and 100 drachma coins were issued, they should be withdrawn from circulation. Since these notes had a high symbolic value, especially due to their long circulation, they continued to be issued, and their role was comparable to the 5-mark note in Germany.

Among the coins, the golden commemorative coin from 1996 for the 100th anniversary of the modern Olympic Games had the highest nominal value with 20,000 drachmas . The last minting was a 1 drachma coin in 2000 in gold weighing 8.5 grams instead of copper.

Transition to the euro

In 2001 Greece joined the European Monetary Union , two years after the eleven founding members. The drachma was thus tied to the euro at the rate of 340.750 GRD = 1 EUR. In 2002, at the same time as the other euro countries, euro cash was introduced and the drachma disappeared. However, the name Lepto was adopted as the Greek name for the euro cent and was also struck on the reverse of the Greek euro coins .

Precursor currencies of the euro

1 Monaco , San Marino and Vatican City are not part of the European Monetary Union , but mint their own euro coins to a limited extent due to bilateral agreements.