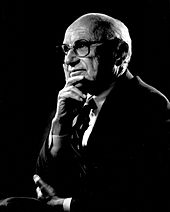 Milton Friedman (born July 31, 1912 in Brooklyn , New York City , † November 16, 2006 in San Francisco ) was an American economist who wrote fundamental works in the fields of macroeconomics , microeconomics , economic history and statistics . He received the Alfred Nobel Memorial Prize in Economics in 1976 for his achievements in the field of analysis of consumption , the history and theory of money and for his demonstration of the complexity of stability policy . Friedman is considered the most influential economist of the twentieth century , alongside John Maynard Keynes .

Friedman, who considered himself a classical liberal , particularly emphasized the advantages of a free market and the disadvantages of state intervention. His basic attitude is expressed in his bestseller Capitalism and Freedom (1962). In it he called for the role of the state to be minimized in order to promote political and social freedom. In his television series Free to Choose , which PBS aired in 1980, Friedman explained how the free market works and emphasized in particular that other economic systems could not adequately solve a society's social and political problems.

Friedman was a professor at the University of Chicago . He was a student of Frank Knight . Legal scholar David D. Friedman is his son and Patri Friedman is his grandson.

Friedman was born in New York to Hungarian Jewish immigrants. He spent his childhood and youth in Rahway , New Jersey . At the age of 16 he began studying mathematics and economics at Rutgers University in New Jersey. In 1932 he graduated with a Bachelor of Arts . He decided to continue his studies at the University of Chicago with a focus on economics. There he received the title Master of Arts .

Friedman published several articles in professional journals, u. a. in the Quarterly Journal of Economics at Harvard University . In 1943 he went to the Division for War Research at Columbia University where he mainly worked in mathematical statistics . His dissertation entitled Income from Independent Professional Practice addressed the economic situation of members of the liberal professions. He submitted it in 1945 and received his doctorate in 1946 . From 1941 to 1943 he was also a consultant for the tax research department of the US Treasury Department (National Bureau of Economic Research) .

In 1938 he married the economist Rose Director . Their daughter was born in 1943 and in 1945 their son David , who became a lawyer. In 1946 Milton Friedman began teaching at the University of Chicago, which he held until 1976. During this time, the term “ Chicago School ” was formed in the economy and Friedman coined it significantly.

Friedman attended the founding meeting of the Mont Pelerin Society (MPS) in April 1947 . Friedrich von Hayek had invited him and 35 other scholars close to liberalism - economists as well as some philosophers, historians and politicians. From 1970 to 1972 Friedman was President of the MPS. In the 1950s he studied the theory of demand policy from John Maynard Keynes . His review of the same appeared in 1957 under the title A Theory of the Consumption Function . In 1957 Friedman was elected to the American Philosophical Society , 1959 to the American Academy of Arts and Sciences, and 1973 to the National Academy of Sciences . In the 1970s, his supply-side economic theory came into competition with the model of Keynesianism . According to Gerhard Willke , Friedman, together with Friedrich von Hayek, was “a pioneer and master thinker of the neoliberal project ”, an economic and political project to achieve more market, more competition and more individual freedom. Friedman, however, did not call himself a neoliberal.

A Monetary History of the United States, 1867-1960 , published in 1963 and written with the economist Anna Schwartz , is considered to be his main work . Darin Friedman described the huge impact of money supply changes on economic cycles and thus denied the Keynesian explanation of the Great Depression . According to Friedman, this is not due to the instability of the private sector, but to the monetary reduction of the Federal Reserve System . In the following years Friedman became known to a wide audience through popular scientific treatises, in particular through the 1963 book Capitalism and Freedom . He also worked as a columnist for Newsweek magazine in the 1960s and 1970s . In 1967 Friedman also served as President-elect of the American Economic Association . In the 1980s Friedman and his wife designed several television programs on economic issues (title Free to Choose ).

Friedman was also involved in political decisions. In 1971, after the collapse of the Bretton Woods system , the US government under President Nixon, on his advice, abolished the fixed exchange rate of the US dollar against other currencies. The stabilizing effect Friedman had predicted soon materialized. He also actively supported numerous referendums to reduce taxes. He was also a firm opponent of drug prohibition. In 2005 he, along with 500 other signatories, advocated the legalization of marijuana in an open letter to the US government ( George W. Bush Cabinet ) .

In 1977, after his retirement in Chicago, Friedman moved to the Hoover Institution at Stanford University , where he worked until his death. In 1988 US President Ronald Reagan presented Friedman with the Presidential Medal of Freedom , the highest civilian honor in the USA. Friedman spoke about current economic developments well into old age. So he expressed z. For example, when the euro was introduced in 1999, the thesis was that the first global recession would tear it apart. This prognosis turned out to be wrong; the euro survived the global financial crisis and the economic crisis of 2008/2009 .
Friedman died of heart failure at home in November 2006.

As a representative of economic liberalism , the freedom of the individual was at the center of Friedman's argument. He considered the free choice of the individual to be more beneficial than state regulations. He therefore supported a reduction in the state quota , free exchange rates , the abolition of state trade restrictions, the lifting of access restrictions to certain professional groups and a reduction in state welfare. Friedman also put forward the luxury good hypothesis of money.

He described the tasks of the state as follows:

“A state that upheld law and order, defined property rights , served as a medium through which we could change property rights and other rules of the economic game, settle disputes over the interpretation of the rules, enforce the performance of contracts, promote competition , a Provided monetary constitution, carried out activities to counteract technical monopolies and deal with such neighborhood effects, which are widely regarded as sufficient to justify state intervention , and which complemented private charity like the family in the endeavor to help the underage, whether mentally disabled or child protect - such a state would clearly have important functions to fulfill. "

He took up the idea of negative income tax from Juliet Rhys-Williams from the 1940s in the 1960s . According to this, the tax office would transfer a certain percentage (max. 50%) of the difference to every taxpayer whose income tax liability is below a specified minimum without further checks.

In addition to the core areas of economics , Friedman also advocated more freedom in other areas. He always advocated the abolition of compulsory military service in peacetime, advocated the legalization of drugs, etc. a. of marijuana and fought for an education voucher model .

Murray Rothbard comes to the conclusion in the 1971 essay Milton Friedman Unraveled that it is difficult to see Friedman as a representative of the free market economy .

Friedman's theory of the natural unemployment rate postulates a “natural rate of unemployment” for every economy, which is determined by the institutional conditions: frictional and structural factors as well as imperfections in the market such as information deficiencies, mobility barriers, adjustment costs and demographic change. In the long term, however, the rate of natural unemployment can be reduced through structural reforms. In the ideal case, i.e. in a perfect market , it is zero.

As a result, there is in reality no trade-off between fighting inflation and employment policy, as economic theory had previously claimed. A monetary policy with the aim of full employment is thus doomed to failure and in the worst case leads to an increase in inflation.

Milton Friedman is considered a leading proponent of monetarism . At the center of his monetary theoretical considerations is the thesis that there is a fixed long-term relationship between money supply and inflation (or deflation ). For him, inflation is a purely monetary phenomenon that the central bank can counter by strictly controlling the money supply. He took up the idea Walter Eucken on banks a 100 percent reserve prescribe.

At the same time, he rejected financial policy as an instrument of demand management. According to his theory, inflation always arises when the money supply grows faster than the value added in the real economy . Government spending to stimulate the economy would fizzle out in the medium term. The countercyclical fiscal policy, which is often attributed to Keynes , to cushion economic fluctuations cannot therefore work. Two of his major contributions to the economic debate are Quantitative Theory of Money and The expectations-augmented Phillips curve (the Phillips curve ).

In Rose and Milton Friedman's Opportunities I Mean (1980), he identifies the welfare state and inflation as the greatest enemies of the economy.

For Friedman, the welfare state is a betrayal of the people who still work and pay taxes. To this end, he showed the methods in which money is spent:

For him there is a clear divide between the methods from one to four. The carelessness with which people deal with money clearly increases from one to four. For Friedman, methods three and four are the cause of inflation and the cause of the decline of western industrialized nations. With the claim to support the poor, the welfare state with its powerful welfare bureaucracy is pulling money out of the pocket of the man in the office and at the workbench. But if you divide the amount that was spent in the United States to combat poverty until shortly before 1980 by the number of people who are needy according to official statistics, then the income of these needy people should be one and a half to twice as high as the average Population income. In reality, little would be left for the needy. Because the money is mainly used for bureaucracy and personnel costs.

Friedman was the mentor of a group of Chilean economists, the Chicago Boys, named after the Chicago School . Under the military dictatorship of Pinochet in Chile, these decisively determined a new liberal economic order that was based on Friedman's ideas. The fact that a military dictatorship established a liberal market economy was what Friedman later referred to as the “miracle of Chile”. When Friedman visited Chile in 1975, he met Pinochet briefly. Friedman was heavily criticized for not accusing Pinochet of the dictatorship and human rights violations, and protests broke out at the 1976 Nobel Prize in Economics. Orlando Letelier , a former minister in the Allende government, overthrown by Pinochet , accused Friedman of double standards in his understanding of "freedom" with regard to Chile in a 1976 report for The Nation . Friedman later stated that the Pinochet military dictatorship was a "terrible" regime. In the development of Chile towards democracy, he saw his conviction that free markets produce a free society confirmed. The economist Andre Gunder Frank , who himself did his doctorate at the University of Chicago, criticizes, however, that the implementation of the reforms proposed by Friedman and his colleague Harberger in Chile was only made possible through violence and political terror.

In her book, The Shock Doctrine (German: The Shock Strategy ), Naomi Klein addresses the negative consequences of the Chicago School philosophy on other countries. As one of several examples, she also cites Friedman's influence on the Chilean economy under Pinochet. Contrary to popular belief, the reforms recommended by Friedman have clearly worsened the situation for the majority of people.